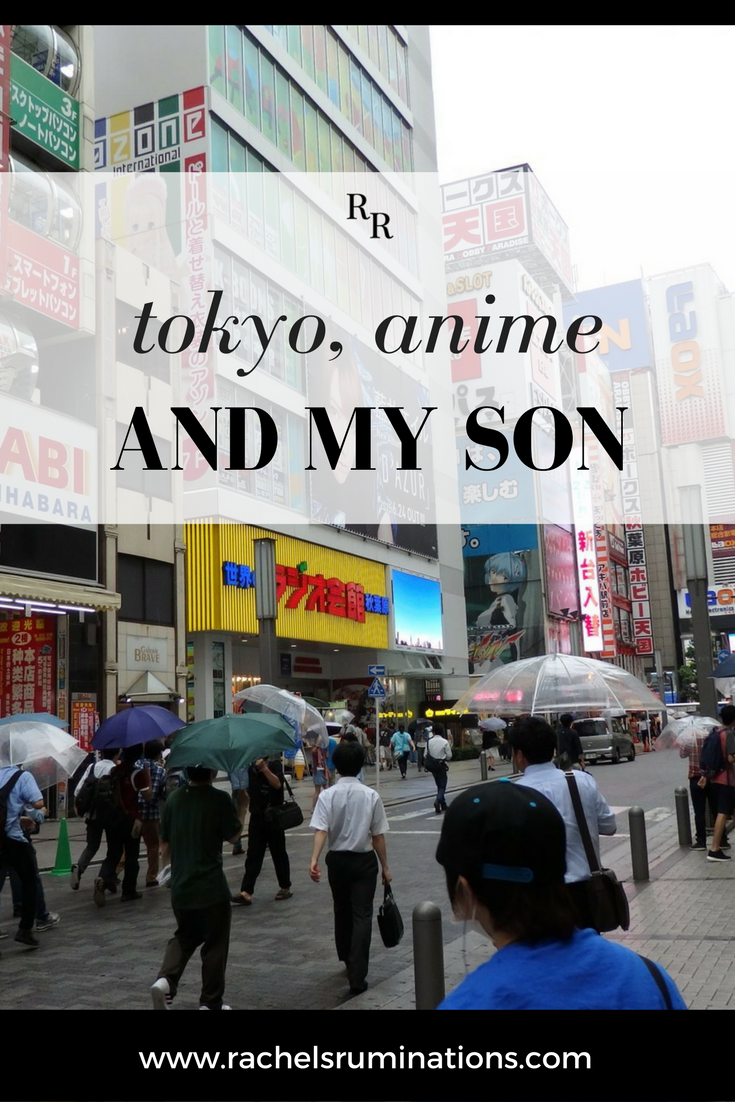 My 17-year-old son, Robert, is not a traveler. That’s not to say that he hasn’t traveled, however; we’ve dragged him along with us on vacations all his life. Rather, he just isn’t particularly interested in travel.

When I ask Robert where he would like to travel, the first place on his list is Tokyo. Why? Because of his interest in Japanese animation and games — or, as he says it, anime and gaming.

I’d like to be the one to take Robert there. When I spent a week in Tokyo by myself last year, I missed Robert’s version of the city completely. His impression of the city comes mainly from the anime he watches and games he’s played, neither of which I understand. Spending another week or so in Tokyo learning about anime, games, and the subcultures built around them would be an eye-opener for me.

Cosplay (a portmanteau of “costume play,” or costume-based performance art), for example, often takes anime and video games as its inspiration. While in Tokyo, I saw young people dressed in bizarre outfits, but Robert is much more likely to recognize the references than I ever will be. I didn’t dare approach cosplayers to ask to take their pictures, but he could do it.

Tokyo, Robert says, is the center of anime and gaming, and it’s also “an extreme place” in that it’s technologically modern — even futuristic.

I got a glimpse of that technology when I walked through the Akihabara area: all flashing lights, wildly dressed young people, and animated advertisements. But I didn’t go into any of the shops, since I felt very much an outsider — and an old one at that. When traveling with Robert, I could follow his lead, exploring and learning about anime and gaming from the source.

There’s even an anime center in Akihabara, which I would never have dared to enter by my middle-aged self. With a teenager leading the way — and explaining it as we go — it would be fascinating!

I asked another young man I know, an ex-student of mine who is in his mid-20s, what he thought of Tokyo after his recent visit, and his answer eloquently expressed my view:

Tokyo is a place where the archaic struggles to compete with the new, and the crazy complements the traditional. (Daniel Craanen)

My instinct when I travel is to explore the archaic and traditional. That’s what I did in Tokyo. I visited the Yanaka neighborhood, which is filled to the gills with small temples. I strolled through several gardens, which are steeped in Japanese traditions. I even stayed in a ryokan, a traditional Japanese inn that originated hundreds of years ago, where guests go barefoot and sleep on the floor on futons.

While all of this tradition was fascinating, when I return with my son, modernity — or perhaps I should say futurism — will be the theme. I will certainly sleep better in a bed than I did on a futon, so a Western-style hotel in Tokyo would suit me. Akihabara, the anime center, perhaps a maid café or cat café, photographing cosplay enthusiasts — these would form the structure of our trip to Tokyo.

And eating. If there’s one thing Robert and I can agree on, it’s food, even when it’s not modern or futuristic. I loved the street food in Tokyo; the most delicious and varied ramen noodle soups are available in simple street cafés. They’re filling, they’re fast, and they’re cheap — and both he and I would enjoy them.

If this neighborhood interests you and you don’t have a Robert for your personal guide, you could take a tour, complete with a guide dressed as a maid.

Here’s another, without a maid guide but with sushi.

Would you like to travel (or travel back) to Tokyo? What draws you there?