The 9/11 memorial was on my “To Do” list today. I went there once before, though I’m not sure exactly what year it was. At the time, it was just one huge pit in the ground. It had been cleared of debris, but nothing had been built on the site yet.

I’m not sure why I decided I had to go there again. Something seemed to draw me there, and, judging by the crowds joining me in line, other people felt the same compulsion. I know I was curious as to what progress had been made on rebuilding the site. I had heard vaguely that a memorial had been built there, but the buildings were what drew my interest.

Yesterday, when we arrived at the airport, the driver of our shuttle pointed out the tallest, shiniest building and told us it was the World Trade Center, and told us that it was 1776 feet tall, which led to a quick quiz from me about what that number meant. These students traveling with me have all taken my American Studies lessons, but only one had the right answer: “When the Declaration of the Independence was written.”

Why do we go there? Why has this become an obligatory stop in the tourist itinerary? Why did I go there and look at that big hole in the ground years ago, and why did I go look at what’s replaced it? 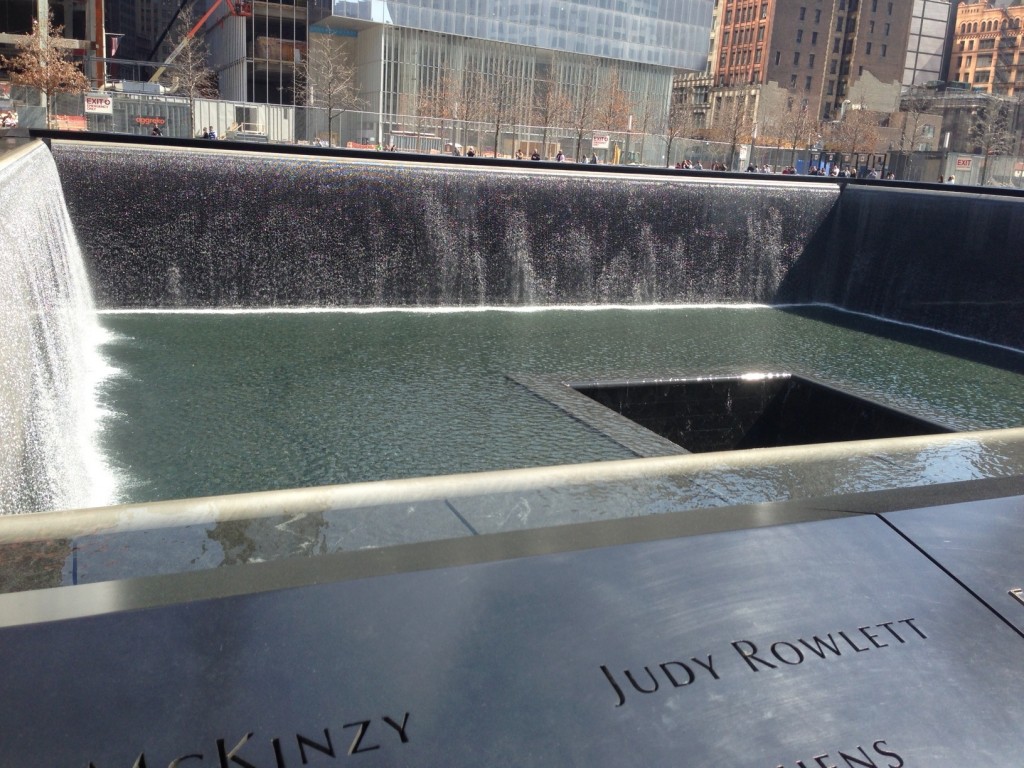 Fountain at the 9/11 memorial

Interestingly, the new memorial is also a hole in the ground, or rather two. They are the size of the original footprints of the two towers that collapsed, and are remarkably effective memorials. The square holes are surrounded by a bronze frame (called parapets in the tourist brochure), engraved with the names of those who died in the towers, on the flights and on the ground. From ground level on all four sides, waterfalls flow in smooth sheets into the hole, 30 feet below. Then the water drains down a smaller square hole in the middle, so situated and so deep that from standing at the frame, even if you lean forward as far as possible, you can’t see the bottom of the hole. A figurative abyss. 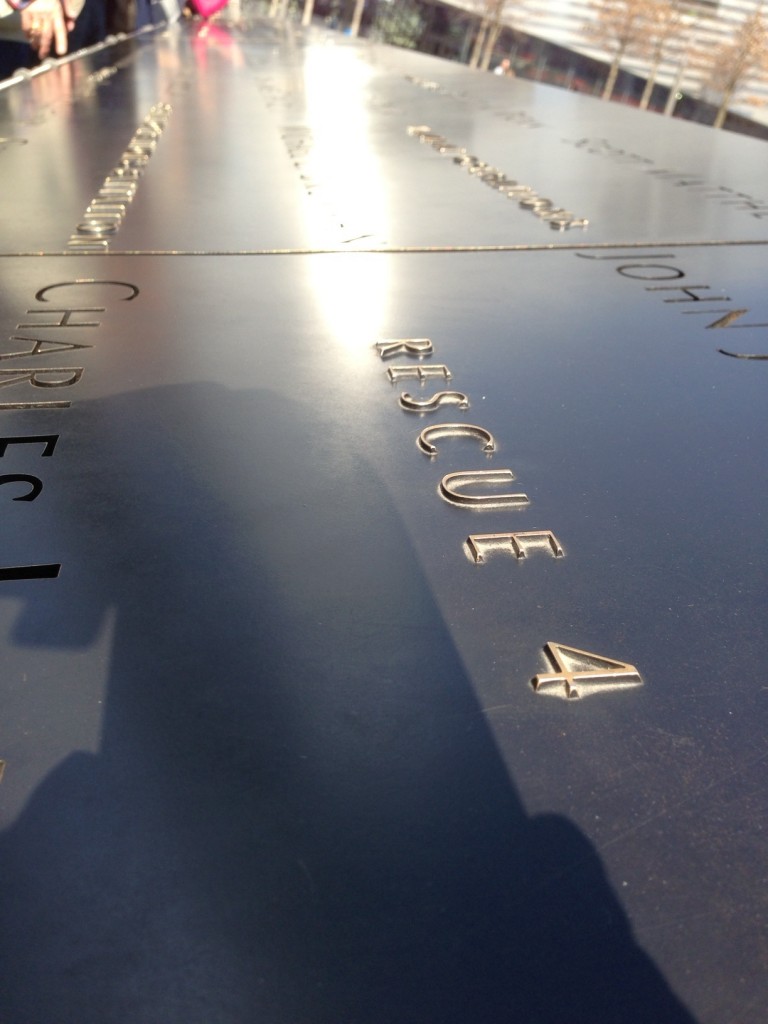 Names along the edge of the memorial fountain

Some people walked along the bronze frame, reading the names, noticing how the names of family members were placed next to each other. Others were taking pictures of the “survivor tree,” the only tree that survives from the original park on the World Trade Center site. Some were sitting on benches scattered around the site, and some were clearly fighting tears. So was I.

I don’t know anyone who died that day. I doubt any of the people at the memorial this morning knew anyone who died that day. Yet we all grieve. I spent the rest of the day today pondering why. We may grieve when there are other tragedies: the Oklahoma City bombing in 1995, for example, or the recent massacre at Sandy Hook Elementary School. Yet we don’t make pilgrimages to where those tragedies happen. Many people, I expect, don’t even remember the Oklahoma City bombing anymore.

If we compare 9/11 to Sandy Hook or Oklahoma City, they all made us feel horrified and helpless and terribly, deeply sad. All of them were attacks on the innocent, and that touches us because we identify with the innocent.

The difference, it seems to me, is the nature of the attack. While we mourn any such large-scale attack on the innocent, 9/11 was bigger, not just because more people died. Oklahoma City and Sandy Hook were both carried out by home-grown terrorists: Americans. 9/11, on the other hand, was an attack from outside.

America has been tremendously fortunate that, mostly just because of geography, it hasn’t been attacked by other hostile countries, or at least not since Pearl Harbor. Before 9/11, America was supremely confident of its own strength and safety: its invulnerability. 9/11 destroyed that. Suddenly, every American felt vulnerable. While Americans identified with the victims in Oklahoma City and Sandy Hook as well, in this case they felt personally attacked. The 9/11 terrorists were aiming at every single American, and their way of life. That typical American confidence is exactly what they were attacking, and they succeeded.

Anyone who mourns a loved one they’ve lost will understand that grieving is a long process. And part of that process involves marking the loss in some way. When we’re talking about an individual person, that will usually involve visiting the cemetery where the person is buried, or some other location that was important in the person’s life.

This location in New York has become our gravestone: the marker for the way of life we are mourning. And more people visit it than will ever visit other tragedy sites because more people feel a personal, individual sense of loss for what has died.

And no matter how often the politicians insist that terrorism will not change the American way of life, they’re wrong. Something here has changed, and coming to terms with our loss will take a very long time.