I caught my first glimpse of Valencia’s City of Arts and Sciences last year as we drove by on our way to see the old center of the city. It was astonishing: massive, futuristic architecture contrasted sharply with everything we had seen so far. 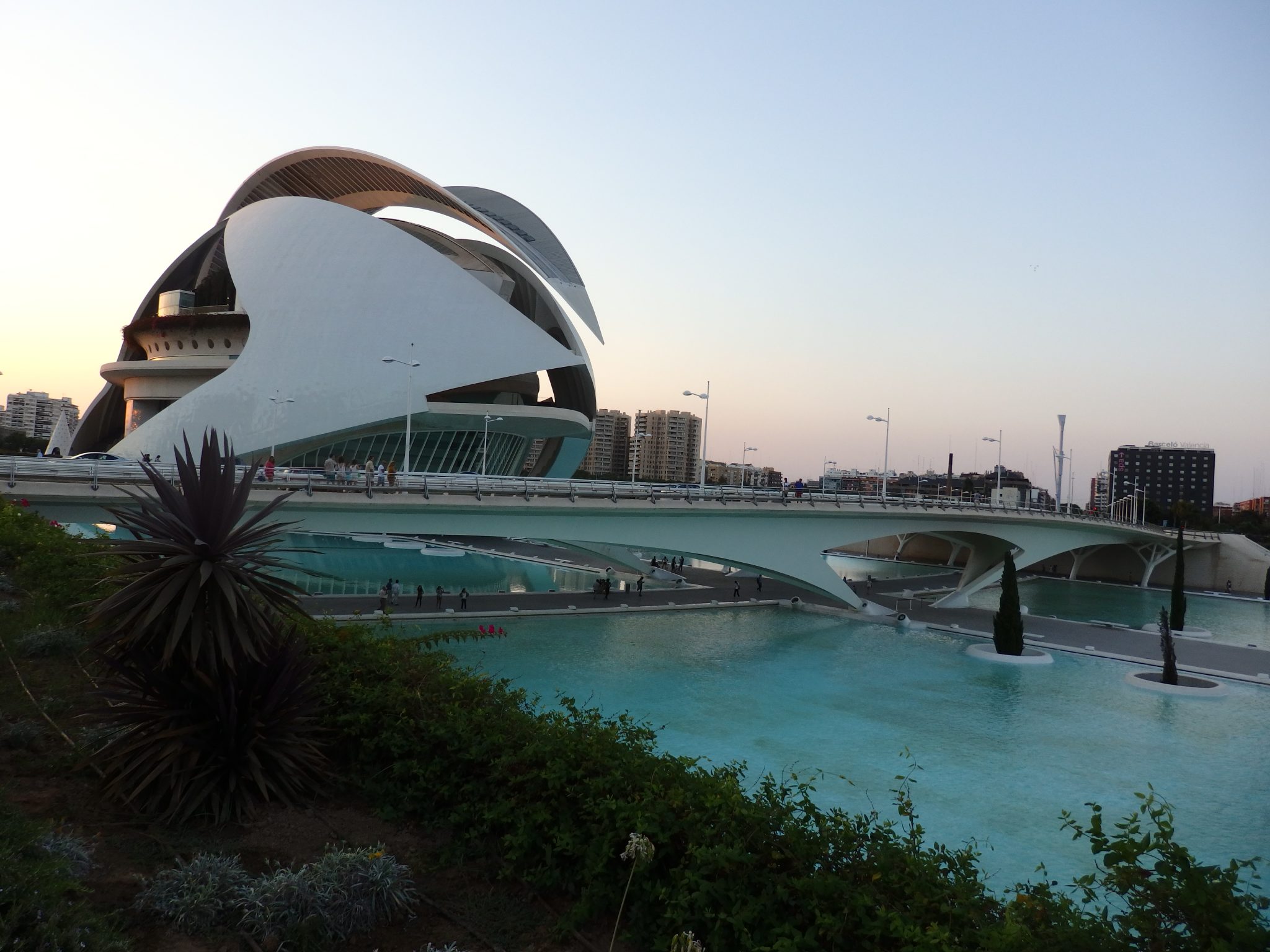 one of the buildings, seen in passing from the car (this year, not last year when I first saw it)

Shining white in the sun, I wouldn’t be surprised if these buildings cause car accidents; the road along what used to be the River Turia is wide and heavily-trafficked, but we couldn’t resist turning and staring as we passed.

We made a mental note to check it out properly next time we were in the area.

The City of Arts and Sciences

The City of Arts and Sciences is a complex of five buildings and the landscape between them, all designed by Santiago Calatrava and Félix Candela. It houses a science museum, a parking garage covered by a landscaped park (called the Umbracle), an aquarium, the Palau de les Arts Reina Sofía (which hosts concerts and other performances), and an IMAX theater.

The buildings extend along about two kilometers of the dry riverbed, perfect for strolling or bicycling and gaping at these complicated but somehow fascinating buildings. One of the buildings—the Palau de les Arts—looks like Darth Vader’s helmet, for example. 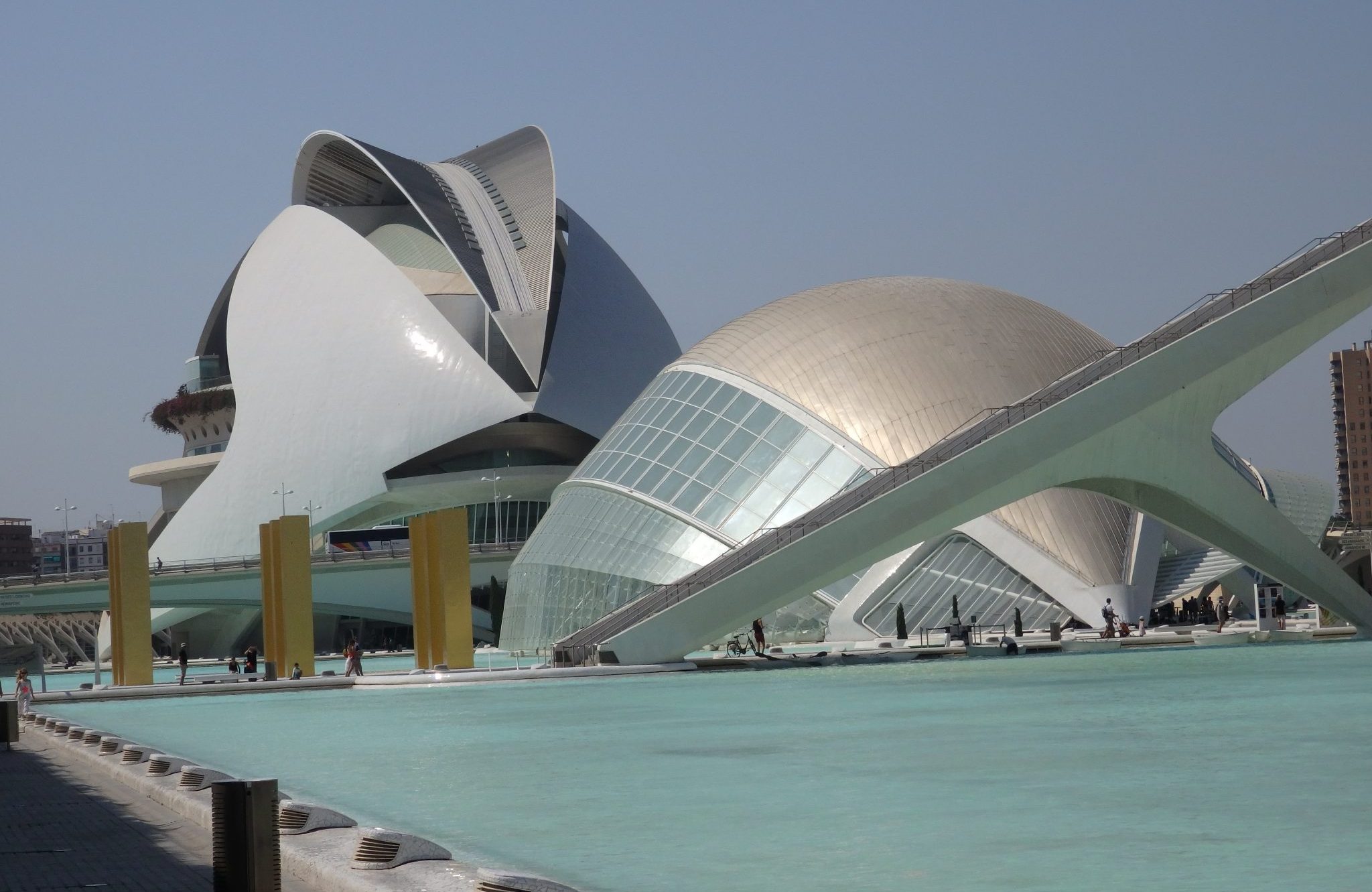 In the background, the Palau de les Arts. In front of that, the IMAX theater.

On the day we visited, the place was mostly empty, which gave it a somewhat abandoned, barren atmosphere. Between some of the buildings are large blue shallow pools. Unfortunately, they’re not for swimming, but you can rent a kayak or rowboat and have a paddle. It seemed to me a lost opportunity that the pools weren’t deeper to allow swimming. That would truly attract the crowds in the heat of summer.

The Museum of Sciences

Since we visited with our three teenagers in tow, we chose to visit two of the buildings: the Museum of Sciences and the Oceanográfico. 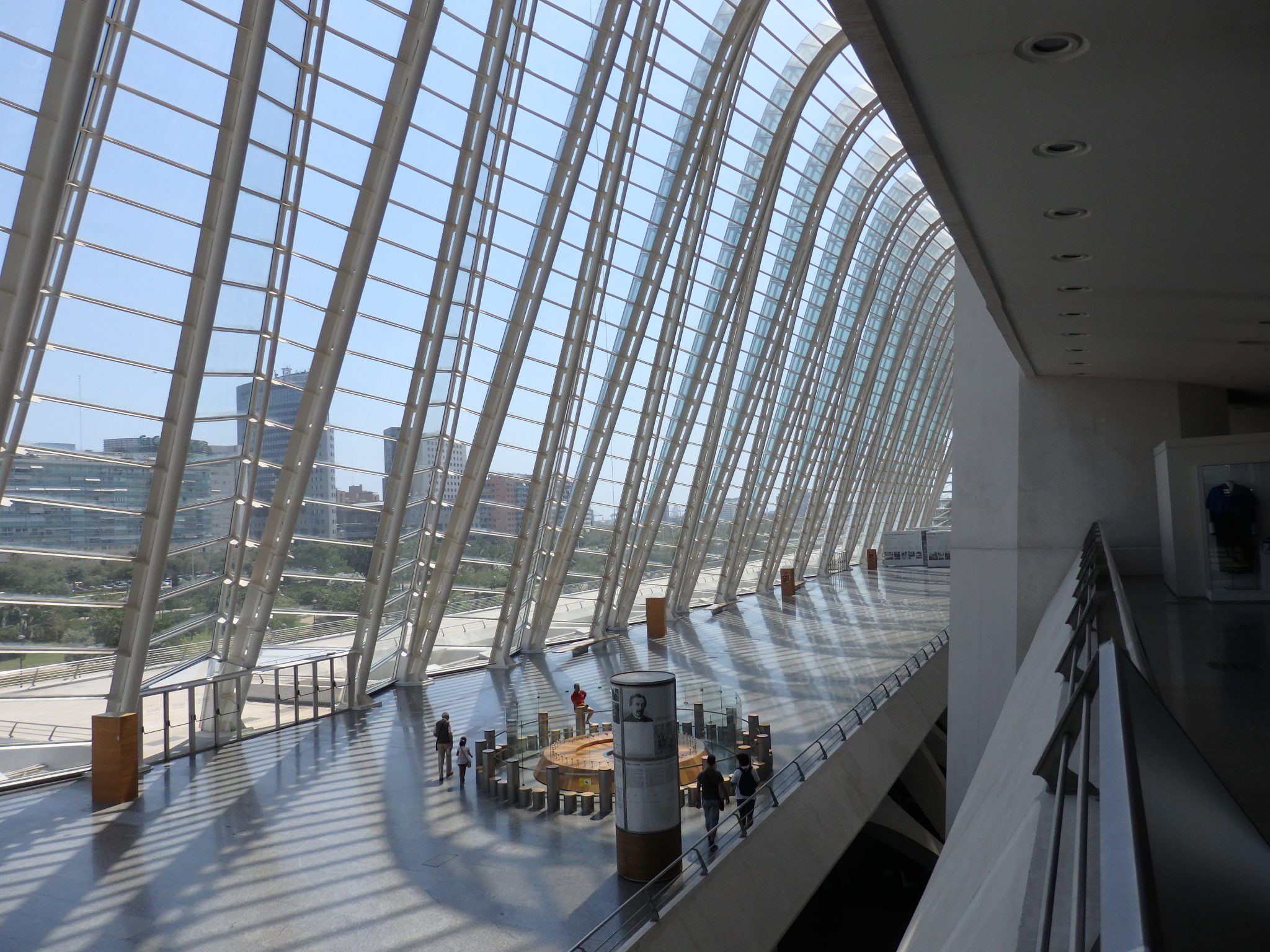 inside the Museum of Science

The Museum of Sciences, housed in a huge, airy space under a soaringly high roof, is very hands-on and child-friendly. Many exhibits invite visitors to try out the concepts that they explain, and here and there are particularly child-centered activity areas, including a sandbox and a playground.

The museum includes all of the exhibits you would expect from a science museum. We liked the top floor best, where we found the dinosaur exhibit, an exhibit about the European space station, and, our favorite, the “Forest of Chromosomes.” This exhibit about genetics offered lots of hands-on ways to learn about our own DNA. 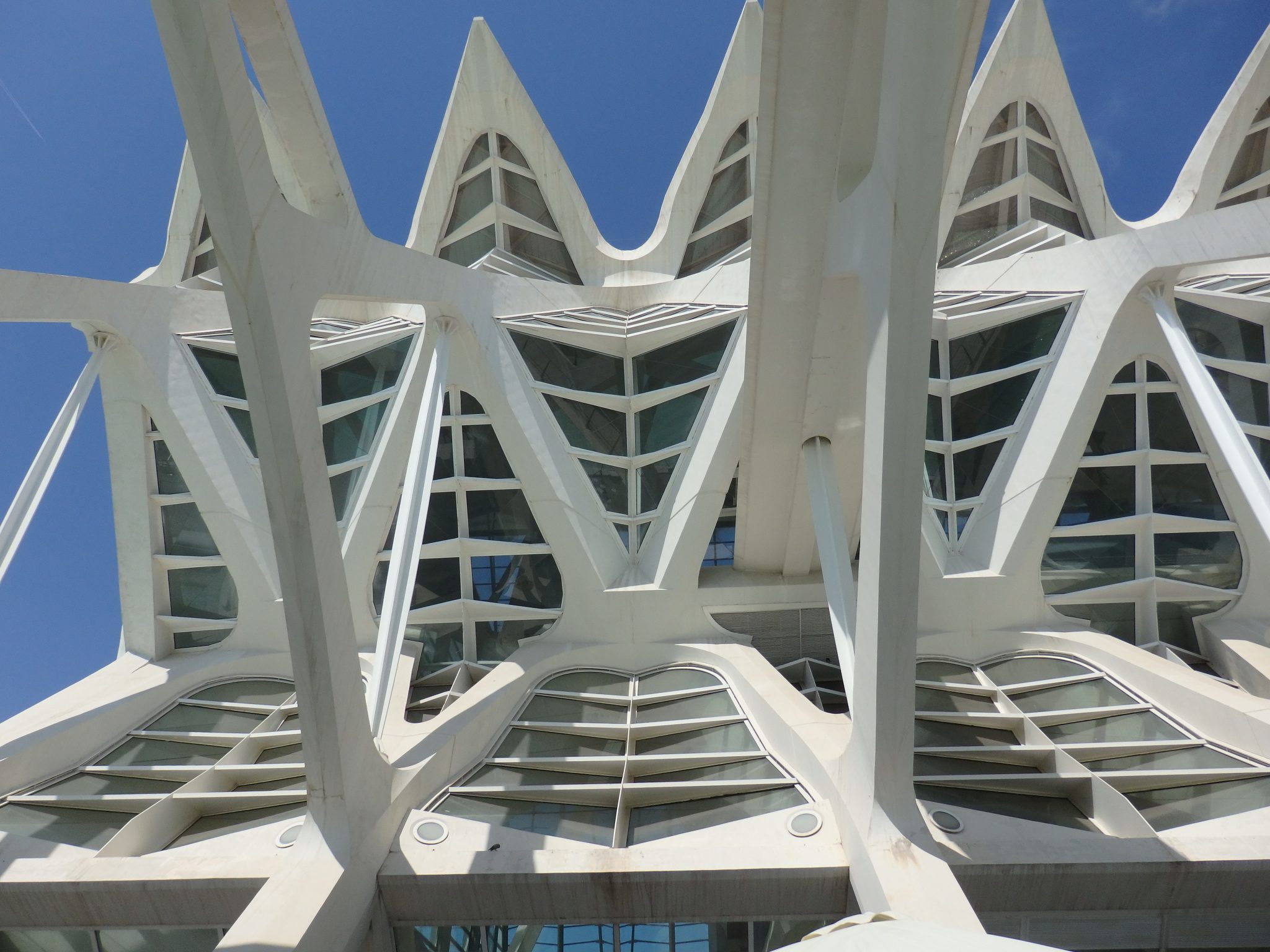 a piece of the exterior of the Museum of Science, looking straight up

When I say “we” liked it, by the way, I’m talking about my husband and our 18-year-old son. This is the same son who hated the Dalí Theatre-Museum. But he’s a science-y kind of guy, and greatly enjoyed the Museum of Sciences.

The other two teenagers cruised through the museum in about a half an hour. Then, bored, they sat down in the place we’d designated for meeting up in an hour and a half and played on their phones while they waited.

Oh, well. You can’t please everyone all the time.

After the Museum of Sciences, we moved on to the aquarium. This claims to be the largest aquarium in Europe. Besides the expected fish, it is home to lots of other creatures including dolphins, whales and penguins. 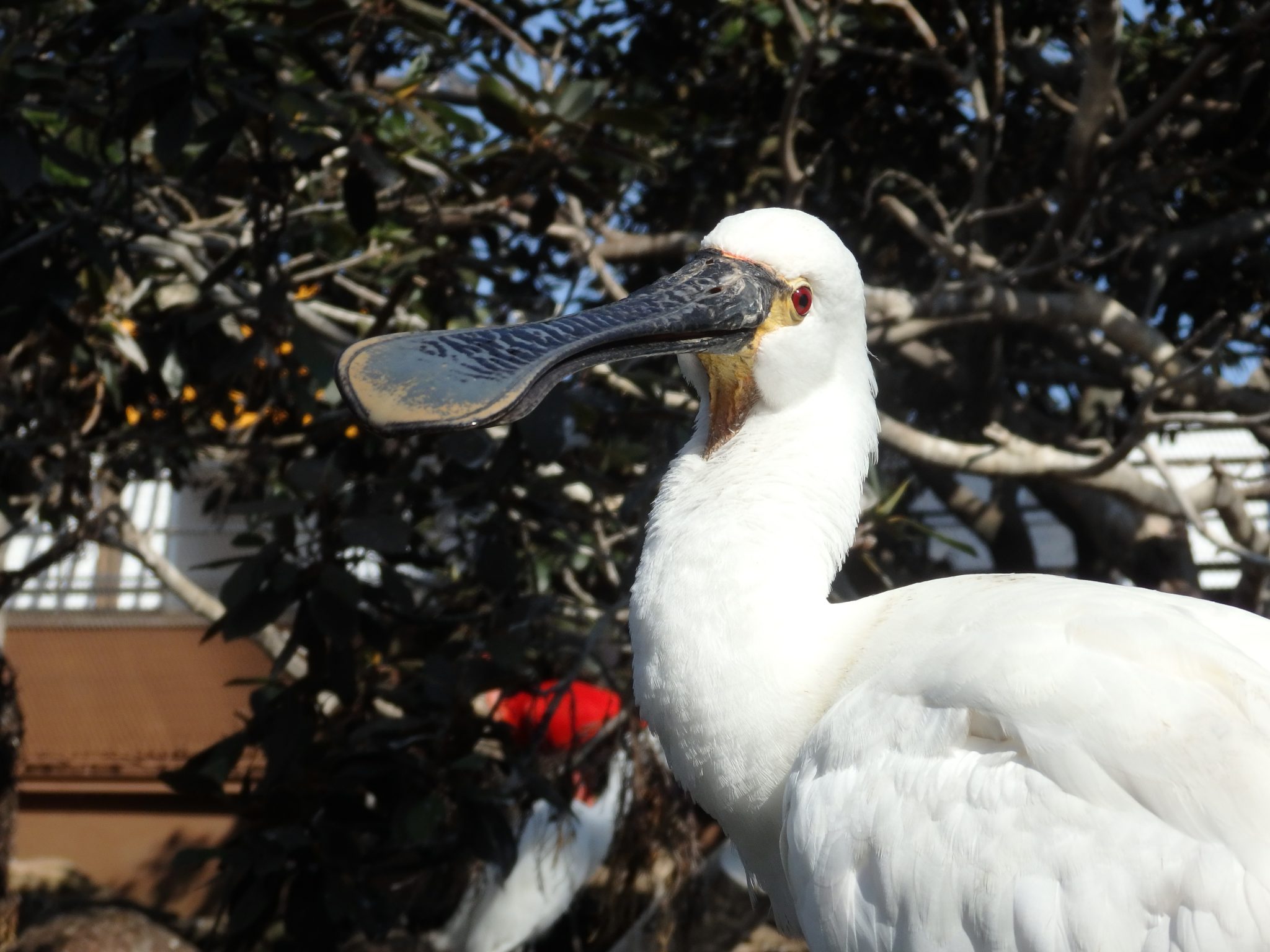 I didn’t have to zoom to get this photo.

We started with Wetlands, which holds wetlands birds in a dome-shaped open-air cage. Walking down into the cage, no walls or glass separated us from the resident water birds. It was a bit disturbing to see how close the birds let us come. They seemed completely tame; altogether too used to being around people. 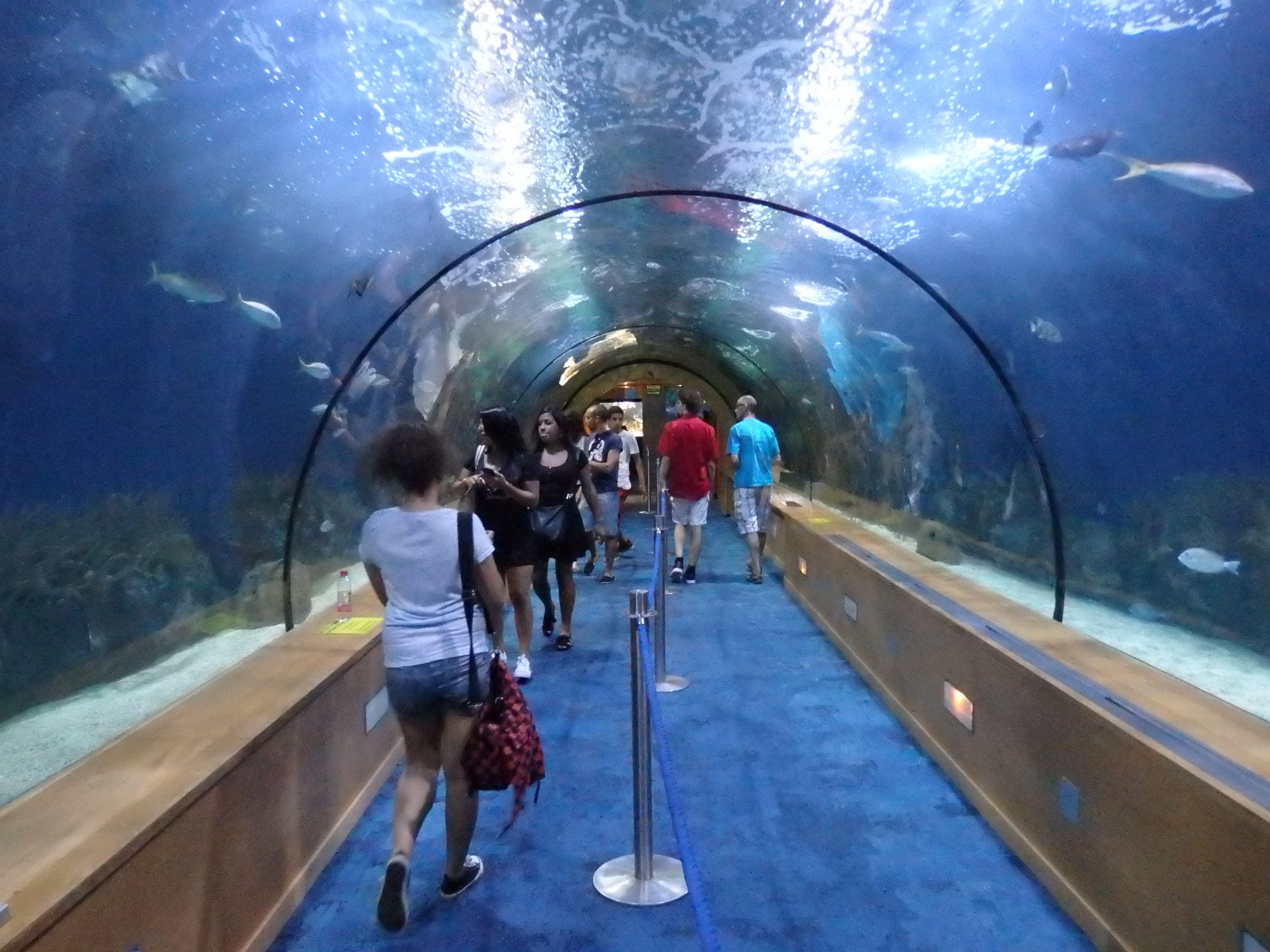 the tunnel in the aquarium

Inside, we most enjoyed a big walk-through tunnel where Atlantic Ocean fish, sharks and other creatures swam on both sides and above us.

We found the Arctic exhibit, on the other hand, upsetting. The beluga whale hovered, almost motionless, in what looked like a much too small tank. 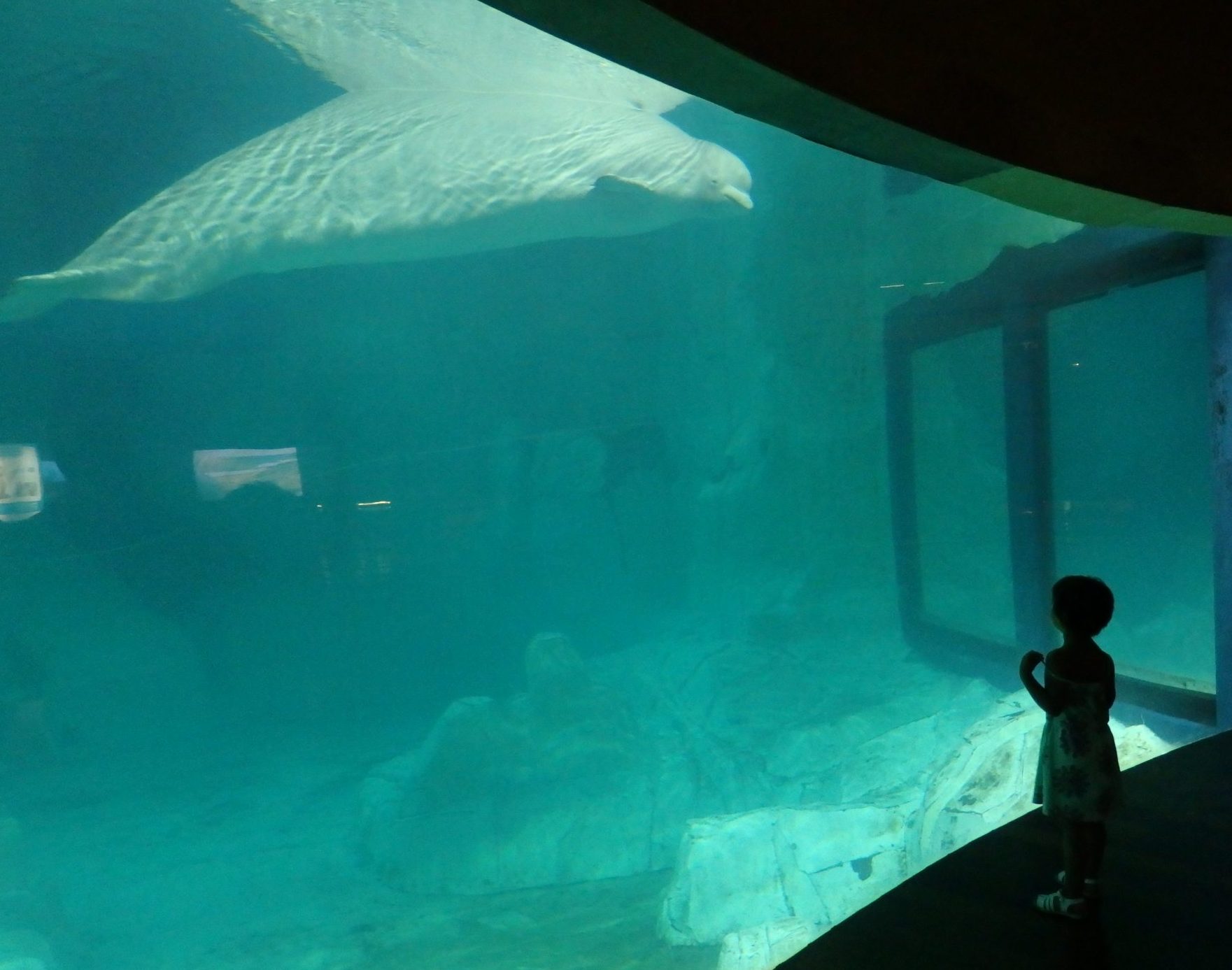 a beluga whale in the Arctic exhibit

The dolphin show went over well with our teenagers, but raises ethical questions of its own, of course. Should dolphins be kept in pools like this, even if the pool is quite big? Could it be harmful to have performers ride them, holding on to their dorsal fins? How humane is the training the dolphins have undergone to learn the tricks involved in the show?

The narration for the show was entirely in Spanish and I could only pick up fragments. It seemed designed to educate, but the show contradicted that message by mostly being about entertainment: flips and synchronized swimming, for example. 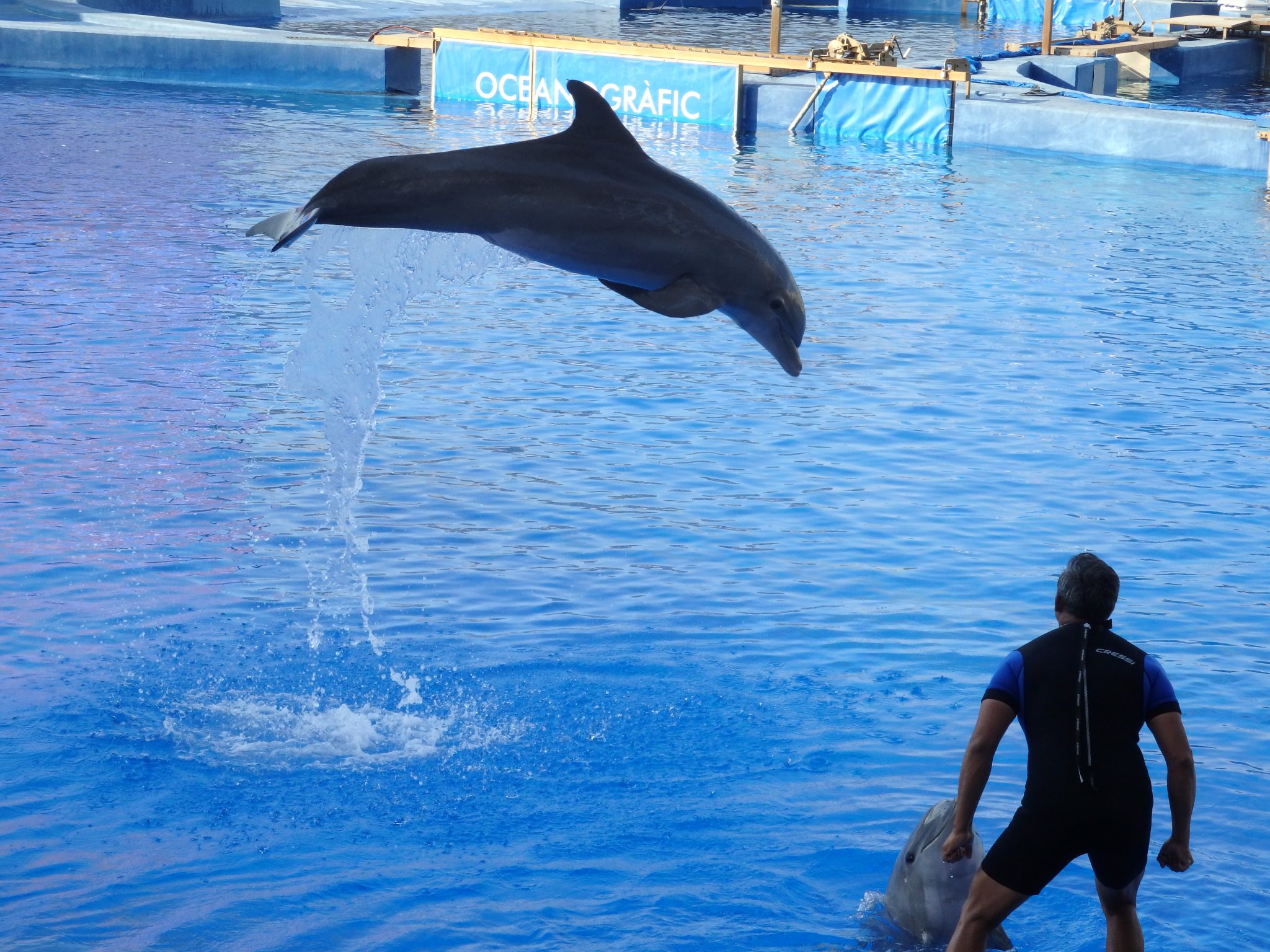 The teenagers all liked the aquarium, though our foster son (14 years old) was really only interested in getting a selfie with a shark. Once we found the sharks and he got his selfie, he’d had enough. Later, the dolphin show, our last stop, caught his interest again.

Other sights in the City of Arts and Sciences

I can’t report on the other parts of the City of Arts and Sciences. I assume an IMAX theater is much like an IMAX theater anywhere else. It cost us about 30 euros per person for a combination ticket to the Museum of Sciences and the aquarium, so we weren’t going to spend more for a show there, or at the Palau de les Arts Reina Sofía either. 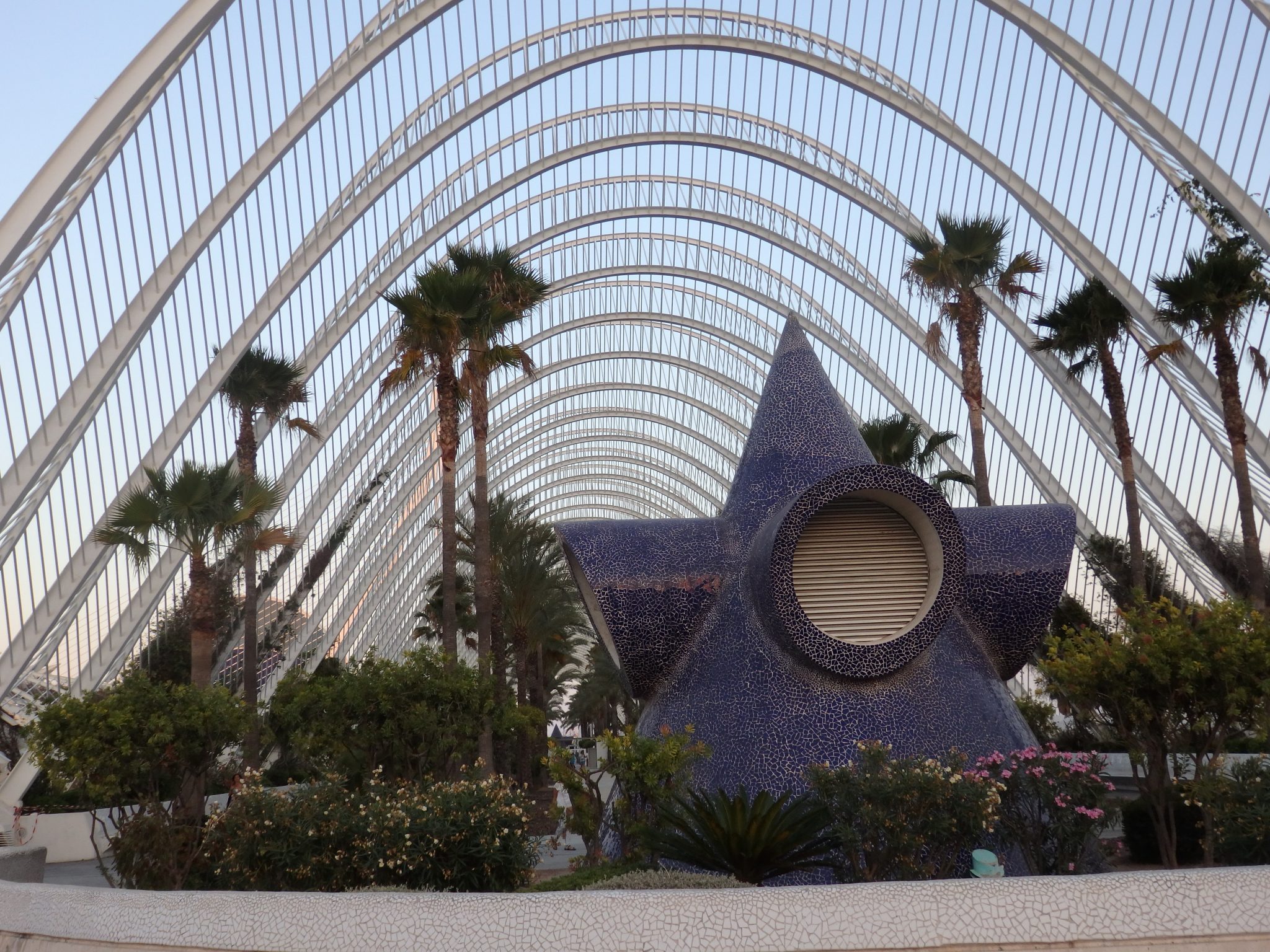 one end of the Umbracle

We walked by the Umbracle on the way to our car, which we had parked under it in the parking garage. It looked pleasant, planted with palm trees. It’s a long, raised, landscaped garden and walkway and includes a sculpture garden. Apparently, you can get good views of the rest of the City of Arts and Sciences from up there. The kids enjoyed my observation that the sides of the Umbracle look like a row of urinals for giants. We didn’t investigate further because by that time the kids had had enough, so we just headed home. 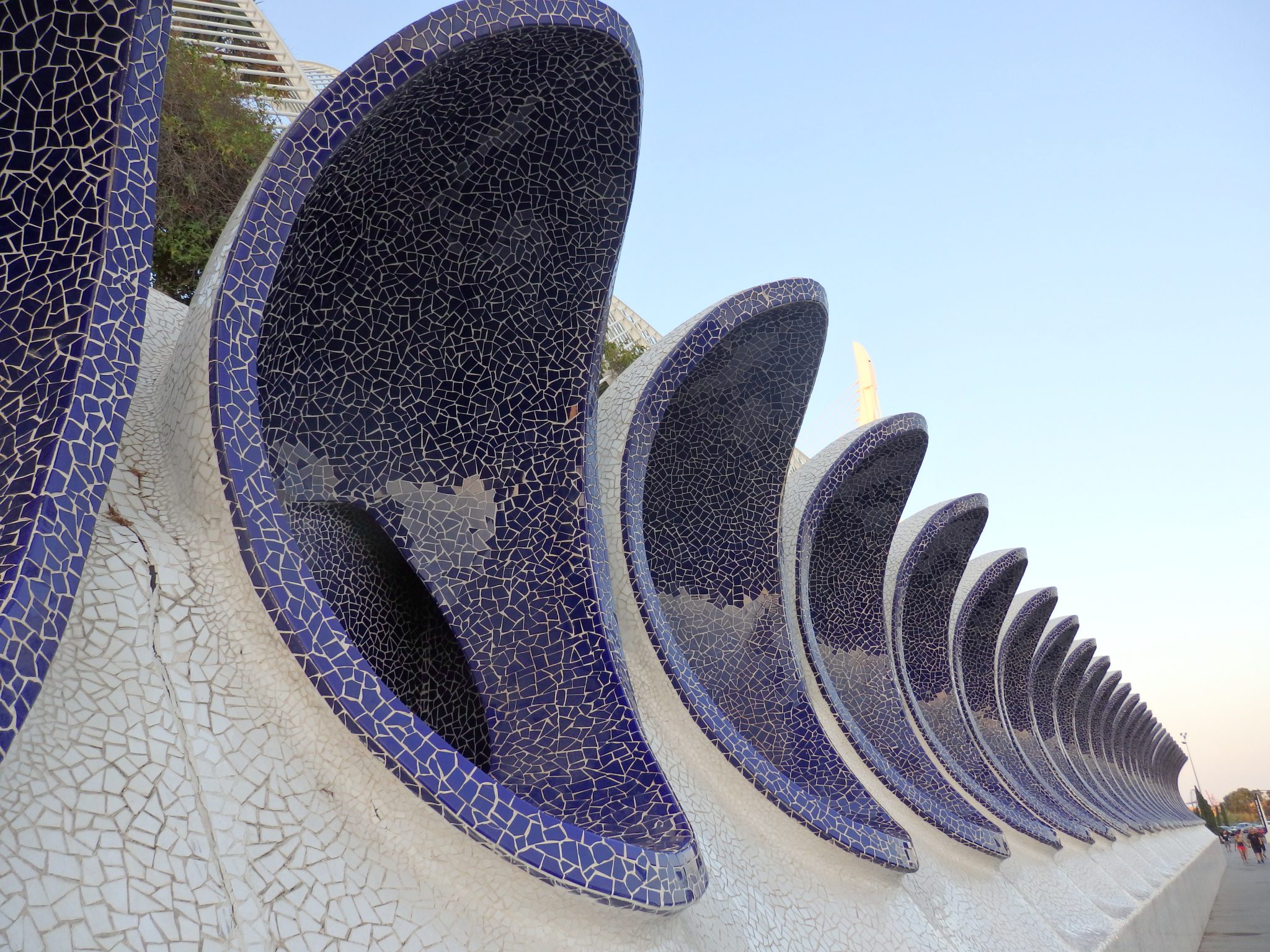 one side of the Umbracle, also known as the urinals for giants

If the prices are out of range for you, admiring the buildings is free and certainly worth doing. As far as I could tell, the Umbracle is also free. All of it, I suspect, would be most pleasant for a stroll in the late afternoon or early morning.

Have you visited the City of Arts and Sciences? What did you think? Add a comment below.