It was a hot Sunday morning in August when I walked from the deserted Plaça d’Espanya into the visitor’s information office in downtown Alcoi, Spain. 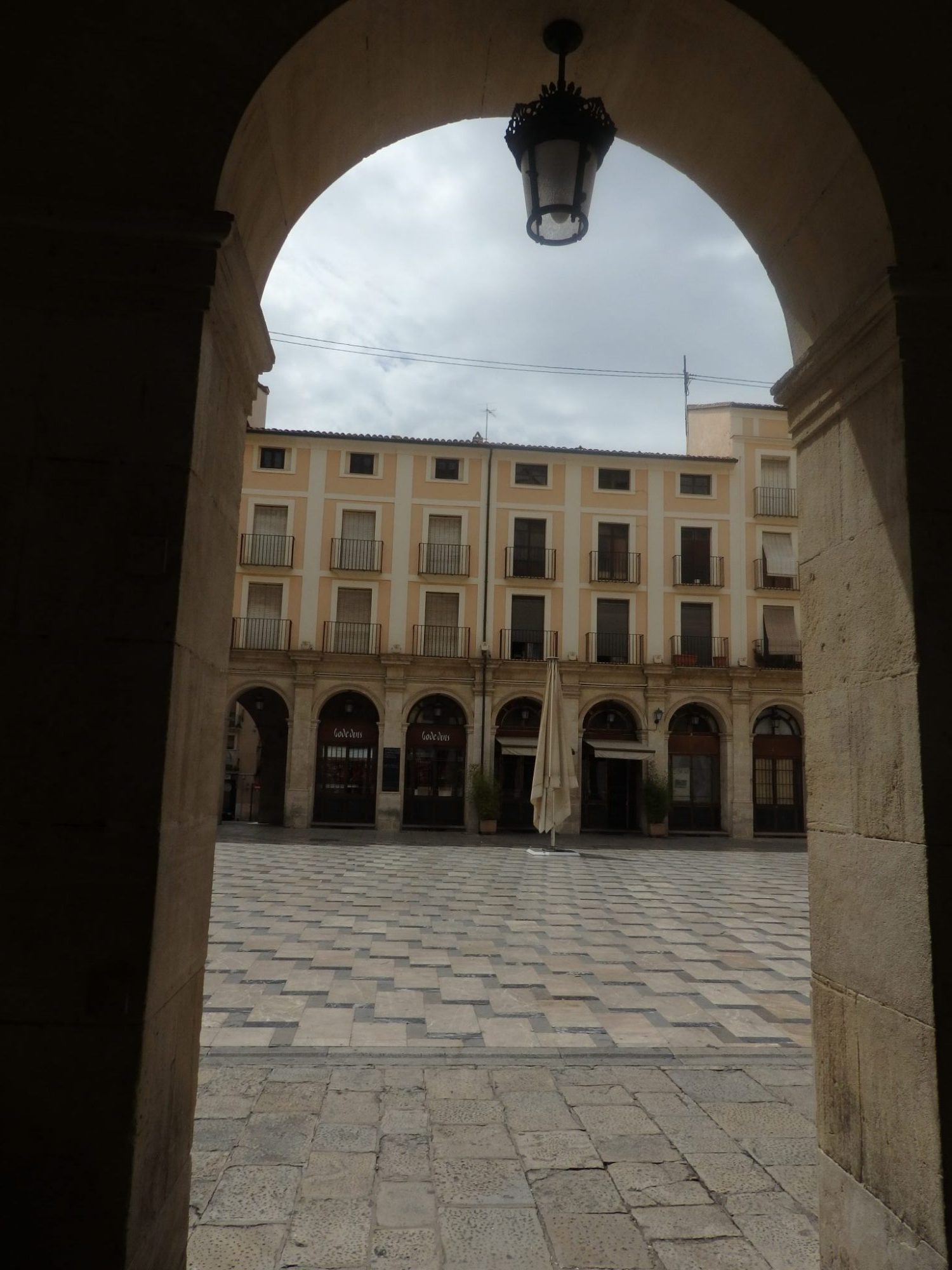 The lone woman at the counter seemed thrilled to have someone to talk to. All I wanted was a map, but she insisted on telling me, in detail, about everything worth seeing in Alcoi. My family waited impatiently outside in the car. I suspect I was the only visitor that day.

Alcoi (spelled as “Alcoy” by Castilians, “Alcoi” by Catalonians) is far off the tourist radar, despite the fact that it’s relatively near to both Alicante (45 minutes’ drive) and Valencia (an hour and a quarter).

Yet Alcoi has a lot going for it. In particular, some dramatic scenery, modernist architecture, and an interesting industrial history. It also has a number of museums and some remnants of its medieval past.

The business center of Alcoi is perched on a high point of land where two rivers meet. The modernist bridge, Viaduct of Canalejas, is a great place to go to get a sense of this dramatic location. You can see the newer buildings above and the relics of Alcoi’s industrial past below in the canyon. Since these rivers used to flow all year, the city became an industrial center starting back in the 1500s. 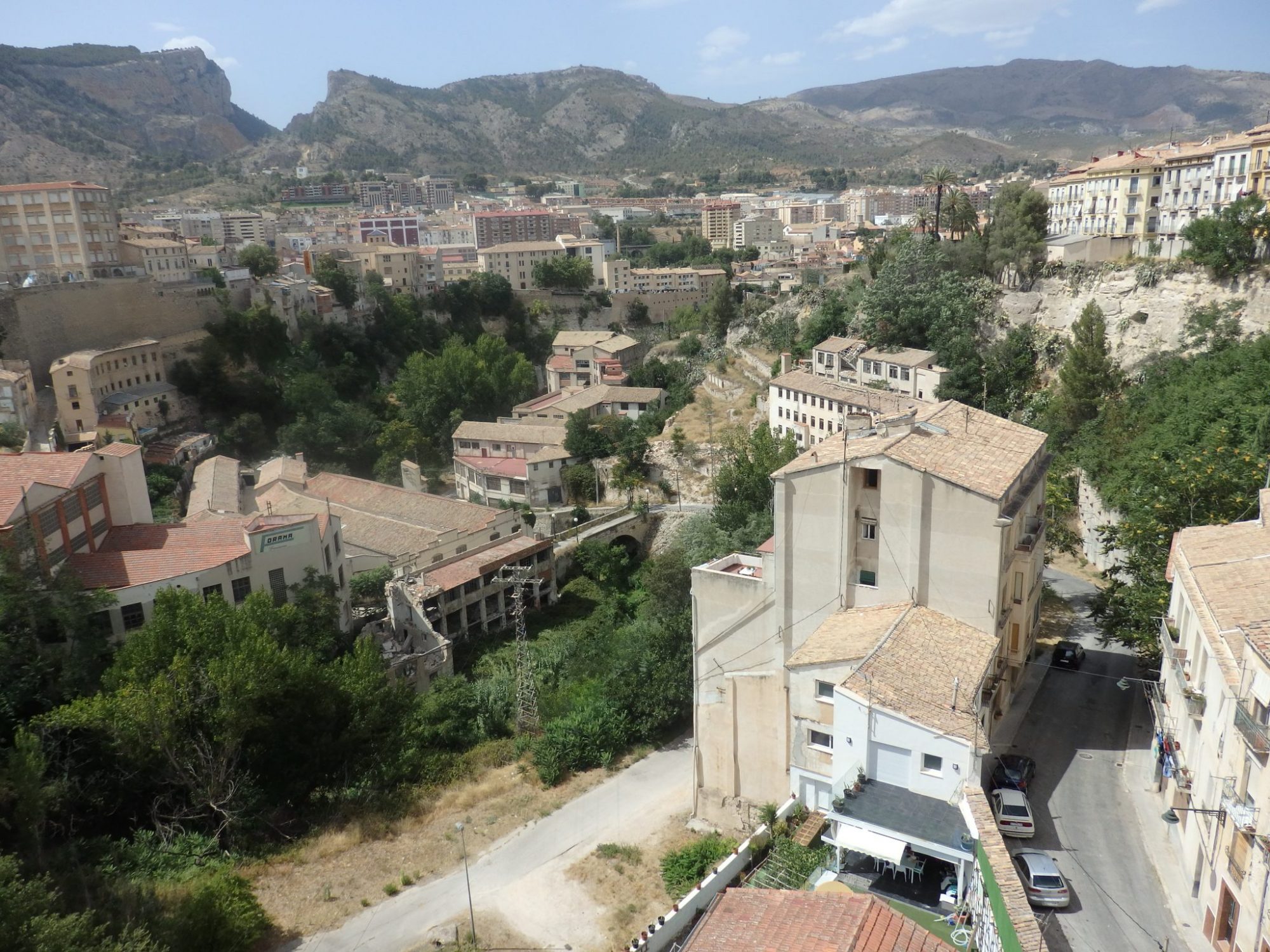 From the Viaducto de Canalejas you can see down into the river valley, including some of the old industrial buildings.

Its industry is what made Alcoi a target in the Spanish Civil War. Alcoi’s residents had to hide in bomb shelters while fascist forces attacked the city to take out the Spanish government’s industrial capacity. One of the shelters, the Refugio Cervantes, is now a museum documenting the bombings.

Alcoi’s industrial prosperity is why the city has so much modernist architecture. The tourism office suggests two walking routes through the city: one highlighting Alcoi’s industrial history and one focusing on modernism. Since it was a Sunday and pretty much everything was closed, including historical buildings and museums, we decided to see the highlights of modernism. 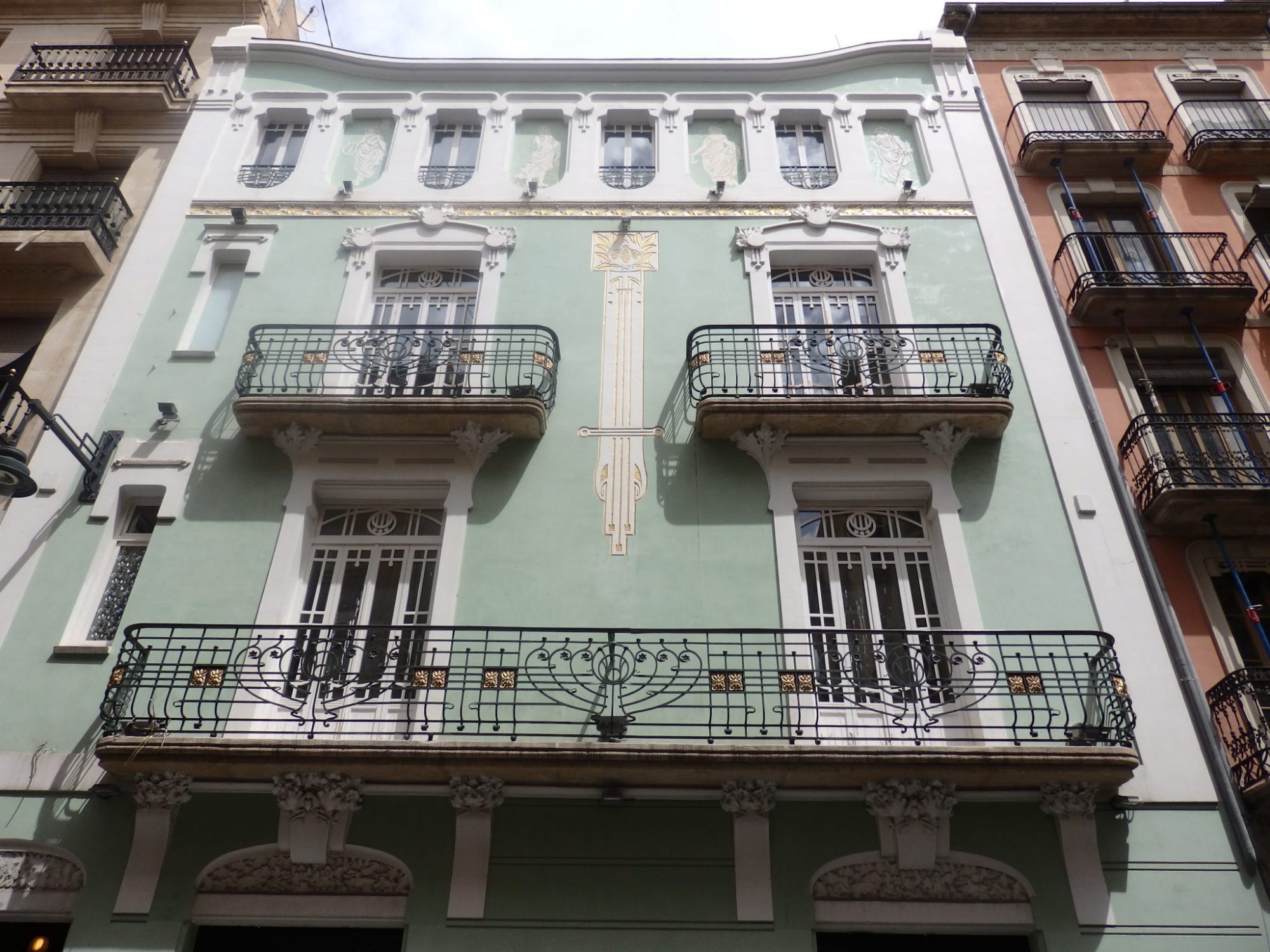 Many of Alcoi’s notable buildings date from between 1904 and 1915. I’m no expert on architecture, but I certainly recognized Art Nouveau elements in the designs. According to Wikipedia, the font of all knowledge, Modernism in Catalonia developed at the same time as Art Nouveau and Jugendstil elsewhere in Europe. 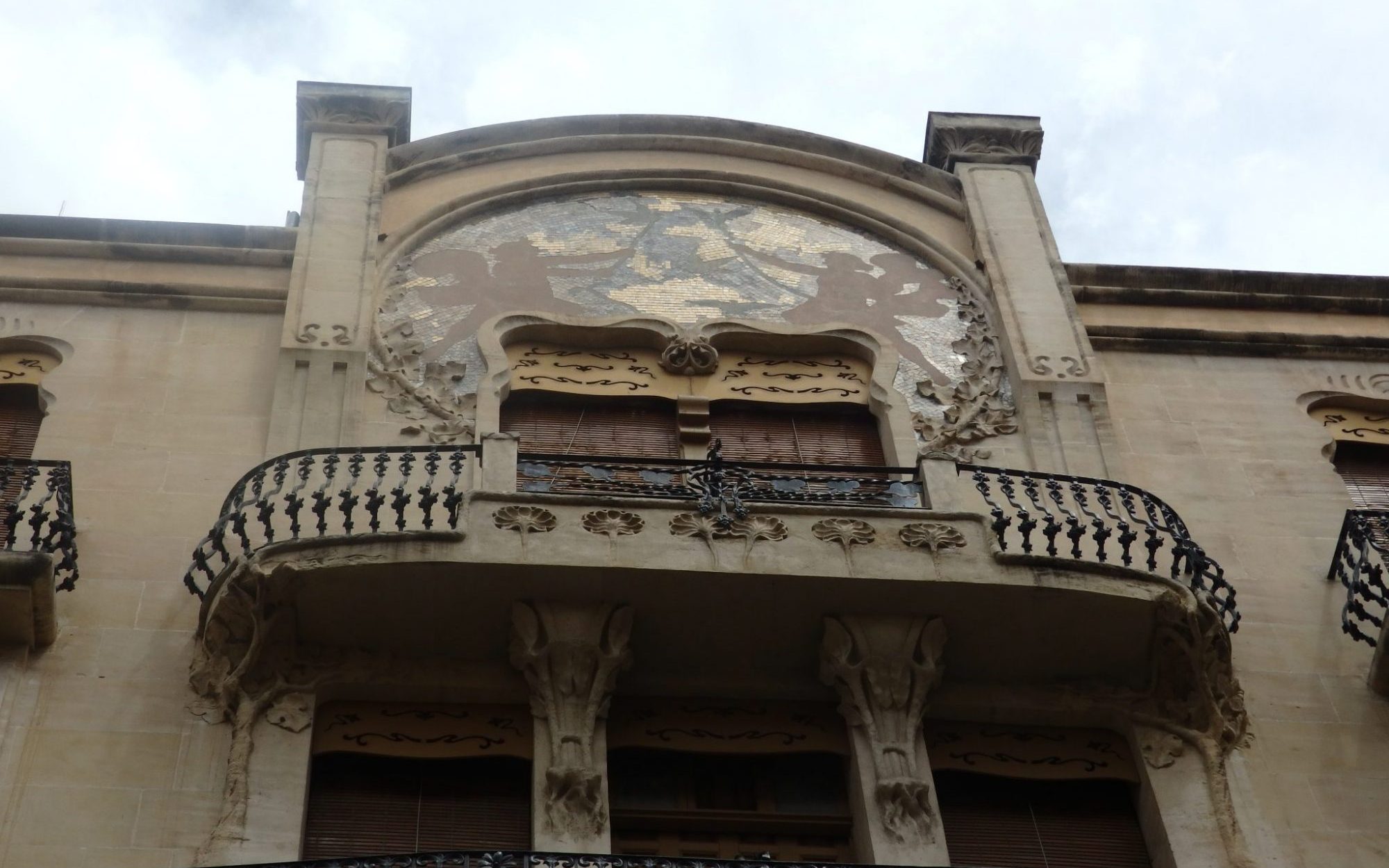 You can see a similarity to Art Nouveau and Jugendstil in the artwork on the façade of this building: Casa del Pavo, designed by Vicente Pascual in 1908.

I enjoyed following the map that the lonely tourism worker gave me to see some of the highlights. So did my husband, and, for a while, my foster daughter, who enjoys art and architecture in small doses. 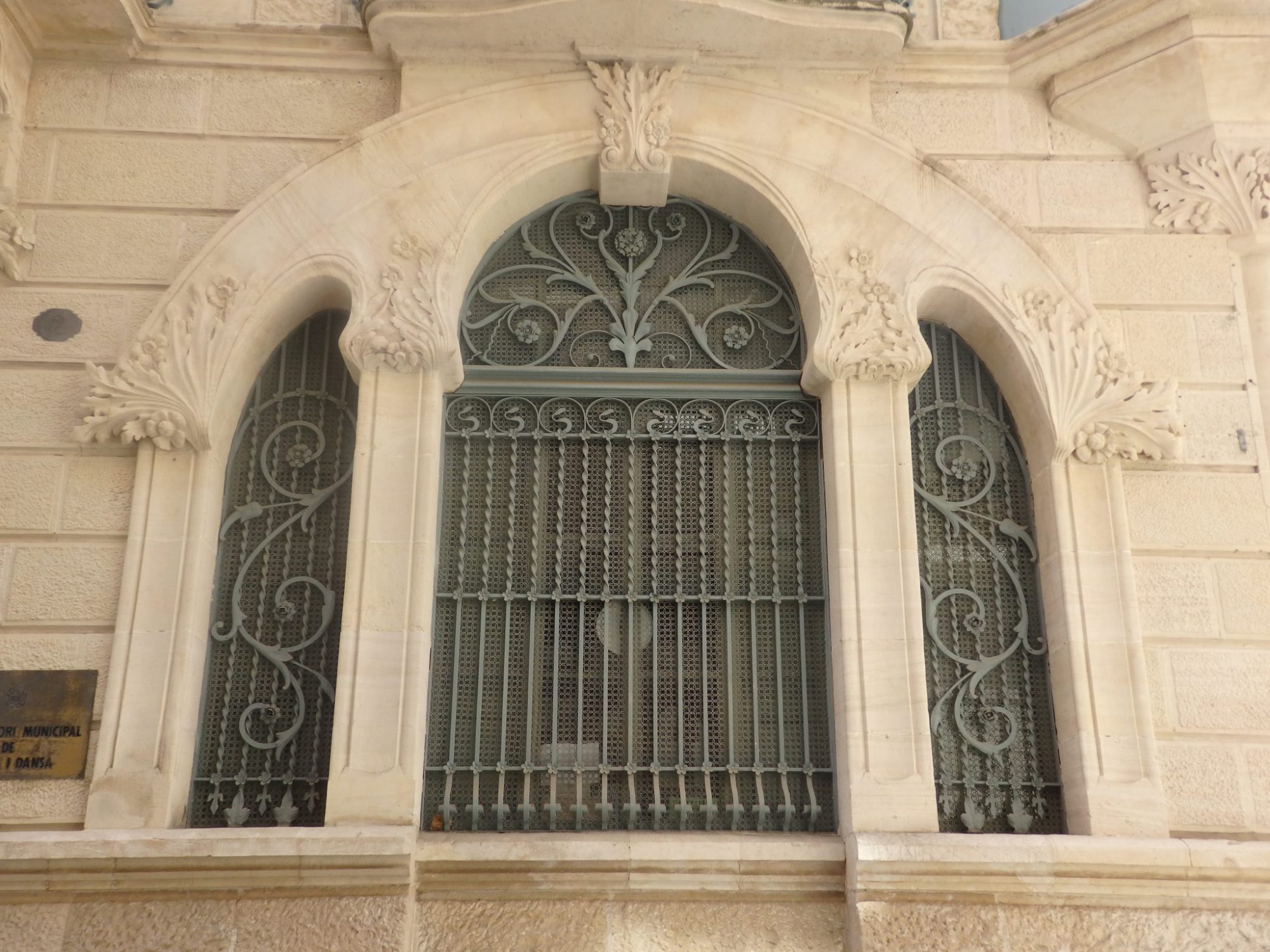 It’s worth slowing down and noticing the detail of the windows and doors. This window is from the Casa de Escalo, 1906.

The boys (18 and 14), on the other hand, trailed along reluctantly, complaining of heat and thirst. They were right: it was hot in August, and we needed frequent breaks to drink, but very few businesses were open.

For that reason, we spent only a short time in the city, and didn’t see as many of the buildings as I would have liked. The tourist map has 28 modernist points of interest listed, most of them apartment buildings. You could certainly visit them all if you had more time, since they’re all in the center of the city. If you had a whole day, you could fit in some of the industrial and medieval sights too. 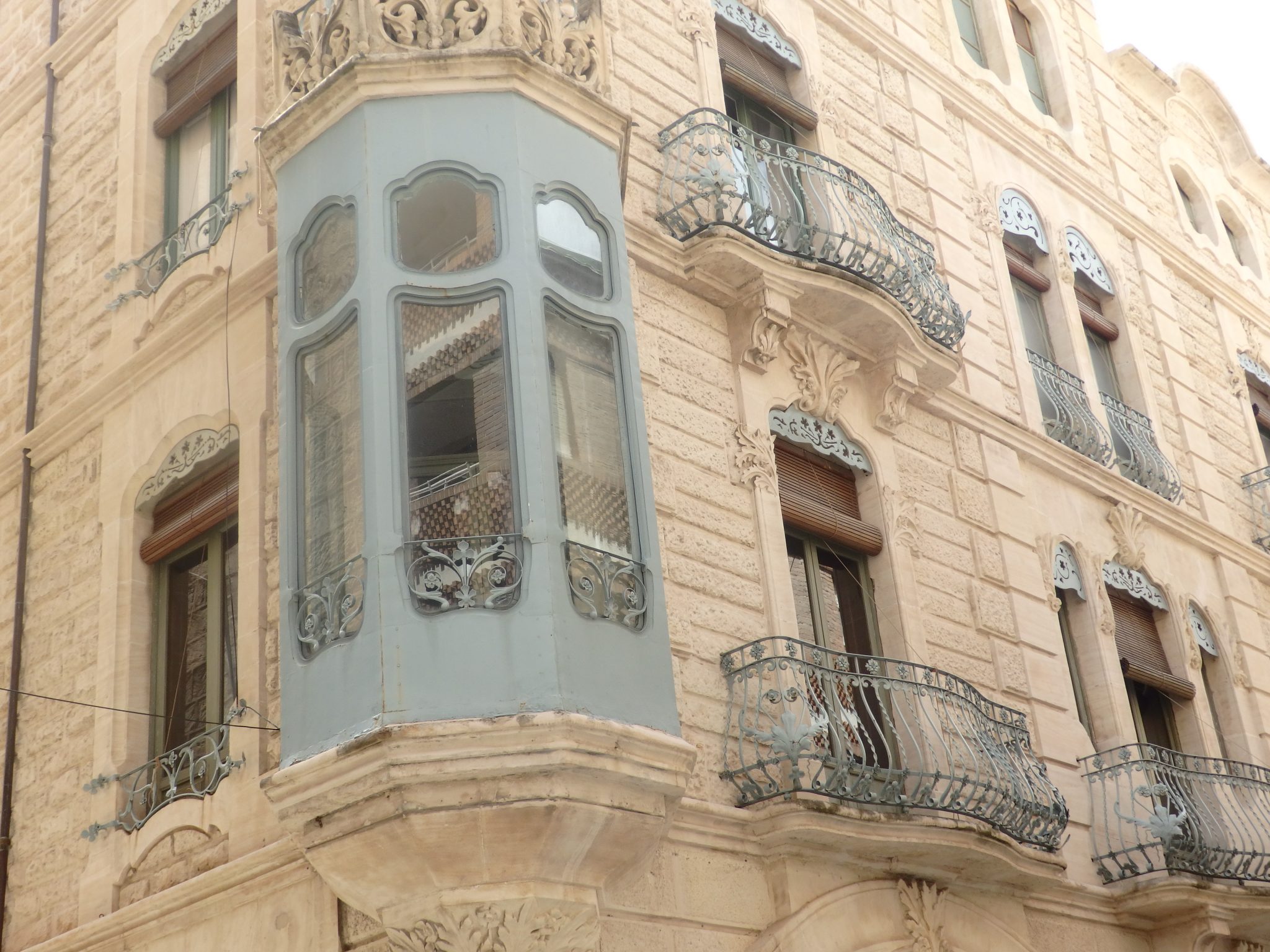 I loved this attractive corner bay window on the conservatory of music. Casa de Escalo was designed by Vicente Pascual Pastor in 1906.

A word of warning: if you decide to go to Alcoi by car, drive carefully, especially on the secondary roads. They twist and turn and take real concentration. Read my post about driving in the Costa Blanca here.

Have you been to Alcoi? Do you have any recommendations? Add a comment below!