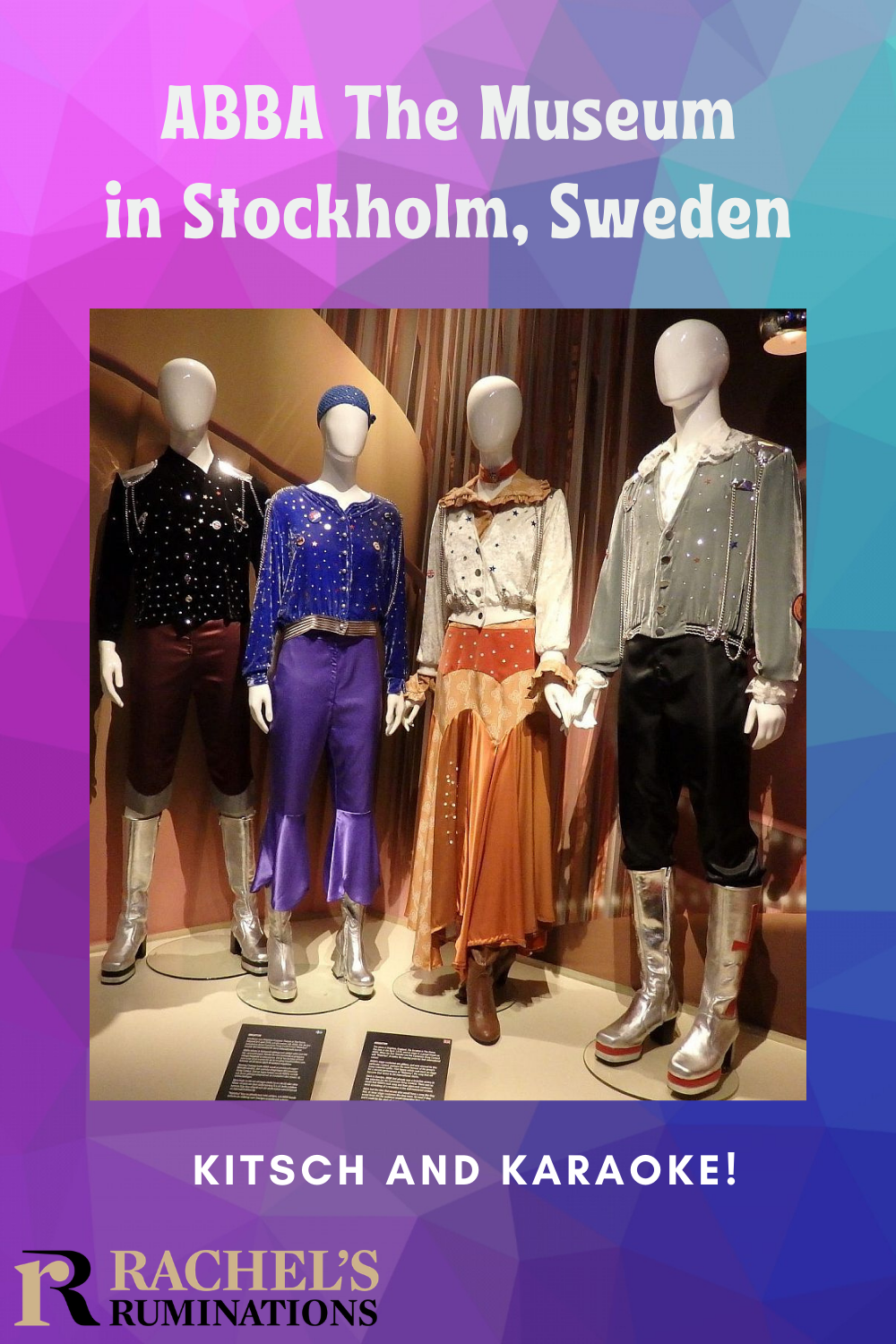 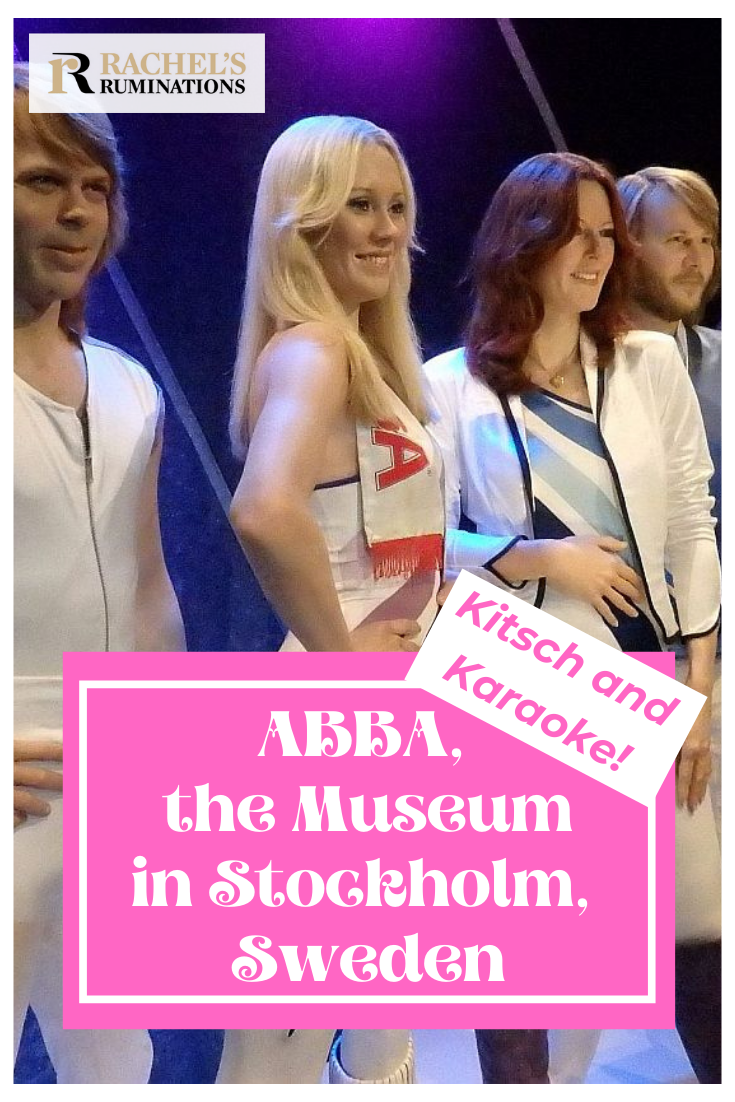 Okay, maybe you don’t like ABBA, but you catch yourself singing along when you hear an ABBA song on the radio.

Disclosure: I received free admission to the ABBA museum as part of a TBEX conference in Stockholm. All opinions, however, are my own.

A second disclosure: This article contains affiliate links. That means that if you click on the link and make a purchase, I wil receive a small commission. This will not affect your price.

Love them or hate them, unless you’re truly allergic to the sound of their music, you’ll enjoy ABBA The Museum in Stockholm, Sweden.

(If you do love them, here’s their official fan site.)

To some extent, how much you enjoy the ABBA Museum in Stockholm depends not on how much you like ABBA, but on how much you’re willing to make a spectacle of yourself. If you tend to be self-conscious, it might be wise to have a glass or two of wine in the bar upstairs before venturing into the museum.

In other words, it’s a highly interactive museum. It begins with some displays about the six Swedish bands that have won the Eurovision contest, then moves on to the star attraction: ABBA.

ABBA is an acronym for the four performers who made up the band: Agnetha Fältskog, Björn Ulvaeus, Benny Andersson, and Anni-Frid Lyngstad. One of the most successful pop groups in history, the group took off when they won the Eurovision song contest in 1974 with the song Waterloo.

ABBA’s history and career are chronicled in great detail through a combination of video, images and objects. You can see the outfits they wore for their winning Eurovision performance, as well as the instruments they played.

(Was that the style in those days or were they particularly kitschy?) Videos show early pre-Eurovision and later post-Eurovision recordings. Instruments, gold records, ABBA merchandise: it’s all here.

What makes ABBA The Museum interactive is that visitors can face challenges, like a quiz about ABBA’s history (which I failed). Or you can master a song and compare it to the recorded song. (I didn’t do so well there either.)

And here’s where it gets really embarrassing. In a “sound booth” (that other visitors can hear), you can “audition” to be the fifth member of the band, singing along to one of their songs. (I sang Mamma Mia with two other bloggers. I hate to think how I must have sounded, given that I can’t sing.)

You might also enjoy these other posts from Stockholm: Skansen Open-Air Museum, The Nordic Museum, or The Vasa Museum.

You can dance and sing along with projections of the band, with other visitors as your live audience. You can appear in a music video with members of the band. (Now, that was awkward!)

You can also save any and all of these interactive elements for later viewing. (No, I haven’t saved any of them. It would be just too embarrassing for words to let anyone see them!)

One smallish, circular room looks like a 70s disco, with a disco ball and colored lights. Video screens show ABBA performances, and visitors can dance likes it’s the 70s. Most of them when I was there, though, just stood around and chatted or took pictures.

The Swedish Music Hall of Fame

After the ABBA section of the museum, it seemed a bit of a letdown to visit the Swedish music hall of fame and see the exhibits on the history of Swedish popular music.

Yet many of my fellow bloggers spent a lot of time there. With a separate alcove for each decade of Swedish popular music, hundreds of musicians are represented. Visitors can push a button to select each musician or group and hear one of their songs and/or watch them in a video. Perhaps because I’m not particularly musical, this part didn’t interest me, but if you are curious to hear some musicians that are new to you, you could easily spend hours in this section.

The history section also has a separate room that looks like a studio, and when I visited, some people were making music there. It wasn’t clear to me what the story was. Were they just visitors and anyone can go in there, pick up a guitar and start playing? Or do they hire musicians to hang out there for the benefit of the tourists? No idea.

Should you visit ABBA the Museum?

Should you go to the ABBA museum? If you are a fan, definitely. You’ll love this.

If you’re not a fan, it depends. Don’t go if you hate ABBA—people seem to have particularly strong feelings about this band, much like they do about, say, Barry Manilow or Justin Bieber.

If you’re sitting on the fence on this one, then go. If nothing else, you’ll get a kick out of the karaoke and dancing, whether you do them yourself or you watch someone else make a fool of themselves, all in good fun.

In any case, go with a friend, or a group of friends. This is most definitely not a museum to be taken too seriously.

So what do you think? Would you go?