The leaflet advertising the Wick Heritage Museum compares the museum to the TARDIS. If you’re a Doctor Who fan, you’ll know exactly what that means: Doctor Who’s form of transportation, a blue police box (Time And Relative Dimension In Space), is bigger on the inside than the outside.

(Disclosure: This article contains affiliate links. If you make a purchase through one of them, I will receive a commission. Your price will not be affected.) 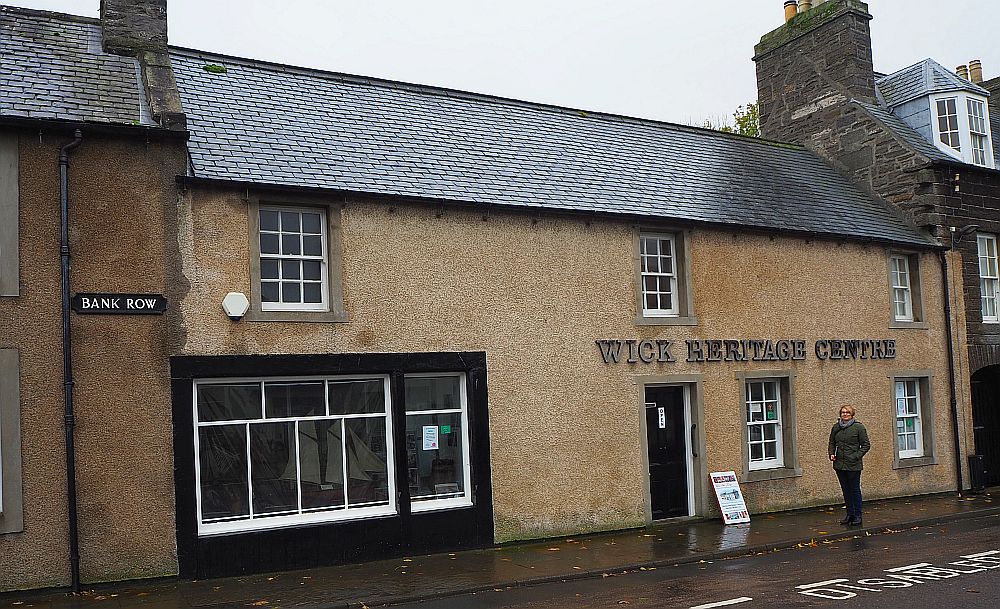 The unassuming entrance to the Wick Heritage Museum.

Pulteneytown, where the Wick Heritage Museum has its home, was founded in 1808 just across the river from the small town of Wick, on the east coast of the northern Scottish Highlands. At that point in time, Wick’s harbor had just been modernized in order to allow Wick’s fishing industry to expand. Pulteneytown’s purpose was to house workers for the growing herring trade.

At the same time, landowners of noble families were “clearing” their land of crofters (small farmers) to make room for large-scale sheep farming. In their view, they were providing better opportunities for the displaced workers by moving them to Pulteneytown.

The herring industry boomed. Wick’s harbor was home port to more than 1000 fishing boats by the end of the century. In the town itself, industrial-scale processing took place: workers gutted the fish expertly, packed it and cured it in barrels, then loaded the barrels onto ships to send off to Europe. What with fish processing and all the support industries like barrel-making and shipbuilding, it was a bustling little town. Eventually, though, the herring stocks declined, and by the 1930s the industry had moved on.

The Wick Heritage Museum, then, illustrates this history, and particularly gives some idea of how people in Pulteneytown lived and worked. The originally separate houses have been merged, so it’s sometimes hard to see where one ends and the next begins, but individual rooms are furnished to give a sense of 19th century life.

They’re a bit over-furnished, actually. Some rooms overflow with so much stuff – porcelain objects, embroidery samplers, cribs, clothing, toys, tools, you name it! – that there’s no way they represent how they actually might have looked when they were lived in. After all, people do normally leave themselves space to walk! 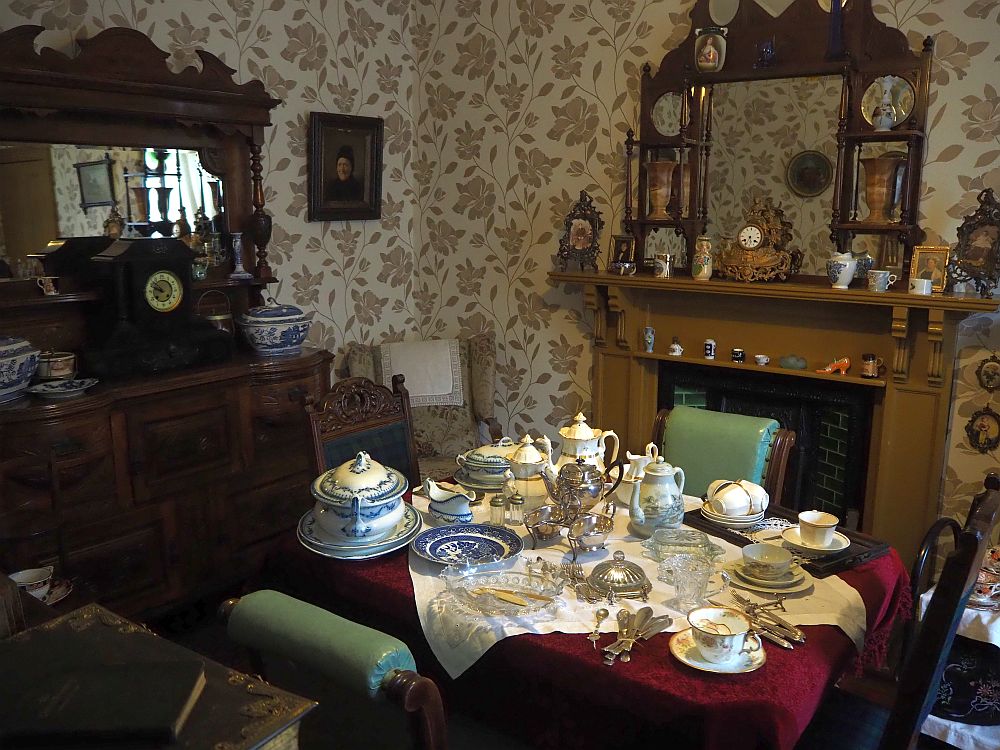 A dining room in Wick Heritage Museum. Notice the sheer quantity of dishes and other objects on the tabel and mantel.

This isn’t just about their homes, though. The museum also includes plenty of exhibits and information about shipping itself and fishing and curing herring. One space, for example, must have once been a yard, or a space between houses, and the museum has managed to fit two fishing boats into it, complete with masts and sails. 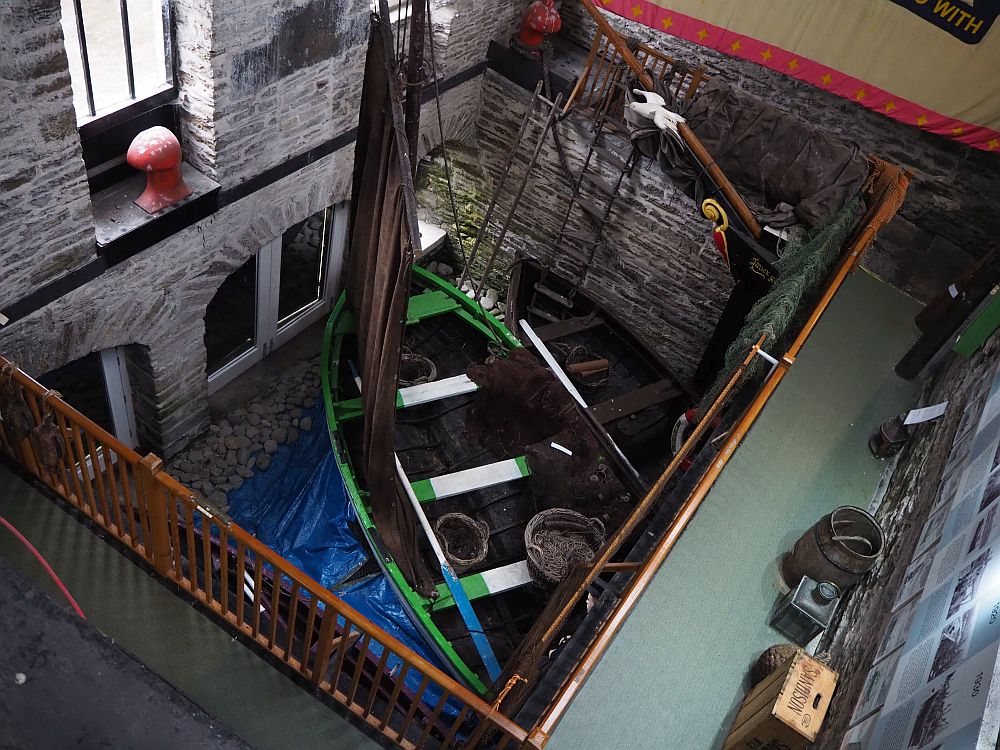 A view down at the fishing boats inside the Wick Heritage Museum.

An entire lighthouse light dominates another space, placed here when the lighthouse it lived in was replaced by an automatic beacon. In a space between two houses (I think), an apparatus demonstrates how fish were smoked, including fake fish hanging on the racks.

In other words, it seems to me that this is one of those museums where local families and businesses have gotten rid of lots of their old stuff by donating it. I’ve visited museums like this before: they become repositories of all sorts of odds and ends and collections and junk from the community. 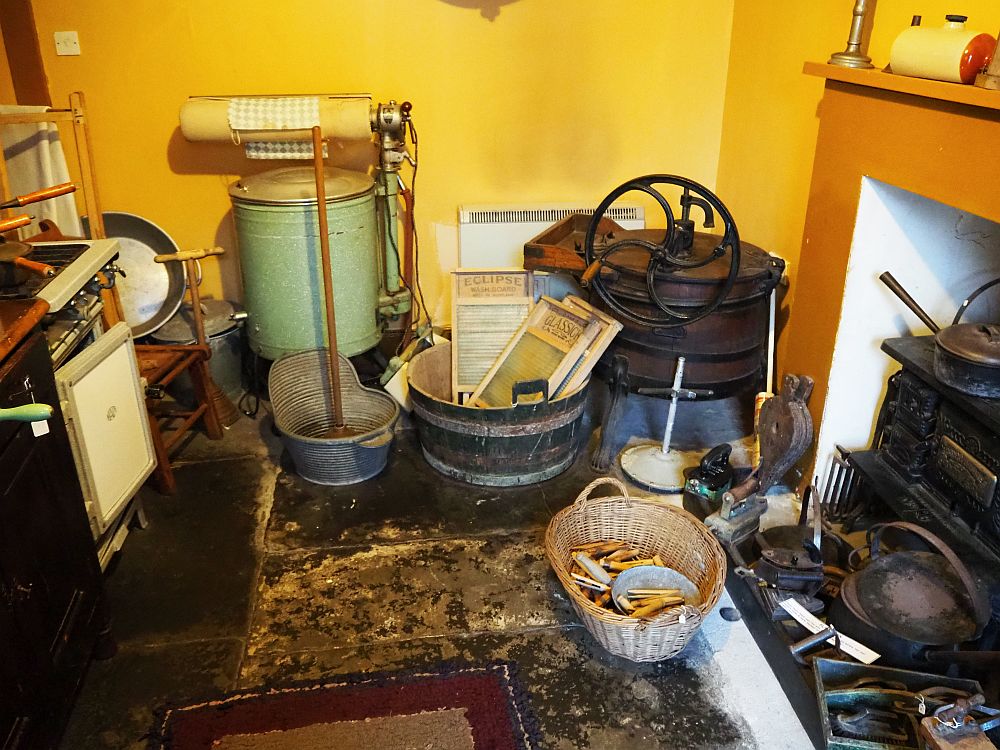 Lots of tools and machines for doing laundry and other kitchen tasks. I don’t think any real kitchen would have had all of these objects at the same time!

This one, though, has done a better job than most. The items are displayed in a logical way: the things related to the fishing industry are grouped together, for example. The old printing press and boxes of type are displayed in a workshop space, as is the mechanic’s shop; one room recreates a school; another a cooper’s workshop. 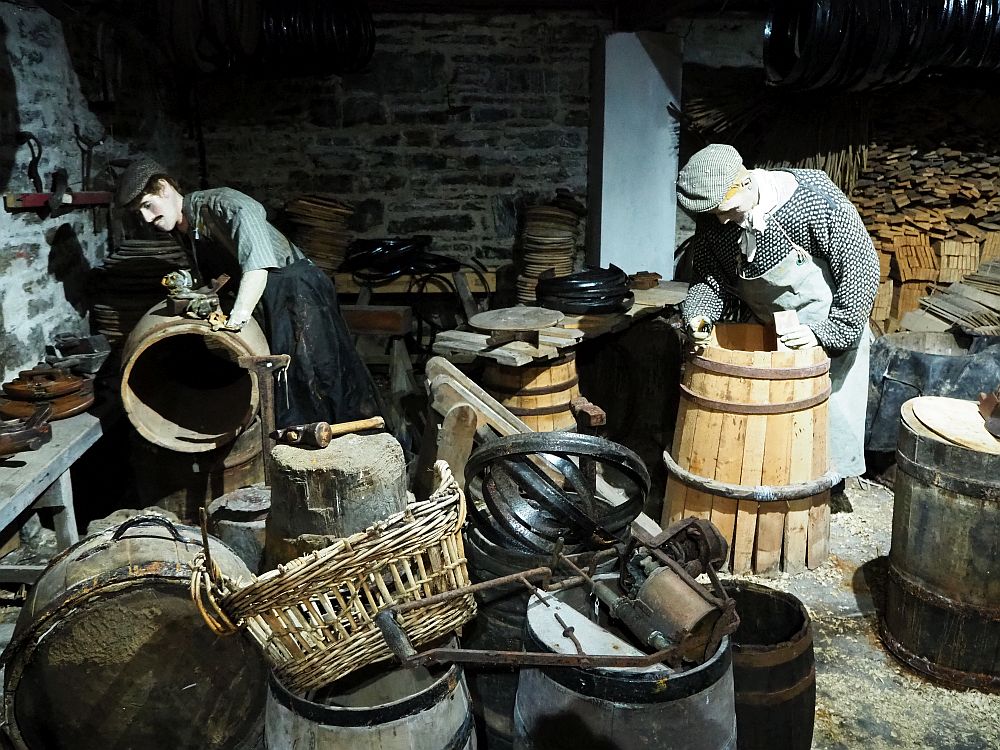 A simulated cooperage in the Wick Heritage Museum.

The real highlight of Wick Heritage Museum, though, isn’t any of the objects packed into it, or even the delight of finding more unexpected rooms to explore. It’s the photography. Wick Heritage Museum maintains the priceless Johnston collection of photographic plates. Some prints are on display around the museum, while many more are in their archives (50,000 or so). You can see them here on their website, where you can order prints as well.

While I can’t include any photos from the collection in this article – selling the photos is an important source of income for the museum – I can tell you they’re wonderful. Taken over more than a century by three generations of the Johnston family, these are fascinating images. Some are formal portraits, but many are street scenes, and they’re remarkably sharp and well-composed.

These photographers didn’t just limit themselves to the wealthy families or beautiful scenery. They took pictures of the gray streets of Pulteneytown, where grubby kids played and street sellers made a living. They photographed (and later filmed) the rows of women gutting fishes for curing. Some pictures show shop interiors, giving us an unstaged glimpse of what they sold. Some show the boats, the fishermen, the cargo ships, and the workers who loaded them. Clearly the photographers, despite the cumbersome equipment of the time, became so much a part of the street scene themselves that their subjects just ignored them and went about their business.

By the way, if photography particularly interests you, one of the recreated rooms somewhere in the maze of the museum is a photography studio, so you can get an idea of the kind of equipment they would have been carrying around for their street scene shots.

A Visit to the Wick Heritage Museum

If you travel in this part of the Scottish Highlands and are interested in the Scottish Highland Clearances or the fishing industry, or you just want to get an idea of how people lived and worked in the not-too-distant past in the Caithness region, make sure to stop at the Wick Heritage Museum. It’s not flashy and not particularly multi-media, but it’s fun and full of surprises. It could be just a half-hour walk-through, but will more than likely take longer. There’s so much in this TARDIS that something is sure to catch your eye and your interest. 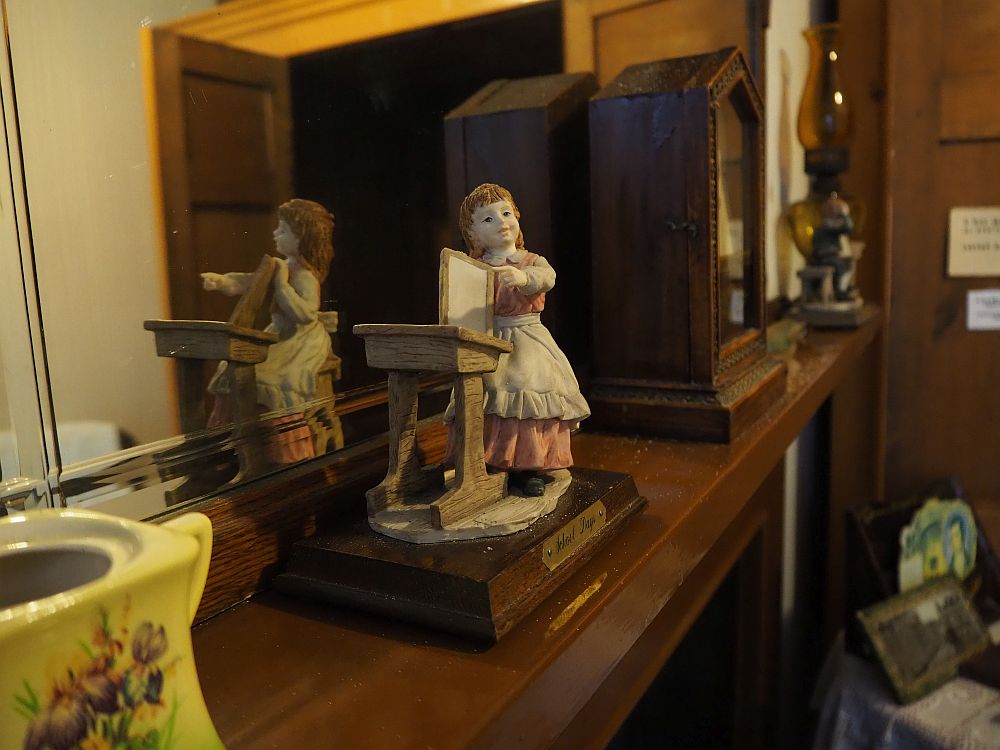 Detail from one of the overcrowded rooms at the Wick Heritage Museum. My mother called items like these that sit on shelves and collect dust “chotchkes”.

To find accommodations in Wick, click on this link to booking.com.

If you prefer not to travel on your own, both of the following tours include Wick:

Do you enjoy this sort of small-town museum? Or do you prefer museums that focus on the big events or great artists? Add a comment below! 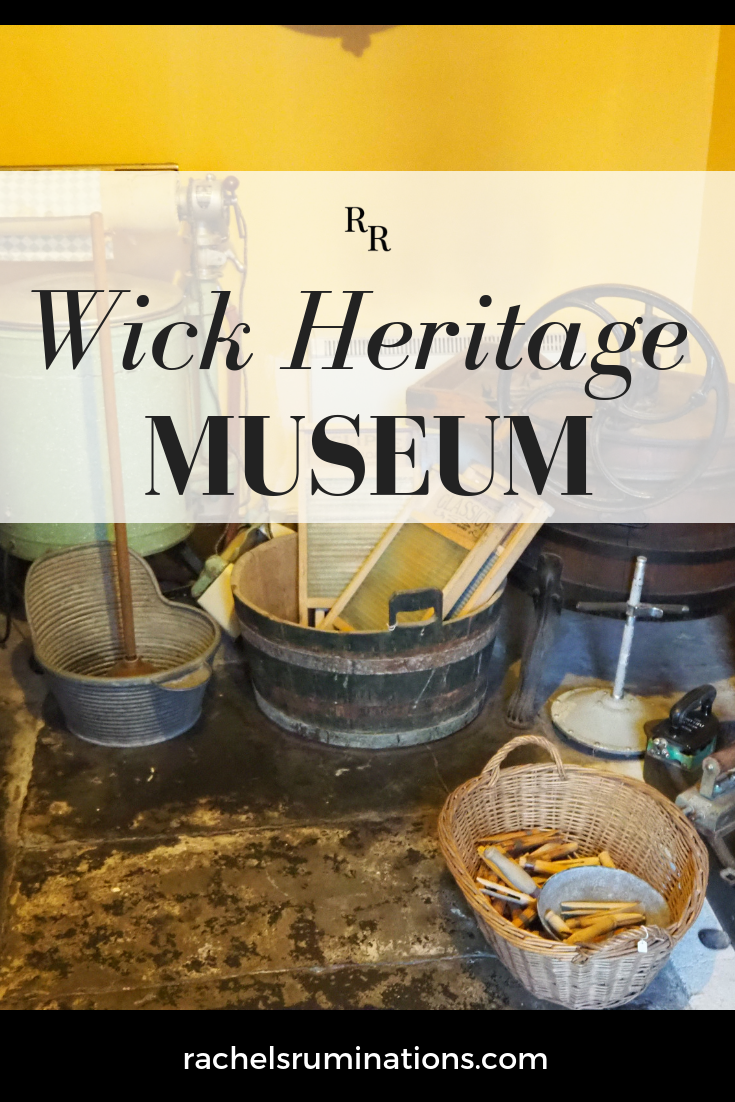 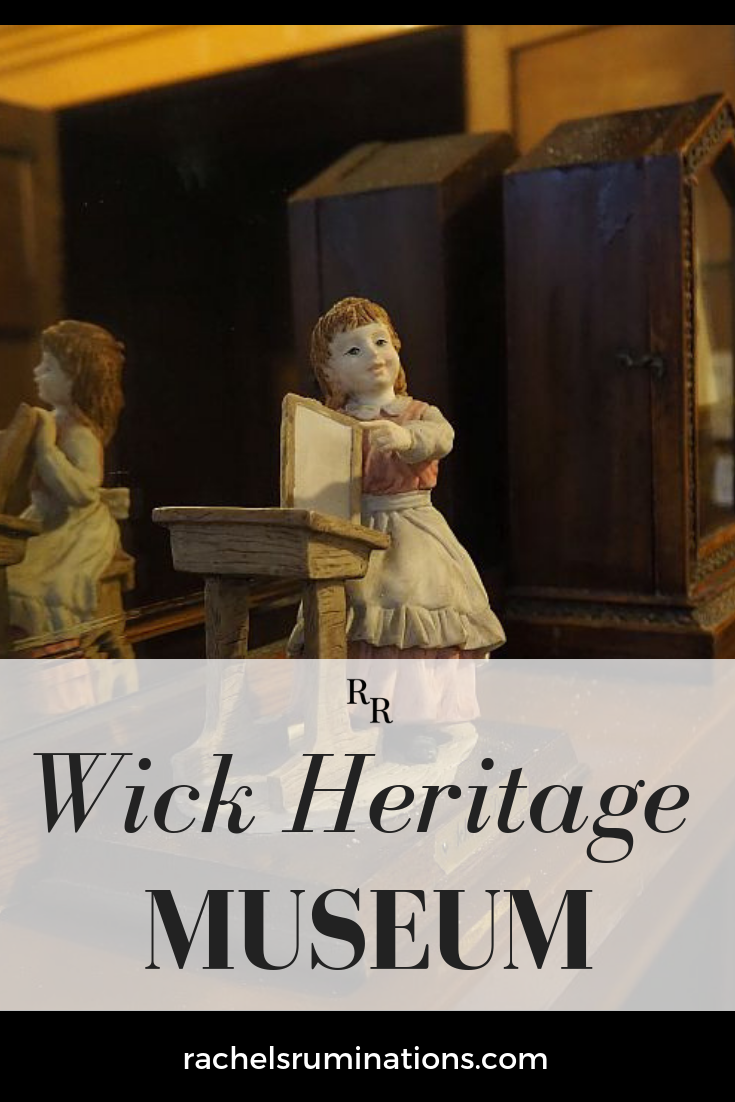