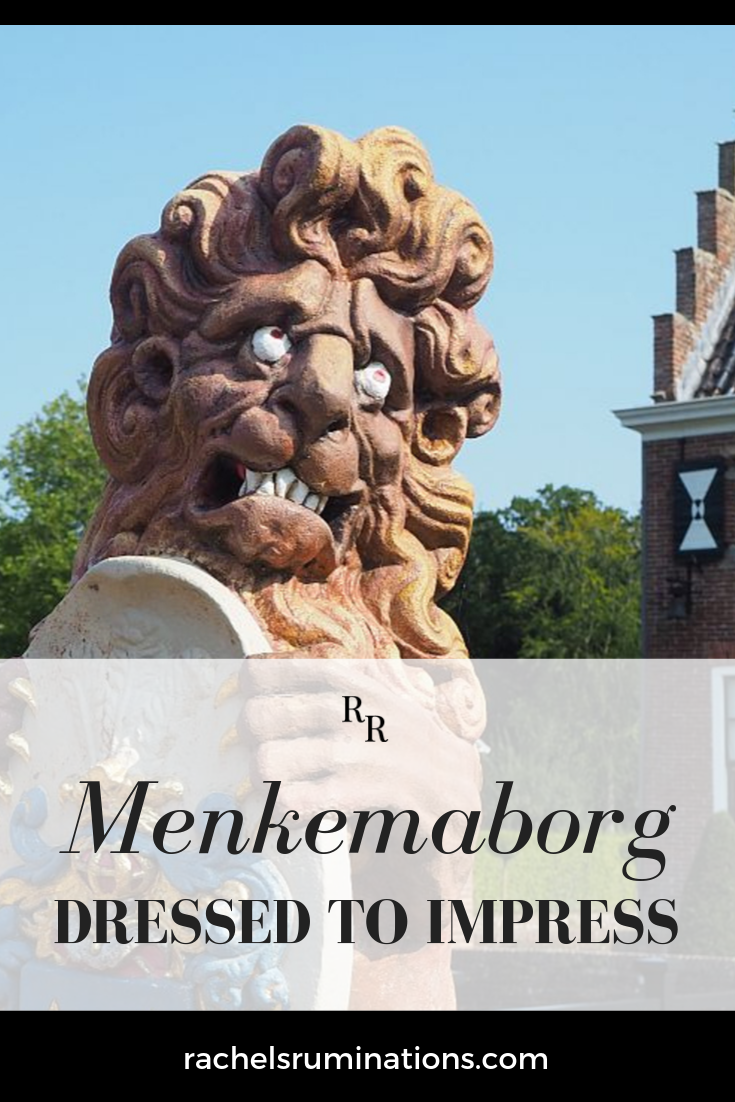 Groningen has three nearby manor houses or “stately homes” that are open to the public and furnished to allow visitors to learn about local history.

I’ve written about one of them before: Fraeylemaborg, which I only half-mockingly referred to as the “ancestral home.” Another is Menkemaborg, a similarly impressive display of wealth and social position far from the centers of power.

Menkemaborg makes an impression as you walk up the straight, tree-lined driveway. A pleasingly symmetrical structure, it doesn’t seem very large at first. Nearing the entrance, the moat comes into sight, along with a bridge leading to the front door. Two statues of lions flank the bridge: not the most skilled artworks I’ve ever seen. The expressions on their faces speak more of despair than grandeur.

There’s no specially-built visitor’s entrance here. Once you’ve paid your ticket, you walk up to that big front door right in the center of the picture and open it as if you were a visiting guest. Inside, that feeling continues: the rooms are decorated with furnishings from the 17th and 18th century, but objects of everyday use are also set out in a way that suggests that the person using them only just left the room.

The original brick house on this site, built in the 14th century, has been added to and changed over the centuries. At first just a simple rectangle, it was expanded to a U-shape in the early 17th century.

In 1700, the owners at the time, Unico Allard Alberda and his wife, Everdina Cornera van Berum, made some significant changes. They expanded it further, moved the front door to its present location, and ensured that the whole house looked symmetrical in the Baroque style of the time, with a wide hall down the center and nearly identically-sized rooms on either side.

The inside got some renovation at the same time, with artists creating pieces to order. The sculptor Jan de Rijk created the extremely ornate baroque mantelpieces.

The last inhabitant, a descendent of the Alberdas, died in 1902. The heirs gave the whole thing to the Groninger Museum in 1920 and it opened to visitors a few years later after a renovation. The rooms today are furnished entirely with pieces from the 17th and 18th century, just as if people still lived there.

If you’re traveling in Groningen province, you might also enjoy these articles:

There’s no required order of seeing the rooms inside; you can wander around in any way you want. Each room, mostly roped off, has a sign explaining what various furnishings and artwork are.

The hallway divides the house exactly in half. The portraits along the walls are from other stately homes that have been torn down.

The first room on the right as you enter the house was modernized at the end of the 18th century and, like all of the rooms, is decorated to that period. The mantelpiece is not original because of that modernization. On the wall you can find a portrait of the last inhabitant of the house, and also a portrait of the Wijchgel family from another estate. The two chairs in front of that portrait are the originals that appear in the portrait.

Notice, when you visit, the beautiful crystal chandelier and the big cupboard holding antique Chinese porcelain. The walls are covered in silk damask. Chinese products like these were very popular among the wealthier classes during the heyday of the Dutch East India Company in the early 17th century. Being able to afford such imports in your home was a clear sign of high status.

Across the hall (i.e. the first room on the left as you enter the house) is the herenkamer, which, loosely translated, means “gentlemen’s room.” It has a built-in buffet that can be hidden entirely behind two doors. You can also see more imported Chinese porcelain. The mantelpiece is an original Jan van Rijk.

Next to the gentlemen’s room is the dining room. The dishes on the table and the buffet date to the 18th century. The silverware bears the symbol of the Alberda family, so the set is original to this estate.

Across the hall from the dining room, the grote zaal, literally “big room,” is dressed to impress. It still holds one of the original mantelpieces carved by Jan van Rijk and the ostentatiously carved chairs are another sign of status. It doesn’t seem to me that they would be particularly comfortable to sit in.

The elegant crystal chandelier, the cabinets, the Persian carpet: pretty much everything in the room is meant to display wealth.

Up the small stairway at the end of the central hall, on the right, you’ll find the library/study. Besides an 18th-century desk, this room shows some typical children’s toys of the time. Many of the items in this room – the paintings, for example, and the linen wallpaper – come from other stately homes that no longer stand.

Also up the small stairway, opposite the study, is the bedroom. The grand four-poster bed dates to the early 18th century and the cloth is the original Chinese silk damask. Guests slept here – again, impressions were important – while the family slept upstairs, in rooms that are now closed to the public and were probably distinctly less grand.

Downstairs are the more modest rooms, in an older part of a building from before the extensive renovation of 1700. The kitchen has a low ceiling with heavy roof beams, and colorful tiles cover the walls. It looks like a place of hard, honest work, yet has a homey, comfortable air to it at the same time.

Off the kitchen, down a flight of stairs, is a storage cellar. Also off the kitchen are the rooms where the cook and perhaps others must have slept, complete with bedstees, i.e. cabinet beds.

This rather grand house has a moat directly around it, but also has another moat, in a neat square shape, further away. The formal gardens between the two moats have been restored according to the original garden plans from 1705, in a symmetrical, baroque style.

On one side – the right as you are looking at the front of the house – the “Pleasure Garden” is all precise lines and colorful flowers according to strict symmetry. Carefully trimmed hedges define the spaces. Here and there are statues on classical themes, mostly not of the best quality, in my view, but somehow fitting the tidy formality of the garden.

Beyond the Pleasure Garden on the same side is an interesting Sundial Garden. The markings on the ground of each time of day are plants: topiary yew shrubs.

Behind the manor house is a maze, restored just recently, where you can spend some time getting lost. The reward for reaching the middle is an ancient plane tree.

The land to the left as you face the house once supplied food for the manor. A kitchen garden produces the same vegetables that the inhabitants must have eaten back then. It also supplied medicinal herbs and spices for the household. If you’re there in the middle of the summer, the rose arbor that crosses the kitchen garden is pretty spectacular.

In the orchard next to the kitchen garden, a range of heirloom apple and pear varieties grow. I enjoyed strolling through the pear tunnel, where about 20 varieties of pears have been trained to grow in the form of an arch.

Around the outside of these formal gardens is a square of dense woods, with trees that are clearly very old. The next square, outside of the forested square, has green fields and fishponds.

What was once the stable, brewery, bakery and worker’s housing is now Het Schathuis, a café. Go inside and you can see how it must have held the horses and other livestock as well as living quarters for grooms and drivers. On a nice day, Het Schathuis is an atmospheric place to have a drink or meal outside, enjoying the view of the main house.

By car, take the N46 toward Eemshaven or the N361 to the N363. Plenty of parking is available. Don’t drive up the driveway to the house; the entrance to the parking lot is just to the left of the driveway entrance.

From Groningen’s central train station, take the train toward Roodeschool. The 7th stop is Uithuizen. From Uithuizen station, it is about a 10-minute walk.