The only part of this trip that I didn’t book in advance was a rental car from Aqaba to Wadi Musa, the home of the Petra ruins. I got contradictory advice: rent a car and drive there. No, don’t rent a car; you’re better off taking a taxi.

At the last minute, we decided to rent a car. To do that, we first had to cross the border from Israel to Jordan, then take a taxi into central Aqaba to a car rental agency.

Once we passed through Israel customs, walked across no-man’s-land, and then went through the entry requirements for Jordan (I lost count of the number of different officials who needed to see my passport.), we found a taxi immediately and negotiated a price to take us to the Hertz rental agency in the center of Aqaba.

The driver was very cheerful and very talkative. “This your daughter? This your wife? This your son? What your name?” This last was addressed to my son. He didn’t ask anyone else’s name. He took my son’s hat right off his head and wore it himself for most of the short trip.

He pointed to me in the back seat. “She smiling now, but not later. Maybe she kill you.”

Several more misogynistic comments followed, all accompanied by a smile and a laugh. Welcome to Jordan.

Soon we arrived at the Hertz agency in Aqaba and asked to rent a car. The answer we received was “There are no cars.”

Hmm. A car rental business with no cars. They must be joking. We chuckled. They didn’t.

Apparently it was the last day of Eid, and the cars had all been rented out. “The other car agencies will tell you the same.”

We were amazed. No cars?

“Did you reserve a car?”

“Well then that’s your problem.”

Not wanting to take their word for it, we went to four or five other agency offices nearby. Sure enough, no cars.

That meant we’d have to go by taxi, which was fine with us. There were taxis all over the center of town, recognizable by their green paint job, and clearly eager for business. One of them even followed us down the street as we were searching for rental agencies and then a bite to eat, though he eventually gave up. 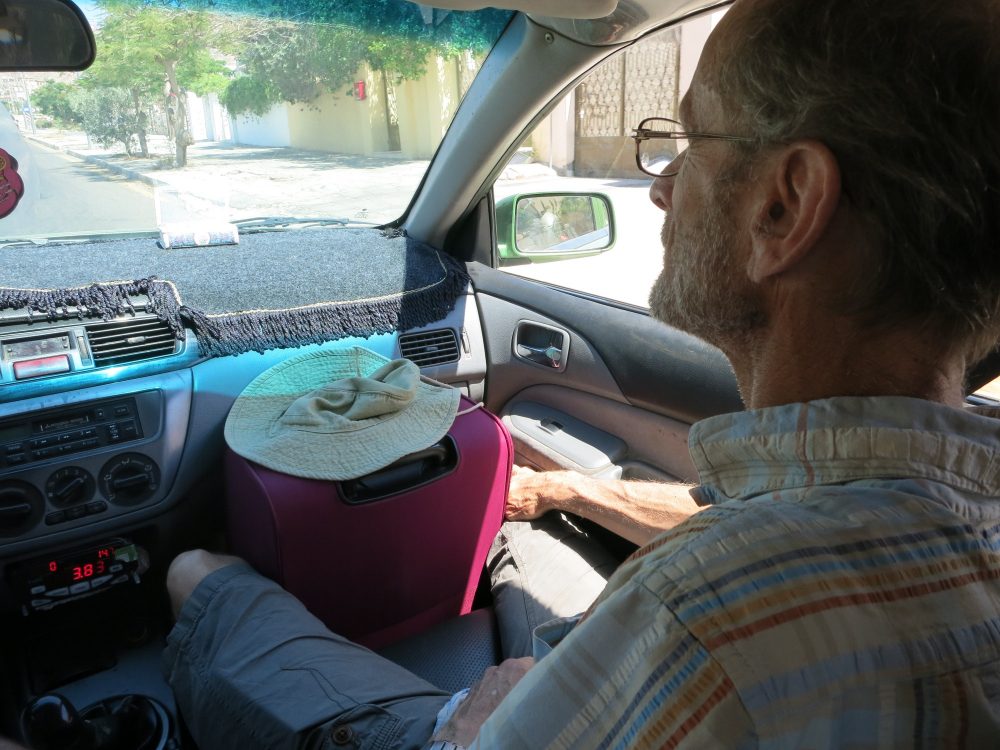 the suitcase jammed in the front seat with Albert

After we’d eaten, we hailed a cab, and we agreed a price for the two-hour drive. All of our luggage wouldn’t fit in the trunk, so one of the smaller bags had to go in the car with us. It ended up in the front between Albert’s legs. I was squished in the back with two adult-sized kids. Remember that this was in Aqaba and it was probably around 40⁰ Celsius outside. With so much weight loaded in the car, it drove pretty sluggishly too. My heart sank. This would be a long two hours.

The driver was friendly and talkative, though his English consisted of “Me no English. Taxi man good English.” He called up the “taxi man” and handed the phone to my husband, Albert, who told the voice that we wanted a one-way trip. I guess the driver hadn’t understood that when he named a price.

We were still in Aqaba when we stopped at a gas station to fill up. Another cab pulled up at the same time and the two drivers had a quick conversation, which ended up with us switching to the other, slightly larger, cab. “Taxi man good English. Me no English.”

Thankfully, we moved our luggage, which all fit in the trunk this time. This car was a later model, and the air conditioning worked better too. We were on our way. 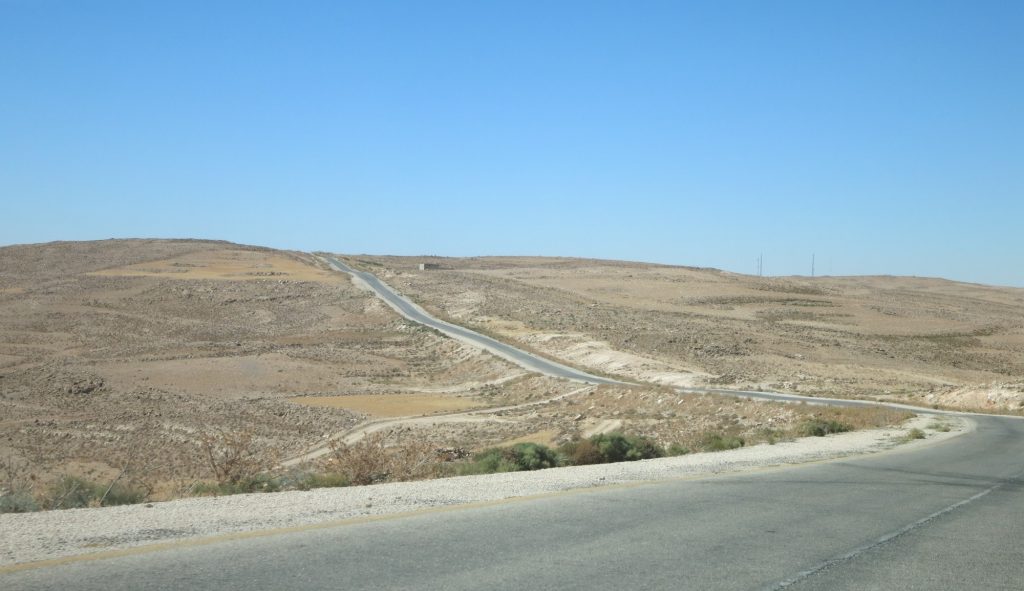 the road somewhere between Aqaba and Petra

The scenery between Aqaba and Petra was quite dramatic at first and rather desolate: brown mountains and crags against a brilliant blue sky. It gradually gave way to rock-covered rolling hills, with somewhat more vegetation – short grasses – though it all looked dead because it was the same light brown as the stony ground.

No one seemed to live in this area except some Bedouins, whose tent encampments, with herds of sheep and goats, we passed from time to time. 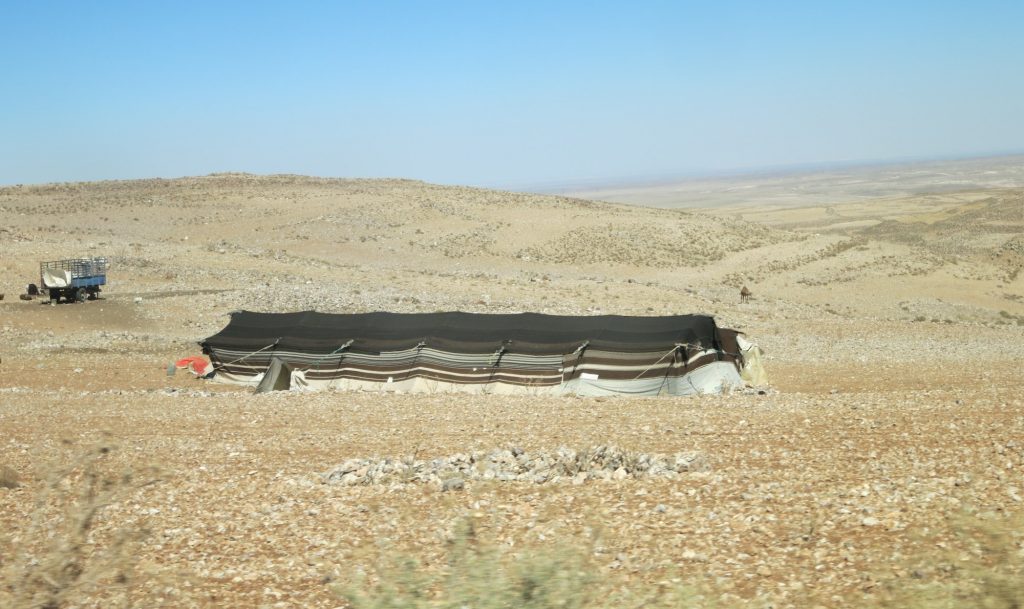 The road on this route is very smooth and well-paved, with more uphills than down, and long, gradual curves. The scenery was monotonous, and the car was comfortably cool, so all three of us in the backseat gradually fell asleep.

Brakes slamming, squealing tires. I jerked awake as I felt the rear of the car swerve sharply to the left. The highway was flat at that section, and three lanes wide, I think, and for some reason we were skidding toward the center barrier.

I had time to think “Wait a minute, the nearest other vehicle is that truck over there in the right lane. It’s nowhere near us.” And “Oh, sh*t, no seatbelts.” And “Maybe he’s avoiding an animal in the road.” And “Oh, sh*t, we’re all going to get injured if we hit that middle divider with the back of the car. I hope he slows us down enough so we don’t flip.”

Within a few seconds, the driver had regained control of the car, and we were out of the skid, driving normally again.

The driver: “There was oil on the road from one of the trucks.” (This driver did speak pretty good English.)

Albert, in Dutch: “He fell asleep at the wheel.”

That did not inspire confidence. We stayed awake for the rest of the journey.

Albert told me later that he’d actually reached over and grabbed the wheel, which was what started the skid. The driver was heading to the left, straight for the center divider, and Albert realized he’d fallen asleep.

Albert had stayed awake, he told me, because he was already suspicious of this driver’s wakefulness. He’d noticed that sometimes the car seemed to stray close to the side, only to be pulled back in the lane, rather than how an alert driver will generally just stay in the lane.

So that was our near-miss yesterday. We got to Petra in one piece, thank goodness. And we’re hoping to be able to rent a car for the drive back to Aqaba in a few days. Wish us luck!