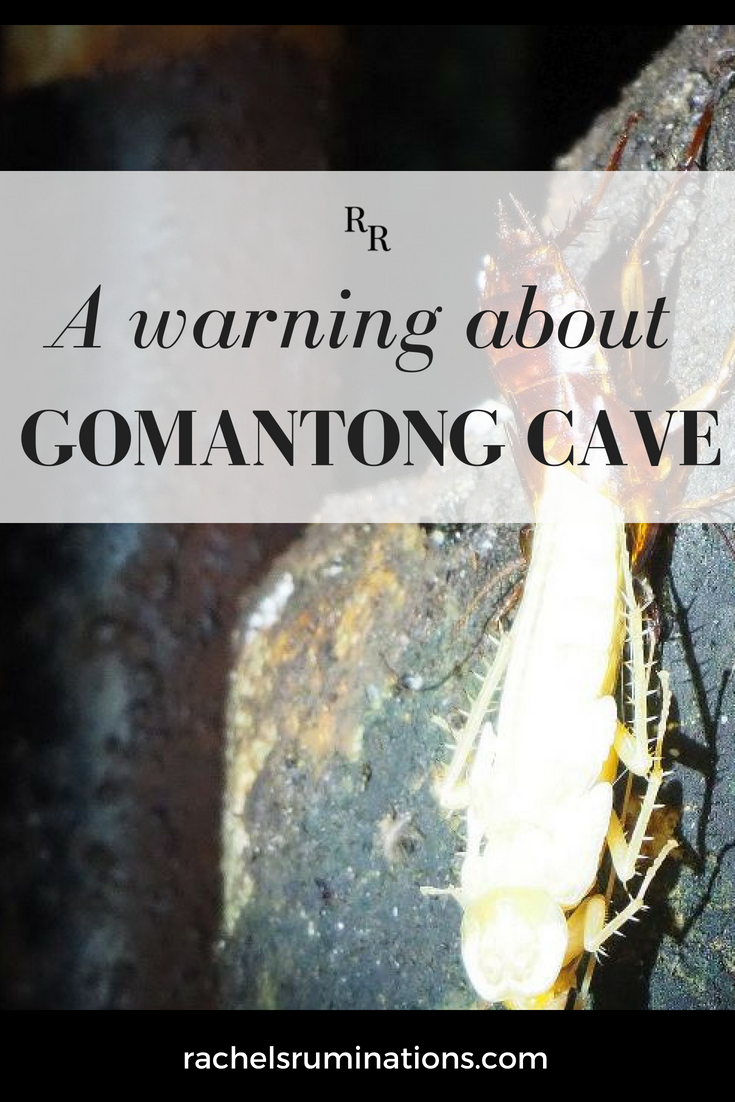 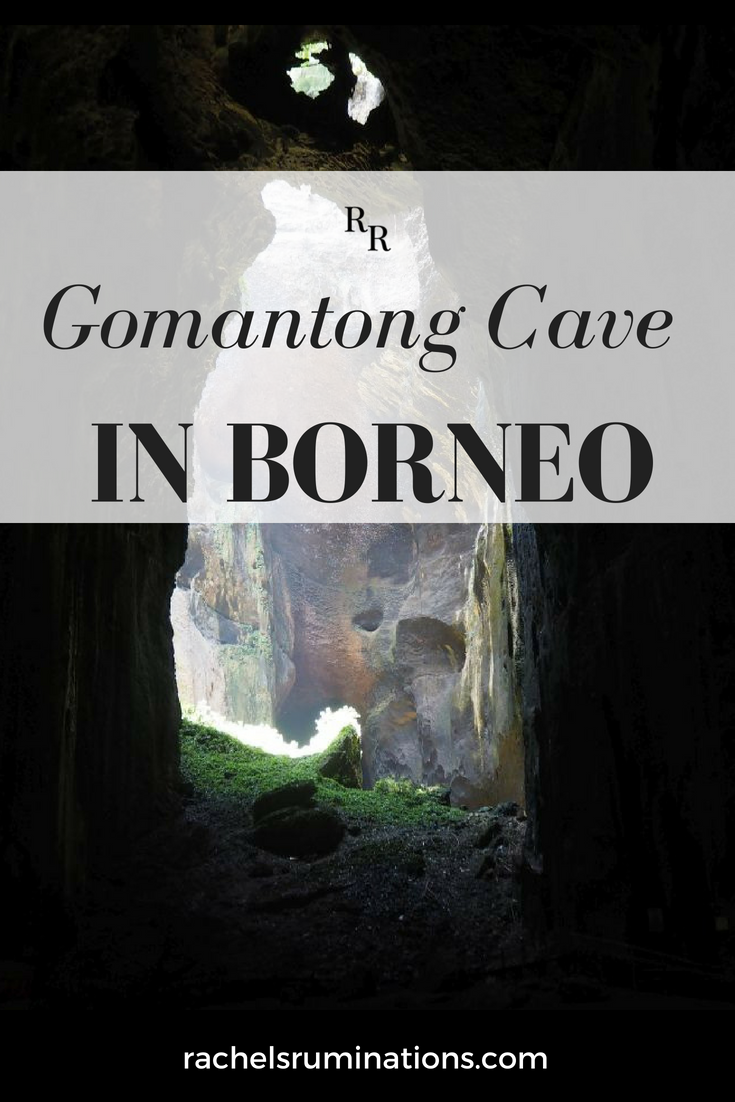 Bat guano, cockroaches and other grossness. That’s what awaits you at Gomantong Cave in Borneo.

A standard stop on the adventure tourism circuit in Sabah, the eastern part of Malaysian Borneo, Gomantong Cave is near enough to the popular river boat rides on the Kinabatangan River to make a relatively short detour.

So that’s what we did. And now I want to warn you about doing the same thing.

I’m not saying you shouldn’t go. It’s a large and impressive cave. The way the light filters in through holes far back in the cave is quite beautiful.

However, if you are at all squeamish about creepy-crawlies of any sort, you might want to think twice about going there.

The first thing that struck me as I approached the cave was its “wow” factor: it’s huge and quite beautiful.

Within a moment, the smell hit. This cave stinks. The reason this cave stinks is that the center of its floor is filled with a massive pile of bat sh*t, more politely called guano.

A raised boardwalk leads to the entrance to the cave, and then continues into the cave to form a large loop along the edges of the floor of the cave: around the huge pile of guano. We took the left entrance to circle the cave clockwise.

The cave is crawling – literally crawling – with cockroaches. They crunched underfoot, covered the stone wall of the cave to our left, and appeared here and there on the railing among the bat guano stains.

It was the stuff of nightmares.

But it didn’t stop there. As we walked the boardwalk – and I walked extremely carefully for fear of slipping and falling and actually having to touch something with anything other than the soles of my shoes – Oh, no, I was wearing open sandals! – we passed an assortment of other bugs: a big hairy spider, for example, and an assembly of millipedes, equally hairy.

I’ve learned since our visit that besides all those bugs there were also rats as well as snakes that feed on the rats.

Above us, we saw bats: thousands of wrinkle-lipped free-tailed bats. Yes, that’s what the species is actually called, though I didn’t get close enough to see if they really had either wrinkled lips or free tails. It was daytime, so they were sleeping.

So what were those creatures flying around up there just like bats? Swiftlets, a small black bird that also likes to sleep in caves hanging from the wall, but during the night.

As we walked, our guide was calmly explaining the industry built around those swiftlets. Two sorts of swiftlets (black-nest swiftlets and edible-nest swiftlets) make nests out of their own hardened saliva. The nests hang on the walls of caves, and these nests are edible. They’re used in parts of Asia for bird’s nest soup, and they’re very valuable.

The fact that these birds’ nests are edible must have been discovered sometime hundreds of years in the past. Someone must have gone into one of these disgusting caves, taken a nest off the wall, and eaten it. Or maybe he/she cooked it first.

Who thinks of that? Who would take a bird’s nest and consider it food?

The nests are so valuable that the swifts are threatened, since people harvest the nests when they shouldn’t, and the population drops as a result. So this cave is protected by guards. Our guide pointed out the guard posts: one small wooden cabin at the entrance, and one at each of the openings we could see in the distance.

Even though this is a protected cave, the nests are still harvested, but only after they’ve been abandoned. Our guide pointed out the contraptions that the men use to reach the nests high up on the walls.

It was all very interesting, but I just wanted to get the hell out of there without touching anything.

We came at last back to the beginning of the loop where we’d started. Our guide explained that sometimes that huge pile of guano in the center is even bigger, but whenever it rains, some of it washes into a small stream he pointed out below us, between the walkway and the cave wall.

It hadn’t rained in a couple of days, so the stream was just a trickle, but it was a thick, black, disgusting trickle. And there were crabs in that trickle: live crabs. Something actually lives off of a stream of water thick with bat sh*t.

Should you visit Gomantong Cave?

If you’re squeamish? No, absolutely not! It is simply horrifying to walk there, because you will literally be crunching on cockroaches as you go.

If you’re not squeamish? Go ahead, but beware: you may not mind a cockroach here and there, but this is thousands. And it stinks.

There are actually two main caves: the one we went into is the “black cave” and mostly holds the less valuable black nests. It’s the only one open to the general public. The bigger one behind it is called the “white cave” and mostly has the white nests. It is only accessible by prior arrangement and with the proper equipment for spelunking. There are another dozen or so smaller caves in the cave complex.

Every evening between 17:15 and 18:15 you can witness the changing of the guard, when the bats wake up and fly out of the cave and the swiftlets come in and settle down for the night.

Gomantong Cave in Borneo is 35 kilometers from Kota Kinabatangan and 110 kilometers from Sandakan. There’s no public transportation, so you’ll need to hire a taxi or rent a car. In our case, it was an add-on to a three-day Kinabatangan package that included a homestay, riverboat wildlife viewing and jungle trekking.

If you decide you still want to see Gomantong Cave, you can arrange it by clicking on one of the tours below. Both combine Gomantong Cave with a river cruise on the Kinabatangan River.

Admission to Gomantong Cave is expensive, considering how little time you’ll probably spend inside the cave. We paid 30 ringgits (about €6 or $7) for the privilege of being totally grossed out.

If you go, wear closed shoes with a good tread so you won’t slip. Gloves would be a good idea too. If it’s rained, the walkway can be slippery, and if you slip, you’ll have to touch something.

Take my word for it, you don’t want that!