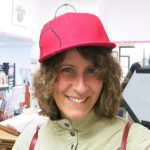 I am an expatriate: an American citizen, now living in the Netherlands. But I’m not entirely comfortable with the putting myself in that category: “expatriate.”

When I first heard the term, it was in high school, when I was taught about the movement of American writers to Paris in the period after the First World War: writers like Ernest Hemingway, Henry Miller and Gertrude Stein – the “Lost Generation.” These writers were explicitly rejecting the US for its artistic limitations.

Nowadays, the term is used differently. It refers to people who live in a foreign country, usually temporarily, because their employer sends them there. They are unlike other foreigners – who might be called “immigrants” or “migrants” or “refugees” – in that they are well-off, well-paid, middle-class individuals or whole families, and their intention is only to stay for a few years. These expatriates generally don’t learn the local language, and don’t mix much in the local culture, since they’ll soon be leaving again anyway. Their children generally attend international schools, if any are available.

The problem for me is that neither of these definitions applies to me, or to many other people I know. Yes, we have chosen to move to another land, like the Parisian expatriate writers, but we are not necessarily rejecting our homeland. We’re usually not moving away from anything; we’re often moving to something: better weather, for example, or, as in my case, we’re moving for love. I live in the Netherlands because of my husband, who is Dutch.

We are often, but not always, relatively well-off and well-educated, like the modern definition of an expatriate, but we have not been told to move by an employer. Instead, we search for a job in our adopted country on our own terms. We learn the language and blend into the culture. We make local friends. Our children generally go to local schools and grow up bilingual: our language and the local language. Some grow up trilingual: a language from each parent and the local language as well.

And, most importantly, we intend to stay. Not as a rejection of our homeland, but because of whatever led us to move in the first place, often a spouse. We may take citizenship in our adopted country, or we may not, but we usually do not give up our birth citizenship.

So although I call myself an expatriate, I’m not comfortable with the term. I’m more assimilated and permanent than that, but don’t entirely reject my origin. I’m not a migrant, which implies moving from country to country. I am certainly an immigrant, but the image that word projects these days is a person who is poor and looking for a better economic future in a new country. I’m not a refugee: I didn’t have to leave my country of origin due to political or economic hardship.

I think we need a different word: one that applies to people like me who move to a new country by choice, independently. Émigré, perhaps?

Do you have any suggestions? Leave a comment below!