We went to the beach yesterday in Middelkerke, on the North Sea. It was one of those typical beach towns with rows of ugly concrete apartment buildings fronting a long, straight, not-particularly-scenic beach. As I watched the people around us, I was strongly reminded of something I wrote back in 2008 on a trip to Malta. Rereading it, I realized that most of it applies here in Belgium, except for the pretty scenery and the trash (At the beach in Belgium, there isn’t much of either). So I thought I’d repost it today:

Have you ever noticed the way people behave at the beach? We’re on Malta right now and we’ve been going to the beach most days. I’m reading a book called The Black Swan, by Nassim Nicholas Taleb. It’s fascinating, but Taleb is one of those writers who doesn’t waste a sentence, so I have to be very focused to follow what he’s saying. So I’ll read a section and then relax while I let the ideas sink in. That’s when I start watching the people around me at the beach.

Next time you go to the beach, try just looking around you and observing human behavior. It’s truly bizarre.

For example, we wouldn’t be caught dead walking down the street in underpants and bra, yet on the beach we wear just that, only often it’s even skimpier than what we normally wear under our clothes.

And observe the way women behave in bikinis: they’re constantly touching themselves. They tug down on the back of the bikini bottom, they readjust the top of the bikini bottom, they untie and retie the strings at the sides or behind their necks, they tug down on the bikini top or tug it up to prevent falling out. They’ll often glance down at themselves before or after all of this touching. Most of the time, none of this has any actual effect whatsoever: the clothing is not moved so much as a centimeter. I think what women are doing is simply checking that it’s still there; they’re wearing so little that they feel naked and they need reassurance that they’re not.

Children don’t check themselves at all, and most men don’t either, even when, on occasion, they probably should (Think plumber’s crack. Think speedos.). Today on the beach I did see one man who repeatedly crossed his arms across his chest and tweaked both nipples simultaneously, then patted both breasts while glancing down at them as if he was checking that they were still there. Okay, that’s pretty unusual, but fascinating to watch. I hate to think what conclusions a visiting Martian would draw from that behavior. 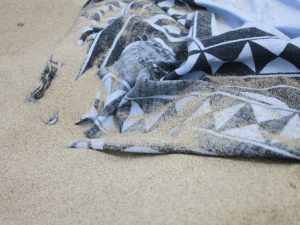 Then there’s the sand. Beaches have sand. Actually, here in Malta, there are very few beaches with sand, so the ones with sand are absolutely packed with people on weekends. But what is the draw of sand anyway? We rent lounge chairs so we won’t have to lie on the sand. Even if we do lie on the sand, it’s with a very carefully arranged mat or towel under us so we won’t have to touch the sand. We spend a ridiculous amount of time at the beach brushing sand off ourselves, shaking out towels, rinsing our feet in the water and so on.

So the point of all this seems to be to lie in the sun. Why do we do that? We know tanning, and especially burning, is bad for us, yet that’s what most people are busy doing. We know it’s bad for us, so we slather ourselves with lotion, but then feel that we can stay even longer in the sun, as if the lotion is a magic charm. Judging by the amount of red skin I’ve been seeing at the beach, the magic has worn off.

We could lie in the sun in lots of other places besides the beach, so why go to the beach?

To swim? Presumably, but the people I was watching did very little of that (other than children, of course). And many of the tourists could just as well go to their hotel pool, where they wouldn’t have all of that sand to contend with.

To see and be seen? I think that applies for the teenagers, who are clearly fascinated with each other, but never actually have the nerve to approach anyone outside of the group they arrived with. All of the adults keep studiously to themselves and their own family or group. Each group stakes out a territory and they are visibly annoyed if another group settles in too close to them. No one interacts with anyone else if they can possibly avoid it. The exception is children, who will approach each other and play together.

To enjoy the scenery? There is a lot of pretty scenery here in Malta: dramatic rock formations forming picturesque bays. But once you look closer, there’s also a lot of trash on the beaches and in the water. This doesn’t seem to bother anyone. At the beach we went to today, we had to wade through all sorts of trash – plastic bottles, plastic bags, chips wrappers, etc. – to get to clear patches of water. And anyway, everyone’s either lying down with their eyes closed or reading a book, so no one’s looking at the scenery anyway.

So what we do at the beach is strip to almost naked, touch ourselves a lot, brush sand off our bodies, smear lotion on our bodies, lie in the sun exposing our bodies to harmful UV rays, and perhaps take a swim. In other words, it’s all about our bodies: a vain, idle, pointless waste of time with no higher redeeming purpose. A lot like sex. So why do we do it? Because it’s fun!