The Dutch are absolutely fanatical about football (soccer, for American readers), and perhaps even more fanatical about supporting their national football team. You can always identify the Dutch people in the stadium: a small sea of orange (the royal family of the Netherlands is the House of Orange); their faces painted, often in red, white and blue (the colors of the national flag); waving flags, and so on. 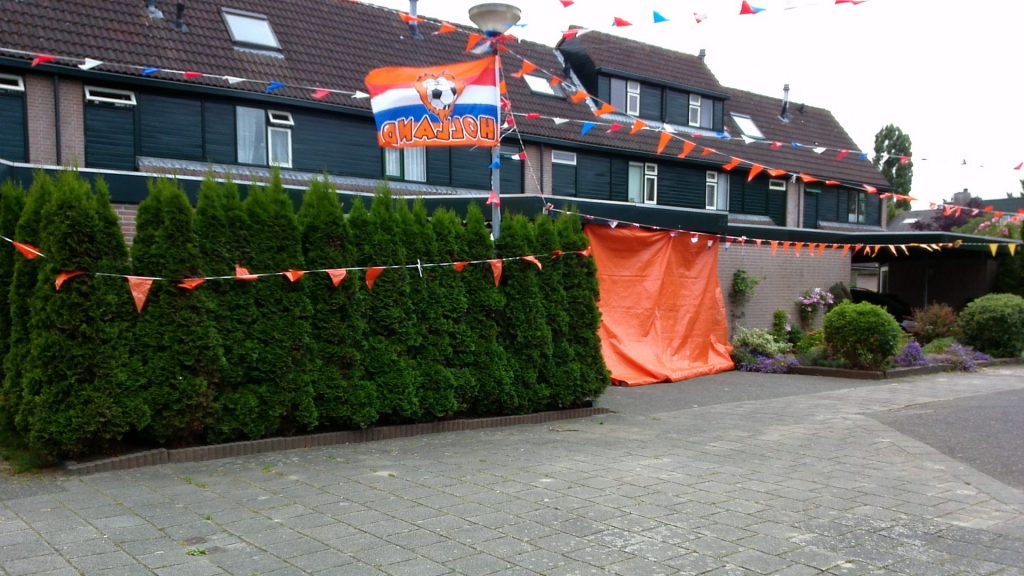 Which is why I was surprised to notice, in the lead-up to this year’s World Cup, that people weren’t getting nearly as excited as usual. Yes, there were the usual sales at supermarkets of orange banners and clothing and such, often free if you bought a crate of beer, but that wound-up nervous anticipation that led up to the World Cup last time just wasn’t there this year.

I should point out that I had absolutely no knowledge about our national team going into this World Cup. I didn’t know if they were any good or what other teams were in their pool for the first round or really … anything. I am most definitely NOT a football fan.

As a matter of fact, we moved from being a one-TV family to being a two-TV family eight years ago because of the World Cup. I was so fed up with having no access to the TV for weeks at a time that I decided that it was time for a second TV. 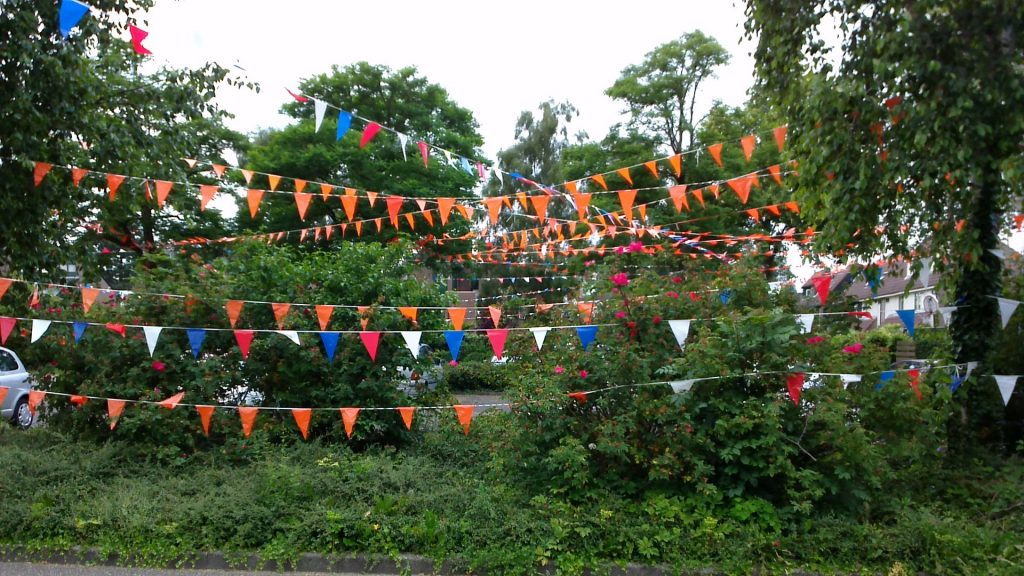 Despite the low expectations, all the usual neighborhood decorations have appeared.

Yesterday, before the Dutch team’s first World Cup game, I was listening to the radio in the car. People were making predictions about this game, against Spain. Apparently this first-round match-up was terrible news for Holland because Spain is the European and world champion. The most optimistic person interviewed predicted that the Dutch would win 1-0, but most thought Holland would tie with Spain or lose.

That explained the rather subdued mood around here: low expectations.

Friends of ours across the road invited us to go watch with them. I don’t usually watch the World Cup, or any other sports, but the idea was that the two men could watch and the two women who don’t like football could chat, since we haven’t seen each other in a while. (Isn’t this a tremendous cliché? But in our case, it’s true. Football for the men, a nice chat for the women.)

Nevertheless, we (the women) kept an eye on the TV too, and when Spain scored the first goal, I thought “Yep, the predictions were right. Spain’s going to win.”

(I have to say, though, that even to my untrained eye, that first goal wasn’t fair. Spain should not have gotten the penalty kick that got the goal, since the “foul” wasn’t a foul if you look at the replay.)

But, as you probably already know, there was a big surprise last night: Holland won. And they won well! 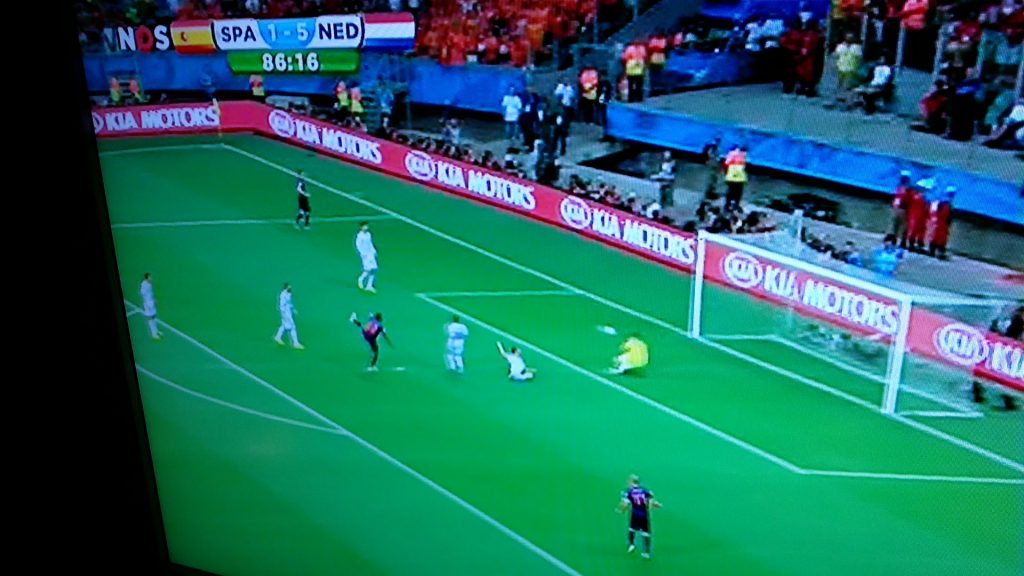 By this late in the game, it was a done deal!

The Dutch team’s first goal was a beauty, and from that moment, the game actually caught my attention. Something about Holland being the underdog defying expectations made it interesting.

After the game, outside, we could hear the city celebrating: someone had kept some fireworks from New Year’s, so we heard them. Someone had what sounded like a vuvuzela from the World Cup in South Africa, so we heard that. And a whole lot of whooping and general expressions of joy.

What’s funny is that this was just the first game of the first round of the competition. Holland’s chance of winning the World Cup is still very small. It doesn’t seem that Dutch people even care about any of that. Holland beat Spain: revenge for the 2010 World Cup when, in the final, Spain beat Holland to become World Champions. Revenge is sweet.

I think I might even watch Holland’s remaining games.