Social status seems to be a big issue in Burundi. We were certainly all aware already that there is a big difference between the poorest to richest here. It’s visible is lots of ways. Only wealthy people get fat, for example. Wealthy people have stylish glasses and shoes. Their clothes are neat and clean, quite an achievement in such a dusty area, where the dust has a reddish colour.

The difference is most visible in the women. Both rich and poor wear the brightly coloured African fabrics, which seem mostly to be imported from Nigeria. However, they wear them different ways. The poor wear the fabrics wrapped around themselves, with one for a skirt, and perhaps one over one shoulder, over an old shirt. 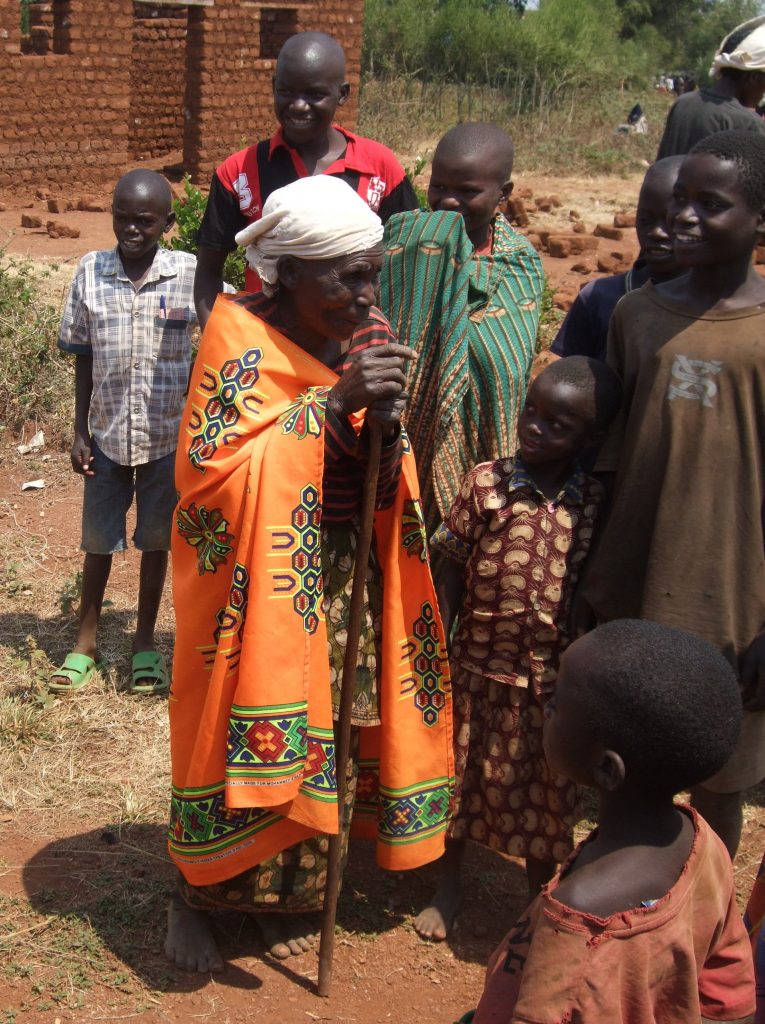 an old woman in fairly typical clothing among the poor

The rich women have the fabric tailored into dresses: not really western, since the colours are too bright and the patterns too busy, but attractive and sophisticated looking. Their hair is also different: the poor women wear their hair cropped very close to their heads, almost shaved. The rich women sport sometimes quite ornate hairdos, with hair extensions and complicated braidwork, for example.

So social status is immediately visible. But it is also expressed in how people behave towards each other. Those with a higher status seem at times to be positively scornful of those with a lower status. The other day, when I was sick in bed, the others were invited to have lunch with the manager of this hotel. They were horrified at the way he clapped his hands to summon waiters and ordered them about. Burundians ordering food in the hotel’s restaurant have a similar attitude.

Even our teachers, whose pay is remarkably low (I’ve heard it’s about 83 euros per month!), don’t do their own cooking. They hire a servant at about 6 euros per month to do the cooking, cleaning, laundering (by hand, of course) and ironing. One of the teachers explained this to us: they’re uneducated so there’s nothing else they can do, so it’s the only job they can get.

Given this consciousness of status, the Burundians often seem puzzled by our behaviour. The women who serve in the hotel’s restaurant seem very uncomfortable with our attempts to be friendly to them. The teachers we’re training keep stepping in to “protect” us from the street children who constantly follow us around.

I think what it comes down to is that whites just don’t fit comfortably into the existing social scale. They don’t know where to place us. Given that we’re so wealthy, compared to them, we belong, in their view, at the top of the scale. At the same time, we don’t behave the way we’re “supposed” to, which makes them distinctly uncomfortable.