I read quite a bit in guidebooks about Beijing before we came here. Much of what we read was true, but a lot of what I’ve seen (and it’s only been two days) has taken me by surprise.

–Yes, as I read in the guidebooks, dog is on the menu. But what I didn’t expect to see was that people also have dogs as pets. Do you suppose that the ones with pet dogs refrain from eating them? Or do they park their dog on a leash under the table while eating its cousin for dinner?

–The traffic is indeed bad, but not nearly as chaotic as the guidebooks make out. And the roads are very well-paved and well-maintained. Of course, I understand that a lot was improved ahead of the Olympics, but I didn’t expect SO MUCH to have improved.

–The level of spitting on the ground and of smoking are not nearly as high as the books make it out to be. Again, this could be a result of the Olympics.

–I knew that China is the new economic power, but I didn’t expect the level of conspicuous consumption that is visible here. You can buy Levi’s jeans or a Mercedes or a Gucci bag, if you have enough money. I don’t get how that can possibly coexist with Communist ideology.

–At the same time, I’m surprised at the level of poverty that’s also visible here. The newspapers at home have reported lately about how China is making an effort to reduce the city-country divide in terms of income. I haven’t seen any of the countryside yet, but there are a lot of poor people right here in the city. 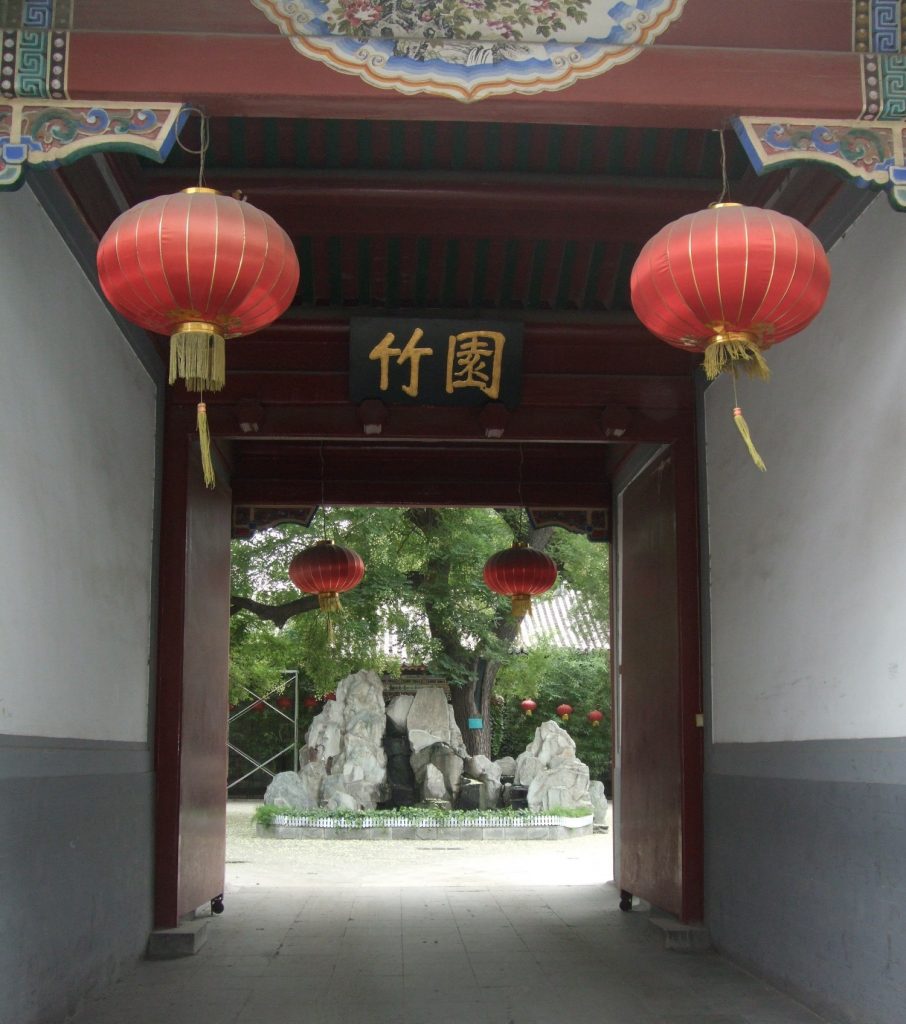 the entrance to our hotel

Our hotel is in one of the traditional courtyard buildings in one of the remaining ‘hutong’ neighbourhoods of Beijing. These are the sorts of neighbourhoods that used to make up the whole city, with each extended family occupying a house built around one or more courtyards. As I walk down the lane, I can peer into some when people leave the doors open (otherwise it’s just walls that face the street). Inside, except for places like our hotel, there are what looks like rows of small one-room brick shacks opening onto their courtyards, and it looks like the courtyards have also been built in, so there’s little open space left at all. I noticed in one of the entranceways a row of electric meters: somewhere between 10 and 20 meters in what was originally a single family home. I’ve also seen several street people, and the fact that the parks are exceptionally well-kept means that there are a lot of manual labourers out there.

–The public toilets are indeed smelly, as the guidebooks say they are. However, I think they are actually the primary toilets for the people living in these former courtyard houses. There are too many of these public toilets to be anything else, especially on a small, narrow, unimportant street like this one. I also think that those without facilities in their homes get shampoos at beauty parlors.

–As the guidebooks say, people do push and shove instead of queuing. There were some very little elderly ladies at the Forbidden City who pushed and shoved with the best of them.

the entrance to the Forbidden City

And in the metro, despite very clear signage about letting people off first, everyone crams in and the people trying to get out just have to push through.

–On the other hand, the metro trains come about one or two minutes apart, and the stations and cars have clear direction signs and maps and they’re clean and not at all smelly! The New York City system could take a cue from Beijing!

This all leads me to look forward to the sightseeing we have planned for outside of Beijing. Will it be visibly poorer, as the newspapers indicate? Or will we still see McDonald’s and chicly-dressed women? Will people spit more in public? Will the roads be worse and the driving wilder? I’ll let you know…