The first time I traveled solo, I made four mistakes and one good decision.

It was my junior year of college: 1983. I’d traveled before, but always with family. I had enough credits to skip a semester but still graduate with my class, so I decided to spend my “gap semester” in France, ostensibly to practice my French.

I put a classified ad in a French paper, offering my services as an au pair. I didn’t really care where in France I would be, so I chose which paper to advertise in based on the advice of a French professor.

My first mistake was listening to that professor, who, I realized later, must have been joking. I put the ad in La Libération, a very left-wing, counter-culture paper. Bad idea: it draws out all the crazies.

I didn’t have a French native speaker check my ad before I sent it in. While in the ad I claimed that I was fluent, I made a grammatical mistake. Oops. Right under my ad the editor of the section added a snide comment about my fluency. Sigh.

me in Athens, backpacking around Europe after my adventures in France

Nevertheless, I got a few replies, mostly the aforementioned crazies, but I arranged to work for a family in a ski station in the Alps. They lived in a chalet, they wrote me, with a crêpe restaurant on the ground floor. They needed me to take care of their son, who was a year and a half old.

So off I went, arriving in Paris to be met by relatives of the family I would be working for. A couple of days later they put me on a train. The wife of the couple (Let’s call her Sophie.) met me at the train station and drove me on a breathtakingly scenic—and somewhat frightening—route up into the mountains. 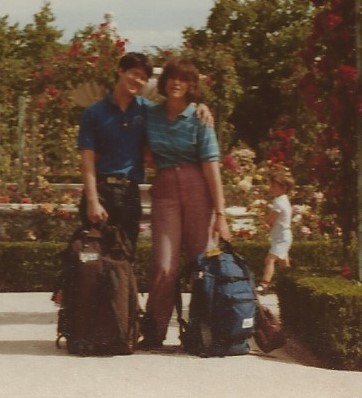 I backpacked with my friend, Stuart. Sorry the pictures are so blurry: they’re scanned from old-fashioned prints.

The chalet, when we arrived, was indeed lovely, with a gorgeous panoramic view. Inside, however, was somewhat discouraging.

The restaurant on the ground floor seemed pleasant enough. Upstairs, though, was simply small. There was a small living room and kitchen, with a stairway up. Under the stairway was just enough space to fit a single bed, which would be my space.

But it gets worse. The only bathroom, it seemed, was on the top floor. Besides the baby’s room, Sophie and her husband, who we’ll call Emil, had their room there. In order to get to the bathroom, I had to walk upstairs and then through their bedroom. What if I had to pee during the night? I’d have to walk by where this married couple was sleeping? As you can imagine, I was less than thrilled at the prospect.

So the next day they set me to work. I was told that my duties would involve:

This would add up to about 11 hours of work, minus meal times, but I agreed. At least I’d have the afternoons free.

My first job, after breakfast (hard bread left over from the night before at the restaurant, with some cheese) was to peel potatoes. Lots of potatoes. One of the things they offered at the restaurant, besides crêpes, was raclette, a kind of cheese that is melted at the table for the diners to scrape off and eat with potatoes.

After that I spent the morning with their child, a very sweet little boy. We walked around town and got to know each other and it was fine.

However, Sophie, in particular, had very specific views about child-raising. Apparently she had established a routine for toilet-training, and I had to follow it. At pre-determined times of the day, her child was expected to pee. So at those times, we had to be in the house, and he had to sit on his potty until he produced.

I was expected, then, to enforce that. In other words, I had to force him to stay seated on that potty.

Even at 21 years old, I knew this was a bad idea: making toilet training such an issue, and at such an early age. And he ended up sitting there, sometimes, for an hour.

Within a day or two, Sophie, some sort of amateur shrink, decided that the reason he wasn’t peeing on schedule was that he perceived my arrival as a threat; that I was trying to replace his mother in some way.

So, she announced, she would take care of him, and I would work in the restaurant instead.

I agreed, since the restaurant seemed such a pleasant place. And it was: it was popular and people were friendly and very interested in this French-speaking American who’d appeared in their midst.

The problem was the work. My free time from noon till 4:00 never materialized.

Starting at about eight in the morning, I was expected to work all day. I peeled the potatoes first, but soon the lunch crowd started coming in. I waited tables, but also bussed them and did kitchen work. In the lull after the lunch rush, we took about a half-hour to sit outside and eat lunch, enjoying the midday sun (warm despite it being mid-winter). Lunch still involved day-old bread left over from the restaurant, though, and there was no lingering. Back to work we went because the dinner rush started early. Sophie joined us as soon as she’d put the kid to bed.

Each evening, at about 10 o’clock, I would announce that I was going to bed. Waiting tables wasn’t a bad job, but by that time I’d been working literally all day. So had they, for that matter.

They would scowl at me, but accepted it. At this point the worst of the dinner rush was over, though there would still be people there till as late as midnight.

Another thing: people left me tips at this restaurant, but Emil said they pooled their tips. I was the only employee, yet I never saw my third of the cash; Sophie and Emil took it all.

Within a couple of days, I expressed an interest in learning to ski, so they arranged ski lessons for me. That got me an hour and a half off in the middle of the afternoon, in the time when I should have gotten four hours free.

As you can see, this was a ridiculous situation: I was working from 8 in the morning till 10 at night, with only about a half hour off for each meal and one hour for the ski lesson. And this was every single day, because the restaurant never closed. I was only being paid a pittance in spending money, which I had no free time to spend, plus room (if you could call it that) and board (What I wouldn’t have given to eat some fresh French bread!). At the restaurant, I met all sorts of interesting, fun young people who were interested in me as well, but I could never spend any time with them because of my long working hours.

It lasted about a week before I quit. It wasn’t what I expected or wanted, and I felt exploited. Their response? “But our last au pair was fine with it!” There were plenty of young people I’d met in the restaurant who would have been able to work in that restaurant. The only problem was this couple’s unwillingness to pay anyone a living wage. I wasn’t even getting the legal au pair wage.

Within a week, I had found a much better job in Lyon, with a great family who made me feel welcome and even taught me to cook.

With the Lyon family, I even got to join them for a vacation in the Ardeche. That’s me in front.