This week’s 1001 Travel Tales podcast has a literary theme. Deb Thompson, of justshortofcrazy.com, tells about her experience following the historical footsteps of Laura Ingalls Wilder.

To listen on Soundcloud, just click on the image below. If you prefer to download the podcast, you can do so here on iTunes or here on Stitcher.

If you prefer reading to listening, head over to Shobha George’s website, Just Go Places, to read the transcript.

Please remember, once you’ve listened to 1001 Travel Tales podcast, to leave a rating and/or a review. It’ll help us reach more listeners. If you’ve already done so, thank you!

Like Deb Thompson, I loved this series of books as a child, and, like her, I was surprised later to realize that she was a real person and that her books described her life. I would love to do the trips that Deb describes in this podcast!

In case you’re interested in a similar journey, I’ve collected the links and information below. I’ve rearranged the order to reflect the chronology of Laura Ingalls Wilder’s life, rather than the order that Deb Thompson visited each one.

This is the place where Laura was born, and where she later set Little House in the Big Woods. Here you can visit a replica of the log cabin where she was born in 1867.

Laura and her family moved to Independence, but didn’t stay long before moving back to Wisconsin. They had unintentionally settled on the Osage Reservation and received an order from the government to move out about a year later. Nevertheless, with a little artistic license making her older than she in fact was, she set Little House on the Prairie there.

At the Little House on the Prairie Museum in Independence, you can visit a replica of the log cabin Laura lived in for that one year as well as an original 1871 schoolhouse and a post office from 1885. You can also see the actual well that Pa (Charles Ingalls) dug by hand.

As Deb pointed out, this is where Laura set her book, On the Banks of Plum Creek, and where Laura lived with her family in a dugout. You can visit the site, but the dugout itself isn’t there anymore: only a depression in the ground marks the spot where it was. 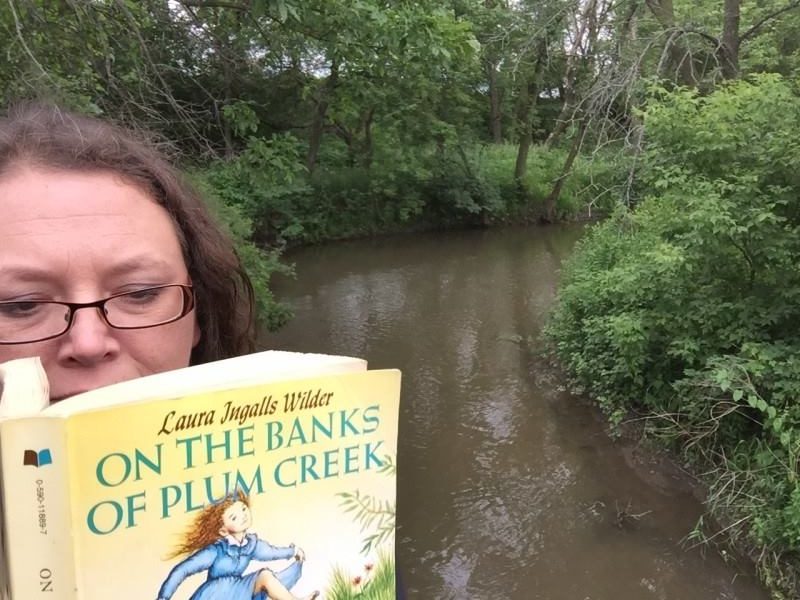 The Laura Ingalls Wilder Museum in Walnut Grove doesn’t seem to hold much in its collection that is directly linked to the author except for some historical documents and a quilt. It’s more of a “settlers on the prairie” museum than anything else, with a doll collection, displays about covered wagons, and several historical buildings. They also house memorabilia from the Little House on the Prairie TV series.

If you visit in July, don’t miss the Wilder Pageant, a drama based on the books.

While you’re in Minnesota, check out Sod House on the Prairie in Sanborn, which we also mentioned in the podcast. They have a collection of replica sod houses that you can explore, set in several acres of restored prairie.

(The one I said I remembered in the podcast was in South Dakota: The Prairie Homestead. It looks like it’s much more geared toward tourists than when I visited back in the dark ages.)

They moved briefly to Lake City, Minnesota, and then lived for a short time with relatives in South Troy, Minnesota, where Laura’s baby brother, Freddie, died. Next they moved to Burr Oak, Iowa, and then back to Walnut Grove. 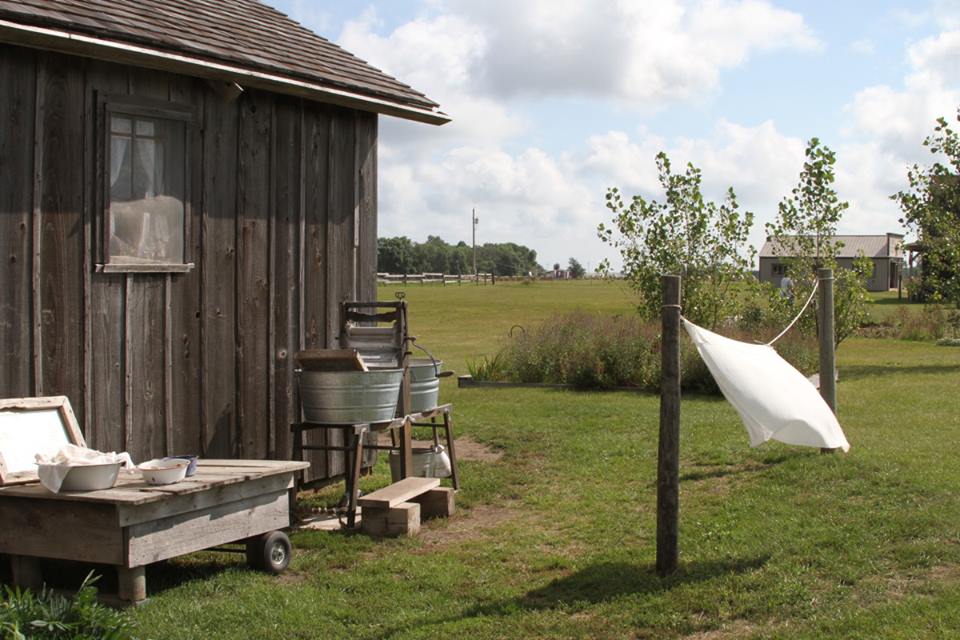 After a string of bad luck in Walnut Grove, the Wilder family moved to Burr Oak, where Charles helped manage the Masters Hotel, now the Laura Ingalls Wilder Park and Museum.  A guided tour tells about that one year when Laura and her family lived in the hotel before moving back to Walnut Grove.

De Smet, South Dakota is where Laura set By the Shores of Silver Lake and then The Long Winter, Little Town on the Prairie and These Happy Golden Years. Its museum, called Ingalls Homestead, focuses on actively learning about the pioneer days, offering experiences like riding a covered wagon, attending a lesson in a one-room school house, making a corncob doll, or washing laundry by hand using a washboard. This is also where, as Deb Thompson told us in the podcast, you can spend the night in a covered wagon. 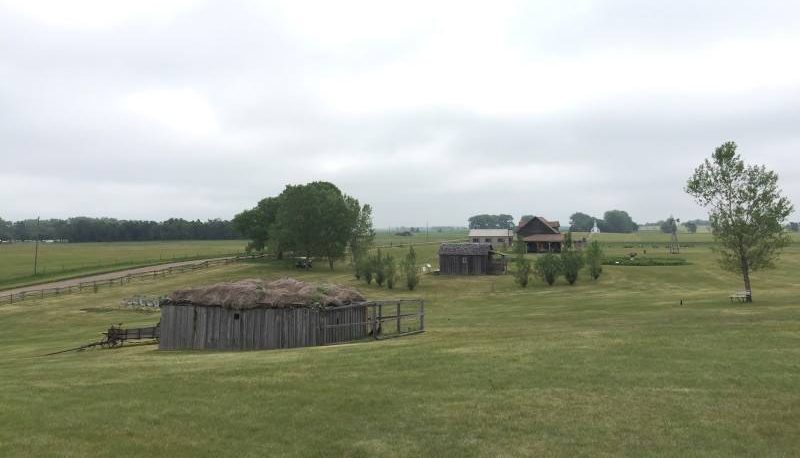 The Laura Ingalls Wilder Historic Homes Tour is worth taking as well. It takes you through two of the homes in De Smet where the Ingalls family lived. The Surveyor’s House was their home while Charles Ingalls worked for the railroad. Laura described it in By the Shores of Silver Lake. Later they moved to the home that Charles built for his wife, Caroline. By this time, Laura had married Almanzo Wilder and moved out.

The tour also includes the schoolhouse that Laura and her little sister, Carrie, attended, and a replica of the school where Laura first served as a teacher.

Other Laura Ingalls Wilder-related things to see in De Smet include the Loftus Store, which appears in The Long Winter. You can also visit the Ingalls family grave site, and the Congregational Church, which Charles Ingalls organized and partly built himself.

Laura didn’t move to Mansfield until after she married, but it’s important to the story because it is where she wrote the books. The Laura Ingalls Wilder Historic Home and Museum includes two different houses: a farmhouse that Laura and her husband lived in for many years, and a more modern house that their daughter Rose gave them later. Laura wrote the first four books at the newer home, but then moved back to the farmhouse. 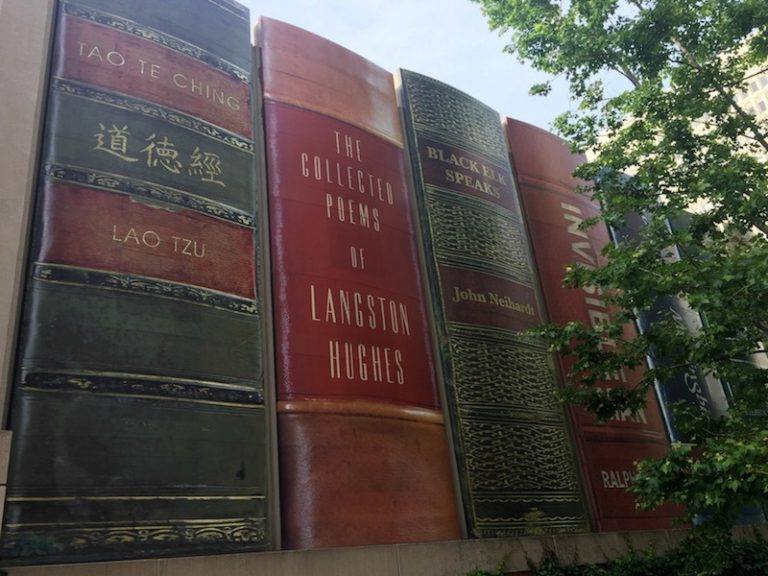 Have you ever built your travel plans around an author or a book? Leave a comment below; I’d love to hear your ideas!