Believe it or not, I actually went to church this morning. And, what’s more, it was my second time in church this year. The first time was back in May in Connecticut, but that was only because my daughter was playing in the church’s bell choir that morning.

I wasn’t going to go, but everyone else decided they wanted to, and I just thought I’d feel lonely sitting at the hotel all morning by myself. It’s not like this hotel has a pool, or a massage service, or television, or anything else that would keep me entertained!

It was the Catholic church here in Kirundo that Stephanie and her husband Severin attend when they’re here. Stephanie is the organizer of this project, and her husband has been helping out in various ways. There was a stream of people walking toward the church, the women wearing wonderful bright clothing, and the little girls wearing frilly dresses. We, as usual, arrived by van, and when we all piled out and entered the church, two rows of pews magically cleared for us. That deference to whites was something I distinctly didn’t like in Malawi, and I don’t like it here. At the same time, I understand what a spectacle the group of us presented as we walked in there.

The church building is quite impressive, made out of red brick, but not as simply designed as I would expect in such a poor country. It’s shaped traditionally like a cross, and the sides had a row of columns linked by arches, and on top of those arches was a row of much smaller pillars, in turn linked by smaller arches. All of this – walls, columns, and arches – was done in neat red brick. Along the wall were a series of simple drawings concerning Jesus. I couldn’t see many from where I was sitting, but I think they were of the stages of the cross. The high windows were simple stained glass, done in patterns in just a couple of colours, and above the altar, which was adorned with brilliantly bright fake flowers, was a rather standard-issue crucifix.

What was also impressive was that there were about 2000 people at the service, if we figured correctly. According to Severin, they have four or five services every Sunday, and they’re all that crowded, week in, week out. Today was a baptism day, which, again according to Severin, they hold about three or four times a year. And there certainly are enough babies to baptize: the whole service was filled with the noise and movement of babies and children. This was not just the usual fidgeting that children do at religious services: it was babies crying, mothers shifting the babies around from their backs to their fronts so that they could nurse, babies coughing, mothers handing out food to their children to keep them quiet, and so on.

The whole service, with the baptism and all the usual parts of a Catholic service, took 2 ½ hours. We were stared at through much of that. That was one of the reasons I never would have been able to stay in Malawi: you never ever will be able to fit in if you’re white in a black country. We just stand out. And I remember now how I got tired of that: how everyone stared everywhere I went. How children pointed at me and called me “azungu,” which means “white person” (as if I wasn’t already aware of my skin colour!). How I was always treated differently than everybody else, like we were today when people vacated the pews for us.

Anyway, I’m glad I went. The music was lovely: simple singing, but with some beautiful harmonizing, was the highlight for me. Also, after the service, we decided to walk back, since it wasn’t really very far, and that felt delightful, after so many days only traveling by car or van. 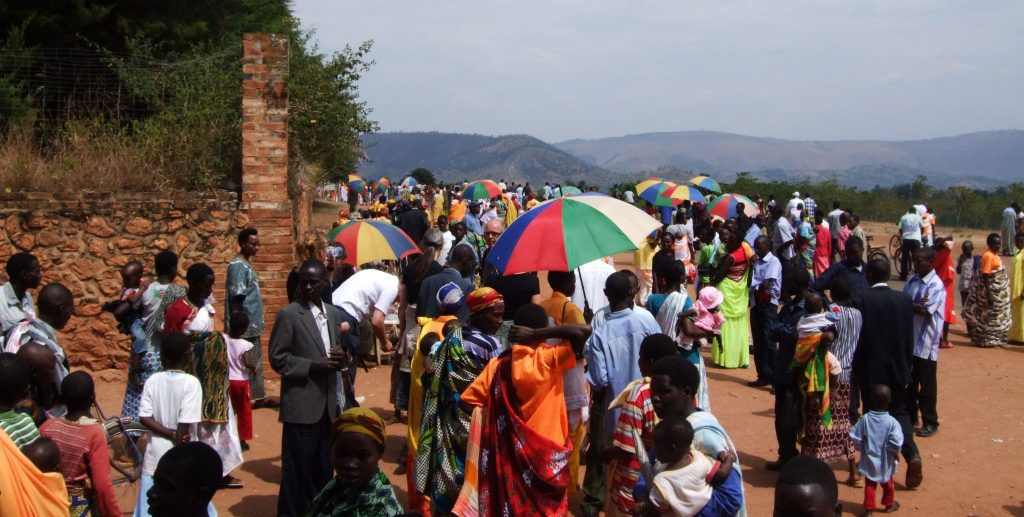 the crowds leaving the church

We joined the stream of people leaving the service and had a chance to really look around, rather than whizzing by. We haven’t done that before: we were warned repeatedly about it being dangerous, but this didn’t feel dangerous. We got a lot of smiles from people, and some came up and shook our hands to welcome us. I think the warnings were really more about walking on the streets alone, or after dark.

Last night at dinner we ordered a bottle of wine. What came was a bottle of sweet communion wine; it was labeled that it was exported from Italy specifically for use in church services. I read the label and said to the group “God will get me for this!” He did: he got me into a church. But I’m not going again next Sunday: twice in a year is way over my quota!