We often forget that California history goes further back than the “49-ers,” the gold prospectors who hurried to California once gold was discovered in 1848.

The first European settlers in California were not “49-ers;” they were Spanish. California belonged to Spain from 1769 to 1821, and then to the Mexicans until the US got it back in 1848 after winning the Mexican-American War. 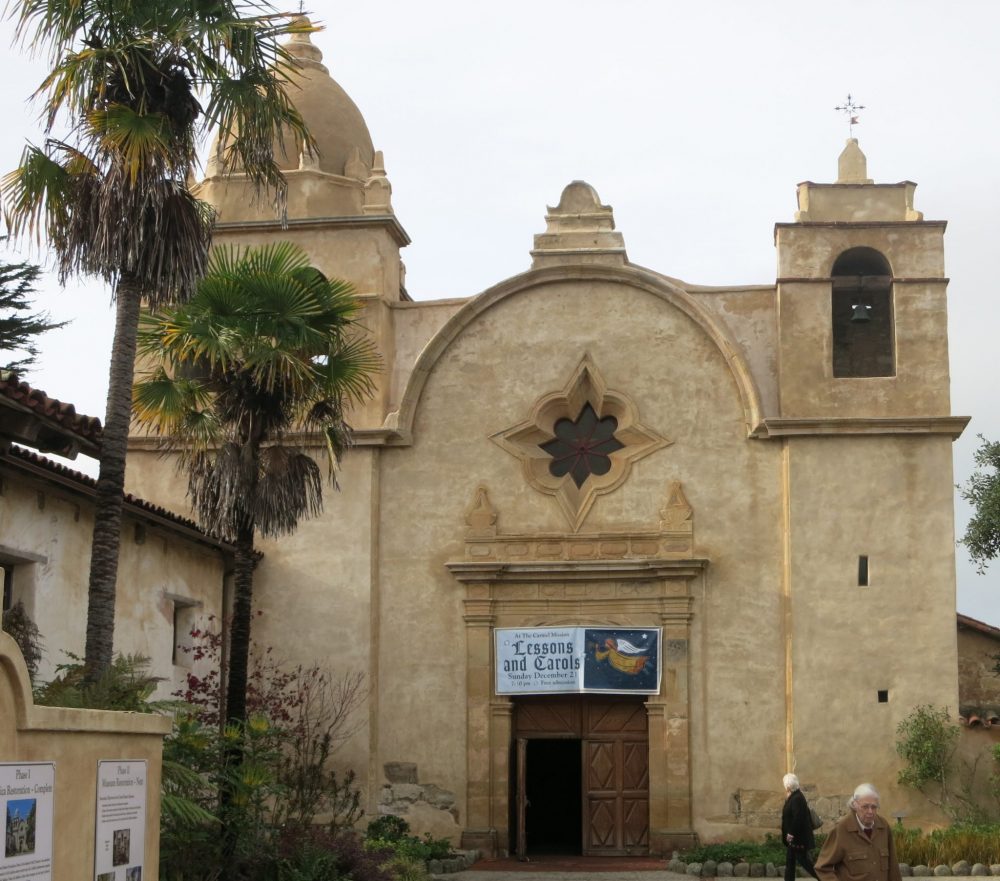 Carmel Mission: except for the sign in English it could be anywhere in Latin America.

The Spanish in the New World, besides looking for gold, set out to expand the Spanish colonial empire, along with spreading Catholicism. They established a string of 21 missions along the coast of California, all of which are still standing.

On my recent visit to California, I visited two of them. Carmel Mission (properly called Mission San Carlos Borromeo Del Rio Carmelo) in Carmel is the second oldest of the missions, built in 1770. Mission Dolores in San Francisco was built in 1776, making it the oldest surviving building in San Francisco.

If you’ve ever travelled in Latin America, you’ll feel like the Carmel Mission was simply picked up from some small sleepy South American town and plunked down in California. Architecturally it is very Latin American: built of adobe covered in plaster, with bells set up high in the front wall, and Native American-influenced paintwork on the inside.

The cemetery outside contains a few rows of graves marked by wooden crosses. Each wooden cross has a large seashell hanging on it or on the grave itself. I assume these mark the graves of Native Americans. On the opposite side of the path stand the graves of the European part of the congregation: these have stone markers. One of them claims the person lived to 151 years old! 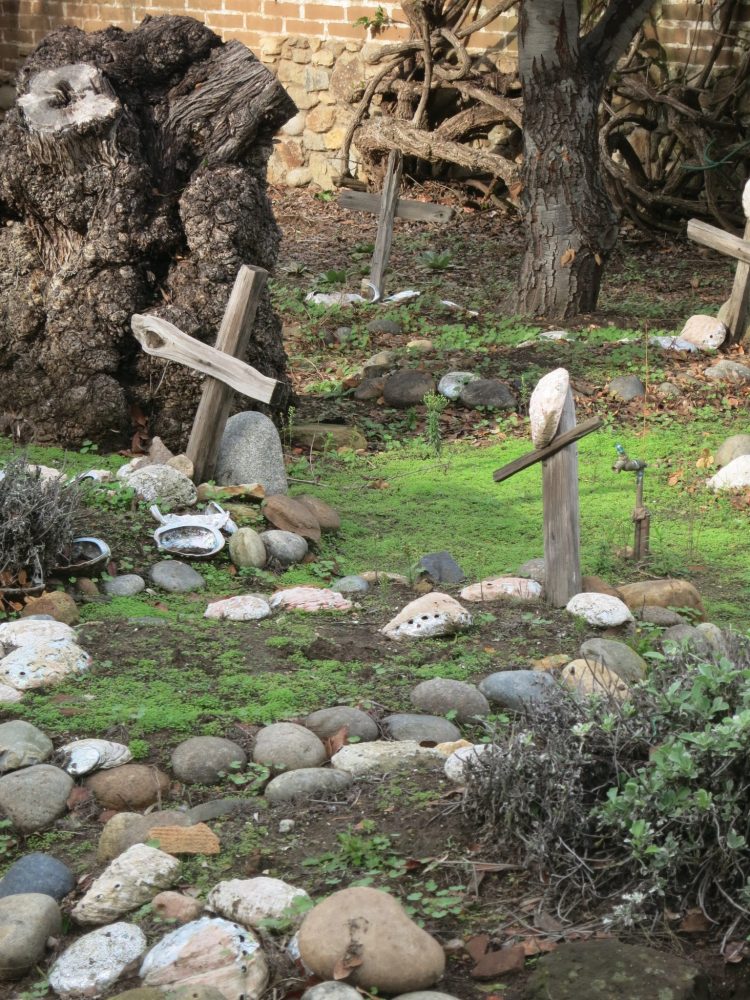 Some of the graves in the Carmel Mission graveyard

There’s a large cloister as well, planted with bougainvillea, aloe plants and so on, again looking like it’s from somewhere else: a peaceful place to sit.

Mission Dolores in San Francisco is very similar to Carmel Mission, built in almost the same style, but today completely surrounded by other city buildings, including the Catholic Basilica next door. Again, it’s the original adobe building, this time with a painted ceiling in Native American style. The graveyard in this case is a quiet, lush oasis in the city. I was inclined to just sit and soak in the sleepy atmosphere. 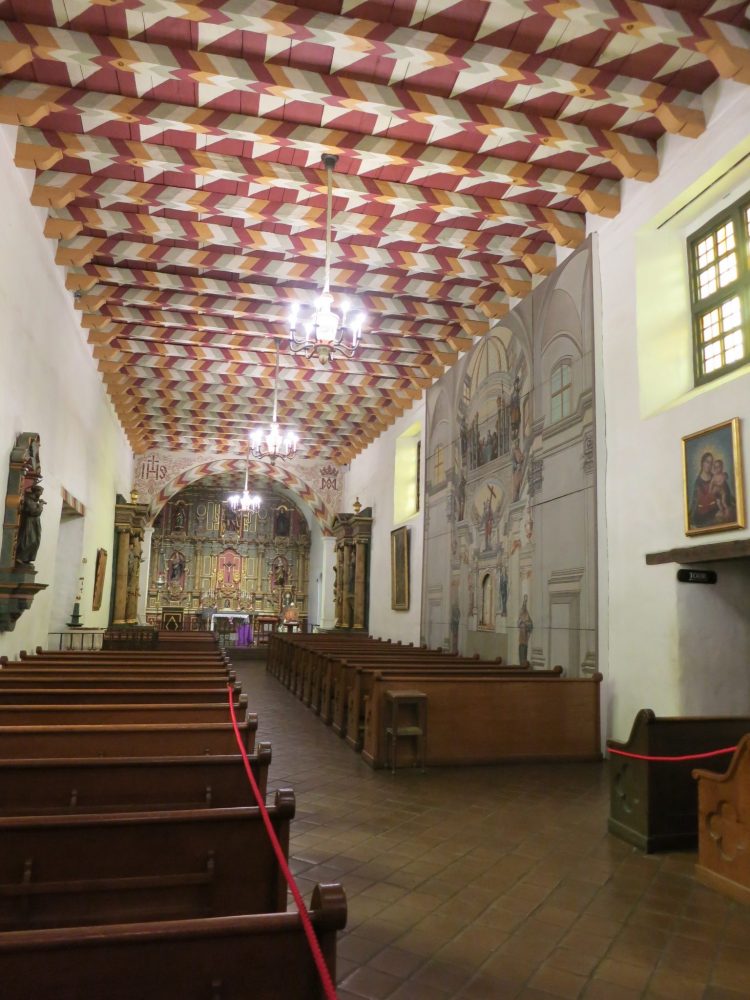 The interior of Mission Dolores in San Francisco

In admiring the quiet beauty of these missions, though, it’s easy to forget what they represent: the first disruptive encroachment of European society into a peaceful, thriving Native American culture in California. These churches were very likely built and supported by Native American laborers, who converted—or were converted—to Christianity. They were coerced into working for the Spanish, and, according to Wikipedia, the fount of all knowledge, treated more or less like slaves. They were unpaid, and soldiers were sent to recapture them if they left. In addition, death rates were appalling, often from diseases brought by the Europeans. 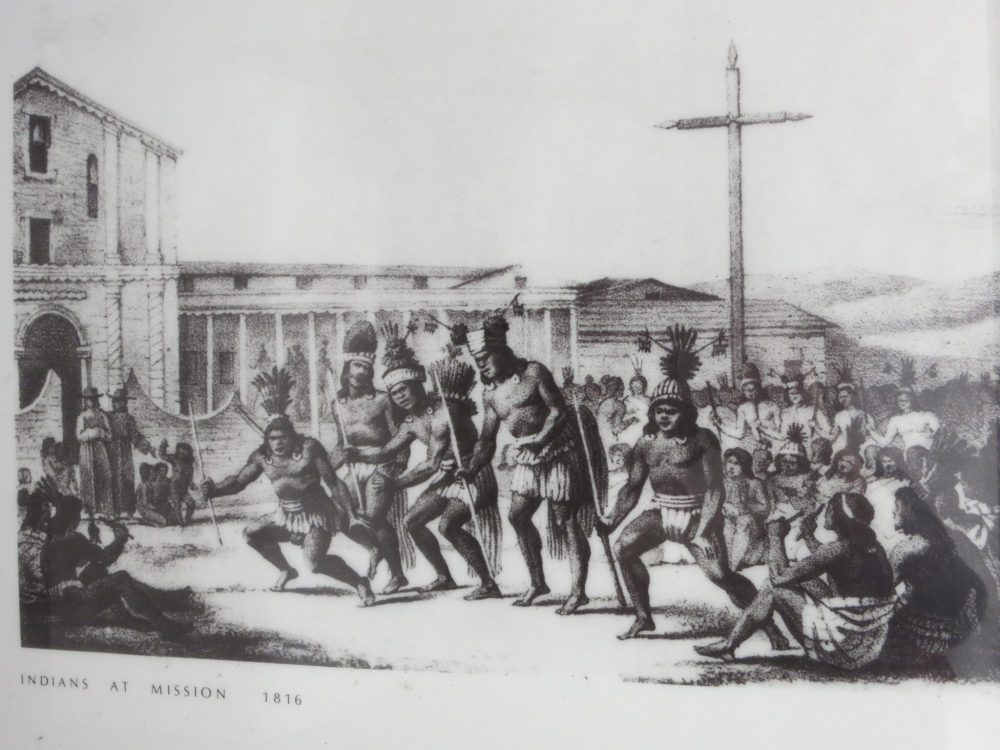 A depiction of Native Americans at Mission Delores, on display there.

Mission Dolores has some interesting displays about the lives of the original Native American inhabitants. Decimated, their history has been reduced to some artifacts, a diorama and some explanatory signs. Nevertheless, at least they are receiving some attention these days. A reconstruction of a traditional reed hut stands in the graveyard there.

The class distinction between the Spanish arrivals and the native inhabitants was clearly very strictly maintained, as evidenced by the separate sections of the graveyard at the Carmel Mission. It’s strange to take in this peaceful atmosphere today, and realize what violence and suffering was necessary to create it all those years ago. 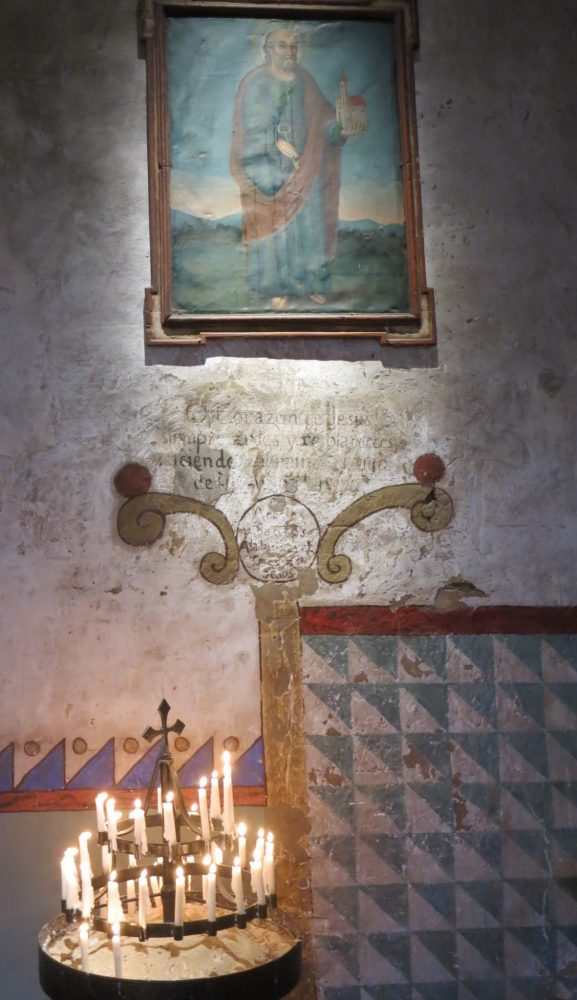 An interior detail in Carmel mission

I assume that if you are of a religious inclination, both of these churches would welcome you to take part in services. We happened to visit Carmel on a Sunday and a service was ending as we arrived.

If you are religious, or if you’re interested in the architecture or history, this would be an interesting way to visit California: traveling along the coast (a gorgeous drive in itself), viewing all of the missions one by one, south to north or vice versa. Since the intention was for them to be one day’s horseride apart, 30 miles separate each from the next.

If you do so, please don’t forget to consider the Native Americans who contributed their labor and often their lives to create these lovely, peaceful places.