Yesterday my friend, Kim, and I visited Marseille’s medieval church of Saint Victor, parts of which date back to “paleo-Christianity”; in other words, the fifth century or so. 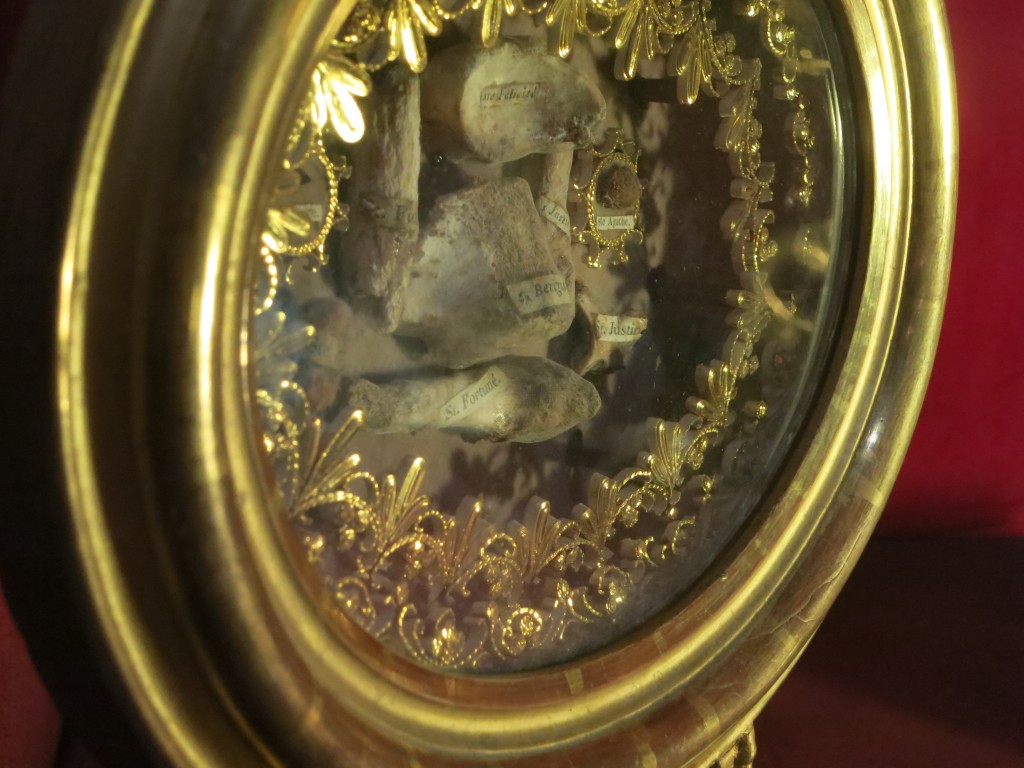 a reliquary with bones of several different saints

I love visiting medieval buildings; it doesn’t matter whether it’s a church, a castle, or just a humble house, as long as its original details are still visible. We both immediately noticed that medieval building smell, too: a cold, musty odor that seems to seep directly from the stones of the walls around us. 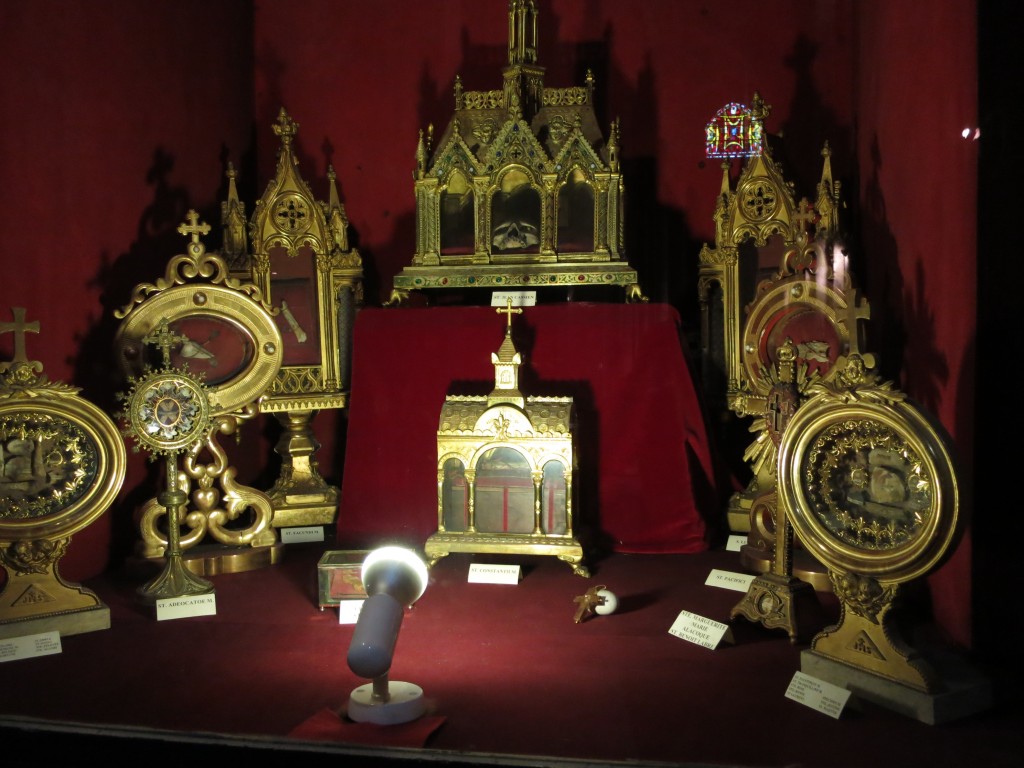 a display case full of relics from 25 different saints

This church has a large collection of relics of various saints, all displayed in gold filigreed holders of various sizes and shapes. They were mostly clustered in a couple of display cases; I counted the relics of 25 saints in one case and 17 in the other, and there were a few more here and there elsewhere in the church.

The relics included pieces from the cross on which Saint Andrew, one of the original apostles, was crucified. But most of the relics were bones: fingers, jaws, legs, pieces of skull.

Macabre: that’s the word that I kept thinking as I inspected these displays. Also: ghoulish. Someone felt the need at some point, whether it was soon after the particular saint died or centuries later, to dig up that person’s bones and take a piece or two.

They might have been after a profit from selling the relics, but that implies there was some demand as well.

And that’s my question: why would anyone want these?

Wikipedia’s definition of relic says that it is “carefully preserved for purposes of veneration or as a touchable or tangible memorial.”

So people “venerated” these bones. I assume that, since saints are considered holy, and thus closer to God, the people who saw these bones felt closer to God themselves through seeing them. Contact with what’s holy made them feel blessed.

Okay, I think I get that. And it fits in my general image of what medieval society was like: people lived in a general state of dread and dismay and superstition. The Middle Ages were dangerous times – wars, plagues, general filth and disease – and Christians were very concerned with ensuring a place in heaven for themselves, since they were more likely to get there sooner than later.

But is that still the same nowadays? Why are these relics still on display?

I’m going on the assumption that people won’t dig up Pope John Paul II’s bones when he’s made a saint. Or will they? Perhaps the Catholic Church itself will cut out the middle man and disinter him themselves. Then they could cut up the skeleton in lots of little pieces and sell them on EBay for outrageous sums of money.

I’m pretty confident they won’t do that. It would be sacrilegious. It would be disrespectful. People who have died should rest in peace. We frown on disturbing graves except for the best of reasons, such as forensic investigations, and even then we bury them again afterwards. 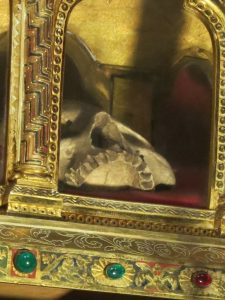 So, again, why are these relics still on display? I noticed that one of them was the upper jaw and front of the skull of Saint John Cassian, whose tomb is down below the church in the crypt. It would be easy, at least in that case, to reunite his skull with the rest of his remains.

I can only assume that the relics still are “venerated,” to use Wikipedia’s word, so they still serve the original purpose. Is that so? Do practicing Catholics, or the tourists I saw praying there yesterday, still feel touched by the holiness of these saints?

The rest of us, the non-Christians or non-believers like me, shuffle through the church, taking pictures, as I did, and peering closely at the relics. I did feel rather ghoulish looking at those bones. It didn’t feel proper. It felt like disturbing the dead.

What do you think? Should medieval relics be preserved, or returned to their graves? If you’re religious, does seeing relics help you feel closer to God?