Well, I’ve been travelling around Australia for the last month, and this is the first chance I’ve had to sit down and add anything to my blog.

In case you’re curious, I’m at a sort of bungalow park called The White Cockatoo about an hour north of Cairns, in Queensland. Yes, if you’ve checked the link, it is indeed a nudist resort, but only half the year, NOT this half the year! Everybody I’ve seen around here is fully dressed, thank you very much!

Anyway, instead of boring you with a blow-by-blow account of my travels, most of which would sound an awful lot like everyone else’s account of their travels around Australia, I’ve been keeping very occasional notes of things that struck me as interesting or unusual. I’ll only post those, in the form of “comments” about Australia. I should have time to post one or two tonight, and then I’ll post the rest when I get home in a week or so.

So here’s My version of “The Truman Show”:

To get here, we flew first to Frankfurt, then Singapore, then Darwin, then Cairns (pronounced like a New Englander would say the word “cans.”) It struck me as very much like the movie with Jim Carrey called “The Truman Show.”

In my version of the movie, the discontinuity has to do with travel. You get in a plane; you sit for x number of hours. The plane could be any airline, going anywhere. Really, every plane is like every other plane, isn’t it? Perhaps the seat cushions are a different colour, and perhaps there are screens in the seatback rather than hanging from the luggage rack, but basically, they’re all the same.

What you see out of the window is always the same: a city getting smaller until your view is blocked by clouds, after which all you see is clouds until the descent at your destination, which looks strikingly like the place you came from. In the air, there’s no sense of motion at all, except for the occasional turbulence and the rising and falling sensations of the takeoff and landing, which are the only times you sense any forward motion at all. 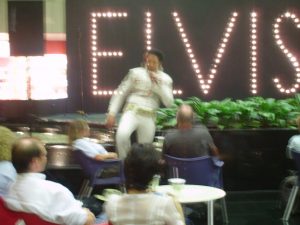 an Elvis impersonator in Singapore airport. Sorry that it’s so blurry; it generally doesn’t even occur to me to take pictures in airports, so I have very few to choose from. (He was particularly bad, by the way.)

After x hours you get off the plane and you’re somewhere else. Yet it looks just like the place you came from. Perhaps the seat covers in the waiting rooms are a different colour, but the views out the windows are the same (runways, airplanes) and the shops are the same (duty-free liquor, perfume and cigarettes, plus expensive name brand shops like Louis Vuitton). The signs are all in English.

So the question is: what if it’s all a fake? What if it’s like one of those flight simulator rides at a carnival and what’s really changed is the set, not your location? I know, it’s ridiculous, but that’s how I felt getting here. We went through a sort of endurance test of airplanes and airports. Then suddenly we’re in a different place with palm trees and left-side driving. It feels fake. It feels impossible!