After just a few days in Athens – actually, after just a few hours the first day – I could draw one clear conclusion: Athenians are friendly, welcoming people.

And this isn’t just about how well we bloggers were treated at the TBEX (Travel Bloggers’ Exchange) conference. I expected that: anyone in the travel industry would be crazy not to treat travel bloggers well.

If a travel blogger with a big readership slams a destination, hotel, tour or whatever, the post could fade into obscurity in a matter of weeks. Or it could go viral and push that business into bankruptcy.

So I’m not talking about the local sponsors who were so good to us, particularly the Athens Convention and Visitors Bureau and their This is Athens campaign. And they were very good to us! Thank you!

I’m talking about people in other tourist-related businesses who didn’t know I was a blogger. Everyone I came in contact with was kind and helpful and generous.

In a restaurant where I had lunch after a great walking tour.

The tour was provided as part of the conference, and was a fascinating journey around the three major religions of the Ottoman period of Athens. I’ll post about that soon. (Disclosure: I was provided the tour for free, but found it interesting enough to ignore my grumbling stomach and the fact that I was soaked, including my feet in canvas sneakers, after a torrential downpour.)

This is the name of the restaurant. I think it’s called Epeiros and it’s in the meat market.

I can’t be sure, but I don’t think the restaurant owner knew our group was part of the conference or that we’re travel bloggers. She knew we’d just finished the walking tour though. She explained clearly what all our choices were (pointing at vats of stew as she spoke) and took good care of us. Then, besides the excellent traditional stews we ate, we were offered a serving of halvah after the meal, as well as a shot of some sort of strong liqueur that I think might have been metaxa. Perhaps it is customary in Athens to offer free dessert and liqueur, but that doesn’t make it any less admirable!

It happened again later that afternoon. I stopped with one of the bloggers for a drink in a café. Our coffee and tea were served, not with a small, mass-produced cookie as is usual in the Netherlands, but with a significant-sized piece of what my fellow blogger, an Italian called Francesca, identified as pasta flora. It was jam cake, clearly homemade and delicious!

Again, this might be the norm, but I love it.

a café in Athens: not the one we stopped at but I like the picture!

A particular shopping street, Pandrossou Street Market, below the Acropolis, organized a street party for the bloggers on the last night of the conference. We were offered tastes and samples up and down the street. This was laid on specially for us, so I can’t attest to how they operate on other days, but in any case it’s a pleasant shopping street with some businesses I would have loved to explore further, if I hadn’t sworn to myself not to buy anything. 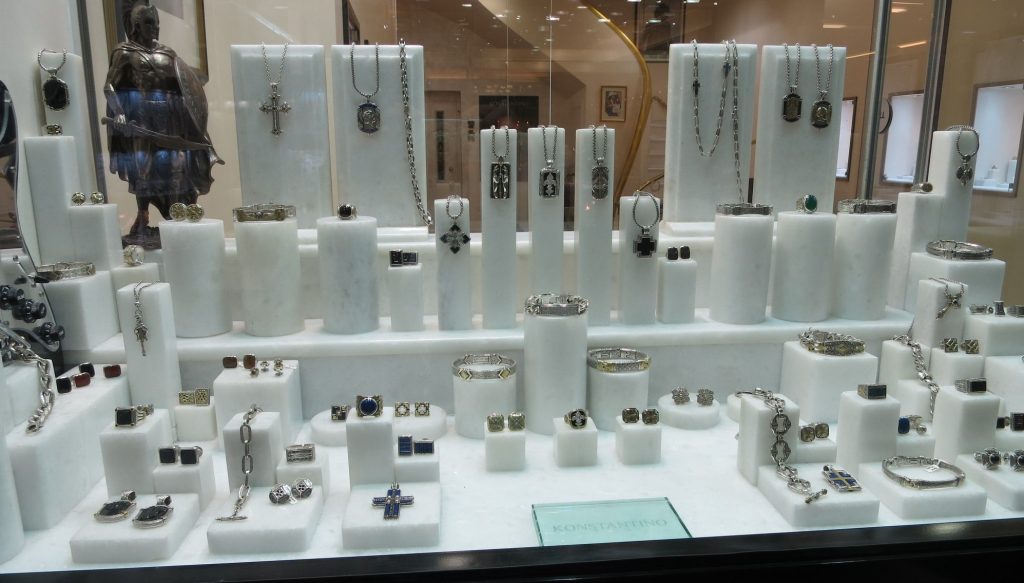 I struck up a conversation with a shop girl who was watching the bloggers and other tourists pass outside her shop. I didn’t go in, and she didn’t make any attempt to entice me in. Instead, we had a conversation. She didn’t know what the conference was about, but her general friendliness and openness in asking me and sharing her thoughts with me was a joy.

Have you been to Athens? What were your impressions?